The President of the United States of America apparently loses no sleep about the fact that his country hosts the world's only concentration camp since Treblinka, Dachau and Belsen and the like. He even seems rather smug about the whole idea, justifying its existence to Germany's Chancellor Merkel as being necessary for the protection of the USA.

The absurdity of the argument is taken a step further by Sean McCormack, spokesperson of the US Department of State, who declares that “If these people were released, they would be right back in the fight.” 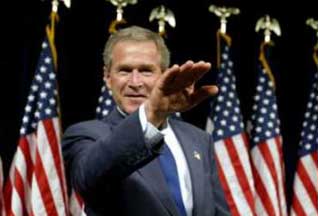 Well, that is as an arbitrary comment to make as any. In a civilised society, people are held for trial based on some form of evidence and a formal charge is brought against them.

Civilised society:
Use the UN Security Council for crisis management

Bush's cowboy society:
Lie, cheat, cajole, forge documents and if nothing works, just deride all norms of international law anyway. What the hell, treaties are only worth the paper they're written on and most countries can be blackmailed or bullied into doing what we want.

Civilised society:
Hold prisoners of war properly under conditions set out by the Geneva Convention and release them after the end of hostilities. If prisoners are not prisoners of war, then they must be charged formerly under a criminal code, and tried in a competent court of law.

Bush's cowboy society:
Round up as many people as possible who look like they might have been fighting, kidnap them, place them in a foreign country and hold them without any charges at all for four years. Urinate on them, torture them, deprive them of sleep, pee in their food, insult them, kick them when on the ground, force them to soil themselves, make perverted sex threats and then release some of them because Tony Blair had a quiet word with Bush.

Civilised society:
Treat people in a humane and reasonable fashion

Bush's cowboy society:
Shunt people off into medieval-style prisons, empty the prisons and mental institutions of the USA and ship these people off to be guards. Sodomise the prisoners, wire up their testicles with electrodes, have sluts like Lynndie England with cigarettes hanging out of the side of her mouth abusing the prisoners, set dogs on them and force them to eat food they cannot eat under their religious practices.

Not very encouraging. And following the argument of Bush to its logical conclusion, the prisoners kidnapped at the Guantanamo concentration camp will never be released because they might be a threat to the USA.

After the way they have been treated, no wonder. They must be so filled with love for the USA, along with their families and anyone who has seen the appalling images of the wanton humiliation of human beings, certainly they will all want to stand with their hands on their hearts singing God Bless America.

George Bush is after all such a wonderful ambassador for his country. His regime has made the international image of the United States of America parallel to a medieval torture chamber and acts of mass slaughter of innocent civilians.

Not bad for five years.