The Moscow Patriarchate hierarchy could not but take note of the sexual revolution in Sweden where the Lutheran Church had blessed same-sex marriages. During the last annual meaning of the Holy Synod, The Russian Orthodox Church decided to break up the relations with the Lutheran Church of Sweden. 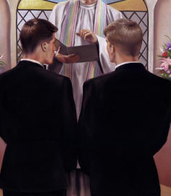 “It is with great disappointment and sorrow we have learned that the Lutheran Church of Sweden not only failed to oppose the so-called same-sex marriages but also issued a decree to establish an official blessing rite for those marriages,” says a statement issued by the Synod. “Approving the shameful practice of same-sex marriages is a serious blow to the entire system of European spiritual and moral values influenced by Christianity. Such novelties undermine the moral foundations of European civilization and cause irreparable damage to its spiritual influence on a worldwide scale,” says the above statement.

The Evangelical Lutheran Church is the largest Protestant Church in Sweden; it holds the status of state religion. On 27 October 2005, the assembly of the Lutheran Church of Sweden decided to approve church wedding for same-sex marriages. The Swedish church was not the first to stand up for the rights of homosexuals. One Jean Robinson was ordained bishop by U.S. Episcopal Church in November 2003. Aside from being a homosexual, Mr. Robinson also advocated the freedom of relations between two men and two women.

The Russian Orthodox Church had to react in a very radical manner back then. The Moscow Patriarchate said that it had disbanded the Joint Coordination Committee on Cooperation between the Russian Orthodox Church and U.S. Episcopal Church. The relations between the two churches in the field of theology, humanities, and socio-religious issues were suspended too. According to the Moscow Patriarchate's foreign relations department, the two churches had maintained cooperation for more than 200 years.

Six months ago, the General Synod of the U.S. United Church of Christ already passed a resolution allowing priests to bless same-sex marriages. The church became the first U.S. religious organization of the Protestant denomination that approves homosexual marriages.

As it turned out, some priests on this side of the Atlantic had liberal views on the relations between sexes too. The Evangelical and Lutheran Church of Sweden became the first major religious organization in Europe with which the Russian Patriarchate had to sever all relations.