Bush: Unfit for the position

George W. Bush proves that he does not have the qualities needed for his demanding position

For George Bush, today is a great day. A bloodthirsty tyrant was removed, the people of Iraq have today voted freely for the first time in decades and a nice. Western-style democracy has been installed in a country which never had one. So today, George W. Bush is a satisfied man because he believes it is really that simple.

What George Bush does not know, because he is incompetent to be in his position, is that when the law is broken, someone has to take responsibility for the crime. Let us use an analogy from the Far West. There is a man who terrorizes his neighbourhood and who has killed a number of neighbours who he considered were his enemies. One day a lynch mob not only kill him, but kill his children, set fire to his house and raze the foundations so that a new one can be built. The neighbourhood settles down again. 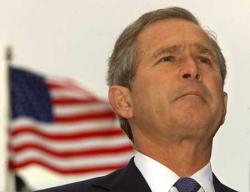 For cowboy-magazine-intellect George Bush, that is fair enough. But the sheriff might have something to say about it. This is exactly the same analogy that might be used by some lunatic who pulls out a gun, shoots George Bush and claims that he did the right thing because the world is a better place. It is wrong.

Under international law, there has to be a reasonable casus belli for an attack on a country and under the UN Charter, there must be a resolution – a singular and separate resolution – on the use of force. George Bush knew this because so much energy was spent on getting consensus in the UNSC for such a resolution.

Iraq was attacked anyway, against the UN Charter and against international law. The casus belli at the time was that Iraq had WMD. It did not.

So far, we have a broken UN Charter, a breach of international law and an illegal and in the event murderous attack on a sovereign nation. 27,000 civilians were murdered and George Bush is satisfied with that?

Appalling behaviour from US Armed Forces and Security Forces

The many, widespread and shocking cases of torture not only in Iraq but also in Guantanamo and Afghanistan by US personnel, the widespread cases of rape, the widespread cases of disrespect for a person's integrity, the wholesale slaughter of communities going about their daily lives belong to the Middle Ages, a period of our collective history which is thankfully behind us and which we have been trying to digest for centuries.

If George Bush can say he is a satisfied man today after all this has gone on, then he is either cruel and callous and unchristian, or else he needs some help from a healthcare professional.

The main reason why George Bush is unfit for his post is that he has proved, time and again, that he is incapable of seeing the wider scene. George Bush does not realize that the new political players in Iraq were brought in from the margins of Iraqi society. They were hurriedly huddled together in a London hotel and told theywere the new team.

If the election went ahead today, many Iraqis have no idea who or what they are voting for. What they have done is to legitimize a group of marginal people, many of whom are reactionaries and conservatives and bring them into center stage without any of them ever having had a leading part.

Sooner or later this is going to have its consequences – the same consequences we see today through George Bush being in his post but being incompetent to hold it.

The insurgency is not welcomed by most Iraqis but while the foreign invasion force is in Iraq, the insurgency will continue and therefore compound the problems caused by George Bush's invasion for the daily life of the average citizen.

Is the average Iraqi better off now than under Saddam Hussein? No, and most people who are asked admit it. Today's election has solved nothing, as we will see in the coming months. And George Bush is satisfied?

Deploying weaponry of mass destruction in civilian areas amounts to a crime against the Geneva Convention and constitutes a war crime. The United States of America did exactly this, using cluster bombs in residential areas, deploying Depleted Uranium and phosphorous against civilian targets. Civilian infrastructures were purposefully targeted so that rebuilding contracts could be handed out to the Bush cronies – without tender in many cases.

George Bush is responsible for an act of mass murder and he is a war criminal. And he can look himself in the mirror and say he is satisfied?

George Bush is also a hypocrite. When the Soviet Union invaded Afghanistan with good reason in 1979, because its democratic and progressive government was being assailed by Mujaheddin Islamist fanatics, led by Osama bin Laden and supported by the USA, the USA complained. The Soviet Union stated at the time that the invasion was to make Afghanistan a better place (and it was – look what replaced Dr. Najibullah – the Taleban).

How George Bush can make negative references to the Soviet invasion of Afghanistan and claim he has done the right thing in Iraq defies logic.

In short, George Bush doubtless believes he did the right thing and without believes he was doing good. But this is not the law of the jungle, we are not in some backward far west cattle town. The world is ruled by a state of law, whether George Bush likes it or not and laws are made to be respected.

In breaking international law, in committing an act of mass murder, in destabilizing a country totally and compromising its future, in being responsible ultimately for acts of torture and for breaking the UN Charter and Geneva Convention, George Bush should not be so satisfied today because tomorrow, he will pay for his crimes, if not in this world then in the next.