What is it with the US Secretaries of State?

The Bush regime has certainly had its problems with its Secretaries of State. The first one, Colin Powell, lied through his teeth at the United Nations Security Council and this one, Condoleezza Rice, has an acute case of chronic insolence where Russia is concerned.

Every so often, Condoleezza Rice has an attack of fury, which seems more like a temper tantrum from some spoilt six-year-old brat in need of a good hiding. Yet again she makes some manic and unfounded statements about Russia and democracy – the old cassette we hear from time to time, which these days makes everyone shrug their shoulders, shake their heads and say “there she goes again, poor woman.” 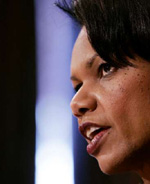 Maybe Condoleezza Rice would like to answer these questions before she vents her spleen the next time. We include the answers in brackets should she wish to consult, for we know her grasp of international affairs is almost as weak as her boss's.

Were the last two electoral processes in Russia transparent? (Yes)
Could one say the same about the two elections of Bush and his regime? (No)

Did Russia invade Iraq illegally? (No).
Did the United States of America invade Iraq, a sovereign nation, without a casus belli? (Yes).

Did the USA decide to follow its obligations under the UN Charter? (No)
Did Russia insist on using the norms of international law for crisis management? (Yes)

Has the Bush regime been responsible for an act of wanton slaughter in Iraq? (Yes)
Has Russia been involved in this horrific and criminal act of butchery? (No)

Did the USA claim that Iraq had WMD? (Yes)
Did Iraq have WMD? (No)
Did the US authorities claim they knew where the WMD was? (Yes)
Did they in fact know what they were talking about? (No)

Has the USA systematically lied in questions related with its foreign policy? (Yes)
Has Russia been persistent and coherent in presenting a balanced version of the truth, referring all decisions on crisis management to the UNO? (Yes)

Did the USA practice debate, dialogue, discussion and democracy in its crisis management during the period of the Bush regime? (No)
Has Russia been the one to press for these democratic principles in international relations? (Yes)

Did the US authorities practise torture on a systematic scale during the Bush regime? (Yes)
Has Russia practised torture? (No)

Is there a death penalty in the USA? (Yes)
And in Russia? (No)

Has the USA been guilty of kidnapping and holding prople for four years without trial or even charges being brought? (Yes)
Did the USA release British prisoners from Guantanamo arbitrarily because Tony Blair had a quiet word with Bush? (Yes)
Does Russia kidnap people or hold prisoners in concentration camps? (No)

Should Condoleezza Rice therefore  mind what she says next time around? Yes, because nobody asked for her self-opinionated, insolent and arrogant points of view, nobody cares anyway and every time this ludicrous figutre opens her mouth, she crosses the line dividing the sublime from the ridiculous.

Now for some more questions for Condoleezza Rice to answer:

Does Condoleezza Rice think it is OK for US soldiers to urinate on prisoners?
Does she think it is “democratic” to sodomise them?
What does she think of Lynndie England's “playing around” at the Abu ghraib concentration camp?
Does she think it is a good idea to defecate in prisoners’ food?
How about wiring up their testicles with electrodes?
And depriving them of sleep?
And subjecting people to mental, physical, religious and sexual abuse?

Has Russia done any of these things?
And the gool ol' US of A?