Condoleezza Rice: Mind your own business

Insolence from US Secretary of State

Sitting comfortably in the Ukraine with her new friend Viktor Yushchenko, making ominous references to this country “ultimately” belonging to “Euro-Atlantic structures” (NATO?) Condoleezza Rice today gave yet another demonstration of her arrogance, insolence and interfering in the internal affairs of the Russian Federation, expressing her “concern” at the first reading of a law controlling NGOs operating in Russia more closely. 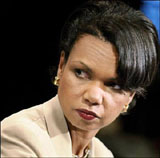 Let us suggest to Ms. Rice that she express her “concern” at the activities of these NGOs, some of them subversive, aiding and abetting terrorist and divisive elements whose only purpose is to destabilise and destroy the State. Let us suggest that Ms. Rice express her “concern” at the criminal and murderous policies of Islamist extremists who work against the interests of her country and against those of Moscow.

How “concerned” is Ms. Rice at the fact that Vladimir Putin's Russia insisted on managing the Iraqi crisis through the proper forum for debate, the UNSC, and how “concerned” is she at the barefaced lies told by her predecessor, Colin Powell, at precisely this organism, regarding Iraq's WMD?