Russia to end military cooperation with Ukraine if it joins NATO

The Vice Premier and the Defense Minister of Russia Sergei Ivanov had an official meeting with his Ukrainian colleague Anatoly Gritsenko yesterday. Observers predicted that the talks between the two top officials would be rather complicated for the ministers intended to pay first priority to the problems of the Russian Black Sea Navy in Ukraine and to defense cooperation between the two countries. 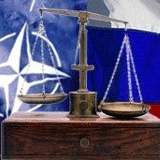 The questions connected with Russia's military presence in Ukraine were solved very quickly during the meeting. However, Russia's views on the strategic cooperation with Ukraine were put forward in the form of an ultimatum.

It is an open secret that the Ukrainian administration has repeatedly expressed its concerns regarding the presence of the Russian Black Sea Navy on its territory (Russia's military presence in Ukraine was automatically established after the break-up of the Soviet Union). Ukrainian Minister for Foreign Affairs, Boris Tarasyuk has recently stated: “This is absolutely abnormal that Russia illegally holds 148 hectares of land in Ukraine's Sevastopol.” According to Tarasyuk, Russia uses real estate facilities on the above-mentioned land inappropriately: “They derive commercial profit from the objects, which were supposed to be used with a different purpose, in the interests of the Black Sea Navy,” the Ukrainian Minister for Foreign Affairs said.

On the whole, the question of Russia's military presence in Ukraine's Crimea has turned into a political tool, which Kiev uses to put pressure on Moscow when needed. The problem became much more important, though, when Ukraine announced its intention to join NATO as soon as possible. Russia's naval base became quite an obstacle for Ukraine to accomplish this goal, although Ukrainian President Viktor Yushchenko stated before that Russia's military presence in Ukraine would not put obstacles on the nation's way to the European Union and NATO.

In April NATO members offered Ukraine to start an active dialogue regarding its membership in the alliance: this is actually the first step that a candidate country takes to prepare for its membership. Yushchenko has officially retrieved records in Ukraine's military doctrine pertaining to its intention to join NATO and the EU (the adequate paragraphs were excluded from the document in 2004, during Leonid Kuchma's presidency).

Russia's Defense Minister Ivanov said yesterday that all questions connected with inappropriate usage of real estate objects on the naval base in Sevaspotol would be settled before March 1, 2006. The ministeradded that Russia was not going to revise the price for the Black Sea Navy to stay in Ukraine. “The price of the rent for the Black Sea Navy to stay on the territory of Ukraine was agreed in 1997 for a long-term period,” Ivanov said.

Russia's Black Sea Navy was stationed in Ukraine's Sevastopol on the base of a special agreement between Russia and Ukraine (signed in 1997). The document expires in 2017. The perspective of NATO bases in Ukraine casts doubts on further existence of the Russian naval base in Ukraine and interferes in the military cooperation between the two countries.

Some experts believe that Russia's defense production will be considerably reduced without Ukraine's participation in it. Others say, though, that Russia would do well without Ukraine at this point. “Russia is self-sufficient on the majority of defense technologies. It can do without other countries' support,” a member of the State Duma Committee for Defense, Major General Nikolai Bezborodov said. The former commander of the Russian Air Force, Anatoly Kornukov, is certain that the Russian defense complex would be able to handle the entire range of defense products for the needs of the Russian Armed Forces in the event Russia cuts its military ties with Ukraine.

Russian Defense Minister Ivanov told his Ukrainian counterpart during yesterday's official meeting that Russia was not dependant on Ukraine in terms of military and technical cooperation. This subject was touched upon during the discussion of oil and gas prices, which is also another reason for Ukraine and Russia to argue. Russia is not going to trade its gas for Ukrainian arms, Ivanov said. “The time of exchange deals is in the past. As for ready-made weapons, Russia has not been purchasing them from Ukraine since the past century,” the minister said. Ivanov added that there were business links between Russia and Ukraine in terms of spare parts production for certain kinds of weapons.

As for Ukraine's intention to join NATO, the military and technical cooperation between Russia and Ukraine is likely to be stopped in this case, Sergei Ivanov said. The Russian administration believes that it is a sovereign right of each and every country to join a particular international organization or a bloc. “However, it is up to another country to choose a partner in the defense field,” Ivanov said. The minister also said that the cessation of military cooperation would not be the worst aspect of Ukraine's membership in NATO. “Other consequences may follow as well, but they are outside my authority,” the Russian minister stated.