The subject of the forthcoming presidential election of 2008 still remains one of the most talked-about political issues in Russia. Some say that Putin may select his successor or find another way to preserve his current political direction. Below you can find a few options for Vladimir Putin to rule Russia even if he has to move out from the Kremlin. 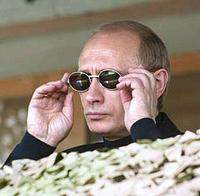 The creation of the Unified state between Russia and Belarus used to be considered an escape clause for Boris Yeltsin after the year 2000. Vladimir Putin may use this opportunity too. To have the new union ready by 2008, one should start working on it already now: Russia and Belarus will have to bring their economic and legal systems together, conduct a national referendum, elect the new parliament and the head of new state (most likely Putin). This scenario has one big flaw: Alexander Lukashenko, the President of Belarus, does not seem to be willing to unite with anyone.

In this case Russian authorities will have to re-organize themselves following Germany's experience. The president will take a nominal position in the country, while the prime minister (Vladimir Putin) will be ruling the country. This will be a very complicated reform, which will require a lot of political changes and the time period of about one year at least. More importantly, Putin has repeatedly expressed his protests against any changes in the Russian Constitution.

Option No.3: A “technical president”

There are other variants for Vladimir Putin to stay at power, which require no constitutional changes. Putin may choose a reliable successor – a person who will work as the Russian president only technically. This person will be the formal leader of Russia, while Putin could take the prime minister's office, chair the State Council, etc.

However, does Putin really need to carry the burden of the Russian leader for years? The president stated in one of his interviews that working as a president even for seven years could “drive a person crazy.” One should leave the Kremlin with honours, of course, but why not becoming a part of history as the president, who raised Russia from economic ruins?

Option No.4: The head of the ruling party

That could be a very good chance for Putin to keep his presence in Russia's political life. United Russia, the pro-Kremlin political party, obviously needs a leader like Vladimir Putin. If Putin becomes United Russia's leader by 2008, he would be able to control both home and foreign policies.

Option No.5: The head of a major corporation

When Vladimir Putin leaves Kremlin in 2008, he could become the president of Russia's largest oil and gas corporation (for instance, Gazprom). If Putin could simultaneously chair United Russia and Gazprom by 2008, he would be able to supervise both political and economic policies in Russia.

If Vladimir Putin makes up his mind to leave indeed, the name of the would-be master of the Kremlin should appear like a trump card, similarly to Boris Yeltsin's introduction of Vladimir Putin on the last day of the year 1999.