The United States of Torture

Yet another sickening, shocking insight into the depths of evil to which the Bush regime can sink

Unfortunately it is not the first time that the Bush regime brings shame onto the good people of the United States of America and its Constitution, this bastion of freedom and democracy which is now relegated to a sad and apologetic synonym of the torture chambers of Abu Ghraib, the concentration camp at Guantanamo Bay (what an example for Washington to give to Havana) and now, 175 people found in central Baghdad who resembled the cowering skeletal figures of Treblinka, Dachau or Belsen. 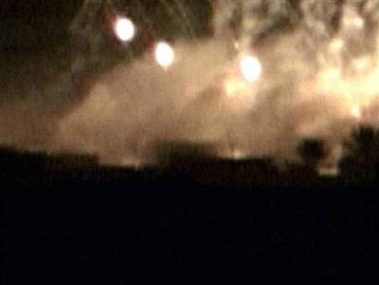 The hype is on, and this time the Bush regime is quick to claim that the raids were made by Iraqi and US troops, uncovering a shocking act of depravity unseen outside Hitler's concentration camps since 1945. What the Bush-Cheney-Rumsfeld cabal failed to state was the fact that the torturers have been trained by Washington, that the CIA has set up torture chambers outside US soil in European prisons and that endemic torture is an integral part of the Bush regime.

What this cabal also failed to do was inform Condoleezza Rice, that as Secretary of State, she may be held legally liable for criminal activities of the US regime abroad. Is she the fall girl?

If not Rice, then at whose foot does the ball stop? The fact that US soldiers burst into underground cellars and rescued 175 Sunni who were being tortured by the paramilitaries which are controlled by the puppet regime set up in Baghdad (constituted by Shiite reactionaries who think nothing of spanking women who misbehave and who wish women to go around wearing the veil, along with some Kurdish Peshmerga) means nothing.

After all, the Constitution drawn up by Paul Bremmer gave the USA the overall control over all of Iraq's security forces, and this includes the paramilitaries. These paramilitary units and death squads were working for the US-appointed Iraqi government. Washington cannot worm out of it by saying that the government was elected by the people: it was appointed by the Americans and presented to the people (many of whom still have not a clue as to who or what they are voting for).

However, the buck does not stop here. Yesterday, 16th November, 2005, we had the final piece of the jigsaw puzzle which in any state of law around the world would see the government being hounded out of office in disgrace. The US authorities ordered a special elite Iraqi unit, the 2000-strong Wolf Brigade, to be trained and thrown into action. What they learnt from the likes of the great American heroine Lynndie England, they put into practice against their fellow countrymen. But what marvelous teachers the US forces are! It is like opening every prison and psychiatric hospital in the neighbourhood, arming them with guns and telling them to party.

The pervasive influence of the Bush regime spreads like a disease. This self-righteous blasphemous regime, whose President claims to be close to God, is nothing more than an evil greedy, elitist cabal of torturers and mass murderers. What a disgrace, what a shame for the good people of the United States of America, what a disgrace, what a shame for the honest people who voted this regime back into power, having been manipulated and cajoled through a control of mass hysteria by an evil and calculating, cold-blooded cabal who have squandered over two hundred thousand million dollars of their workers' hard-earned cash on an illegal act of butchery which has culminated in acts of mass torture far worse than anything committed under Saddam Hussein. This is the legacy of Bush and in any state of law, in any decent, self-respecting country in any corner of the world; the government would be forced to resign because it has brought shame on its people, its nation and its laws and customs.