The soup which created International Labor Day has the hallmarks of two important chefs - the USSR and the USA - which together, along with others, launched this day comemmorating workers' rights, the end of exploitation in ther workplace and the precepts for a balanced and just society. To what extent is this true today? 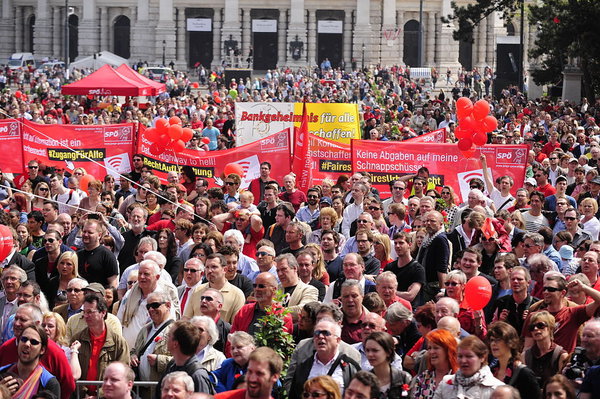 Let us celebrate International Labor Day, remembering all the fallen heroes who gave their lives and gave up their livelihoods, fighting for the rights we enjoy today. Let us remember the exploited, the enslaved, still today and let us show solidarity with the unemployed, the victims of the social terrorist model practiced nowadays.

I say "social terrorist model" because any economic system which does not provide a mechanism from education into the work marketplace, any social model which does not guarantee work and income for its citizens is deficient, and is in fact a form of social terrorism, perpetuating a model which is endemically flawed and creating vectors of exclusion and marginalization. I would remind readers of the social and economic model in practice in the Soviet Union.

The Soviet Union provided free and excellent maternal care, free and excellent basic, middle and secondary education, free and excellent higher education, illiteracy rates of near to zero, then a guaranteed job = zero unemployment, a free home = free housing, free electricity, free gas, free water, fixed rate telephone charge, subsidized or free transportation, free and proficient healthcare, including dental care, free basic necessities, even free vodka. In many cases a car was provided, gasoline was free. Social mobility was guaranteed, you could walk anywhere any time of day or night, you had leisure time activities and even training in music, ballet, sports, acrobatics, you name it, provided for free, there were youth movements, the Pioneers, Komsomol and so on, there was placement to work abroad if you applied, there was security on the streets, you did not find them crawling with drug addicts, there was safety of the State, and there was an external aid program amounting to 250 billion USD per annum to help countries freed from the yoke of Imperialist tyranny.

Today, as we take a look around the world, what do we see? Workers' rights have been swept off the table with the advent of the buzz-word "crisis", which was a manifestation of the collapse of the boom-and-bust whizzy economic system practiced by monetarist capitalists. Job security does not exist, getting a job in the first place is increasingly difficult, a proper timetable is a thing of the past and remuneration does not keep pace with inflation. In short, this system has failed to deliver. It is a failed system of failed policies.

The origins of May Day

We trace a brief outline of the history of International Labor Day from the Pagan fertility festival - Beltane - to the Roman festival Floralia, to the fight for an 8-hour working day in the United States of America at the end of the 19th century - where International Labour Day has its roots, to the internationalization of the movement. Curiously, the USA is one of the few countries which does not have a public holiday on May 1.

The unions/associations formed the Federation of Organized Trades and Labor Unions - FOTLU (November 1881), later the American Labor Federation, which at its National Convention in Chicago in 1884, proclaimed that after 1 May 1886, the working day should be 8 hours. FOTLU announced a series of actions and strikes to apply pressure on the authorities to force them to implement the new working regime.

Meanwhile the labor movement was brutally repressed by the Pinkerton security agents and the police. When the day arrived, 1st May 1886, around 300,000 workers in 13,000 firms started to strike. Chicago was the epicenter of the labor movement and names such as Louis Lingg, Johann Most, Albert Parsons and August Spies will forever be linked with May 1st. The strikes and the revolutionary atmosphere created by the various factions linked to the labor movement continued during May 2 and 3, but always in a climate of peace. However, everything would change the following day.

Due to the increasing brutality by the authorities against the peaceful labor movement, the workers decided to organize a public conference in Haymarket Square, Chicago, on May 4th. The main speaker, August Spies, addressed the crowd of workers and their families, including many children. Eye witnesses, which included the Mayor of Chicago, declared that his speech did not incite violence.

The day was never adopted as a public holiday in the USA but the workers' movement and its claims echoed far and wide, reaching the four corners of the world, where May 1st started to become the focal point for demonstrations in favor of workers' rights. International Socialist proclaimed the date International Labor Day in 1889.

In Europe, 400 delegates attended the International Workers' Conference in 1889, in which the main demand was the eight-hour day and 1st May 1890 was declared an international day of stoppage around the world.  In 1890, May Day demonstrations were generalized and worldwide, from the USA and Canada, to Brazil, Cuba, Peru, Chile, and across Europe from Ireland to Russia, where later the USSR was to institutionalize the day as one of national holiday and celebration of the workers' cause around the world.

May Day is an international day celebrating international values. It is not based on nationality, race, color or creed, it is based on common aspirations of Humankind. Perhaps this year we can all concentrate more on brotherly relations and development of resources over deployment of troops and an obsession with bombing people?