It is difficult to judge who is the worst Secretary of State in the United States of America in recent years. John Kerry must however go into the annals of history as the most idiotic, the most snide, the most arrogant, the most insolent, the most intrusive, the most inconsequential and the best bedpal the Islamic terrorists ever had. Today he asked the Syrian President to show some grace to the terrorist filth he has defeated.Let's show some grace, Abu Ghraib or Guantanamo style! 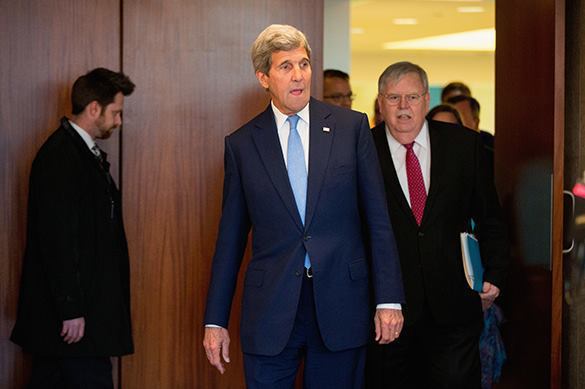 Show some grace to the "rebels" fleeing Aleppo he said, directing his unwanted and unwelcome comments to Russia and the legitimate, elected Syrian government, supported by around seventy per cent of the population. Show some grace. That has to take the biscuit as the most idiotic comment of the century.

Show some grace, to terrorists. What exactly does Kerry mean by that? He means let them get out scot free so that they can regroup and either try and enter Aleppo again or else join up with their friends creating a second front in Idlib or down at Palmyra again. I wonder what the satellite communications eavesdroppers will glean out of that, I wonder what version of the  English accent we will hear when we listen to the orders being given to the ISIS hordes trying to put pressure on the Syrian government by launching a ferocious attack in the south.

Does the USA "show grace"?

The hell they did, Hillary Clinton, another failed Secretary of State, had the audacity to go to Tripoli and giggle at his death. Well, she isn't giggling now, is she?

Did they "show grace" at the torture and concentration camp at Guantanamo Bay? Did they "show grace" at Abu Ghraib, where soldiers were tortured and sodomized by filth sent from the dregs of US society, where soldiers who had been fighting terrorists were deprived of sleep, had their food urinated in, Moslems were forced to eat pork, were attacked by dogs and by that sh*t faced AmeriKKKan heroine, Lynddie England, "jes' havin' fun"? Did they show any grace?

So what John Kerry is saying is basically the following: "Oh Sh*t, we screwed up again guys, we backed the wrong side again and we lost. We tried to impose our form of democracy from 35,000 feet and we trampled on an entire nation without respecting its values and its culture, we ignored its five thousand years of history despite the fact that our country was based upon the extermination of the people who lived there and is a little over two hundred years old. We backed terrorists because we wanted Assad to go, we called his government illegal and anti-democratic despite the fact that it was elected by the majority of the people, and we lost. Russia has once again trounced us because Russia once again is following international law, Russia is fighting against terrorists while we are supporting them. Again. So we are trying to see what we can do elsewhere in Syria to destabilize the Government, even if that means cavorting with ISIS. We know that in just over a year Russia has done more damage to ISIS than we and our European, sorry "f*ck the European Union", words of my colleague in Government, did in several years."

A fitting epitaph to John Kerry and his failure as US Secretary of State. This man, and Hillary Clinton before him, have done more damage to the image of his country than any other American in history, except perhaps George W. Bush, Condoleezza Rice and Barack Obama.

I am sorry, but rather than "show some grace" to these terrorists, so that they can regroup in Idlib and elsewhere, and continue their murderous policies, I believe the way forward is to exterminate the bastards to the last man, if indeed "man" is the right term. Enough of cavorting with murderous filth, rapists, arsonists, thieves, torturers. Showing "grace" to excrement like this is an insult to the police and security forces everywhere, not just in Syria.

Let us imagine what John Kerry would say if thousands of armed thugs started massacring the police and military in the United States of America, raping women, sodomizing boys and slaughtering little girls. Would he appear on television and say "show some grace"?

Probably, he would. Give me a cell and I would like to "show some grace" to John Kerry and his regime chief, Obama.