The questions Hillary Clinton did not answer

Two years ago, the office of Senator Hillary Clinton was contacted with a polite message requesting an interview. A standard anonymous answer followed. Despite repeated contacts during the election campaign, not even a message of recognition was received, contrary to all the other political parties in the USA, including the office of Vice President Richard (Dick) Cheney. Here are the questions that Hillary Clinton did not answer: 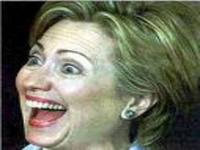 The questions Hillary Clinton did not answer

1. Senator Clinton, is it true that you insinuated President Putin does not have a soul?

2. You have said you wish to reform the US healthcare system. Could you please tell us how you plan to do this?

3. Why should you succeed where others have failed?

4. How would you comment on your statement that being a Republican and a Christian are difficult to conciliate?

5. Is it true that you have the support of the Jewish Lobby? If so, how will this influence your foreign policy? Will it continue to be controlled by Israel?

6. What is your message to the average American voter? How would you propose to make his/her life better?

7. What are your plans for Iran? Do you stand for a war?

8. How would you improve America's standing in the international community?

9. Why did you support the war against Iraq?

10. What are the reasons for your having fallen for the lies which were launched against Saddam Hussein?

11. Why does your Candidate website not have an email for the Press, whereas that of Senator Obama has? Would you agree this is a comment on the professionalism or the arrogance of your campaign?

12. Did you hope to gain an advantage over your opponent by announcing your trip to Florida and your support for the seating of Florida delegates just prior to the Florida primary?

The absense of an answer, on a systematic basis, can mean one or all of a number of things: Senator Clinton cannot answer these questions, does not want to answer these questions because she cannot find a credible enough reply, could not care less about the international press (in which case, what a fine candidate for a US President at a time when the USA needs to build bridges) or worse still, never received the messages in the first place, which would indicate a tremendous and shocking degree of lack of professionalism. If she cannot handle a website, how can she be expected to govern a nation of 300 million people?

Indeed, for some reason Barack Obama’s website has a contact for the Press, whereas Senator Clinton’s has none.