Hillary Clinton is an interesting case study. She started four years ago as a charming Secretary of State, the smile on the snout to wipe out the snarl of her predecessor, Condoleezza Rice and four years on, she appears on camera butch, a trucker-type probably complete with tattoos, insolent, inconsequential and incompetent. We now understand Bill. 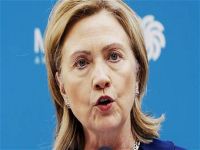 What happened to Hillary Clinton?

Her credentials for the position of Secretary of State were never that great; let us be honest: someone who lied on camera for all to see about getting off an aircraft in the middle of a war zone in Bosnia in the 1990s when in fact she arrived to a red-carpet welcome, complete with band playing... Since when is a red carpet and a band a war zone?

And now, the Chief of Diplomacy of the United States of America imitates her representative at the UNO, Susan Rice, in insolence, calling Russia and China "despicable" for spoiling her war plans in Syria (and beyond).

Insolence is indeed the mainstay and the keyword behind US diplomacy, intrusion ditto and hypocrisy has to be the toothpick in the throat of those who try to expound Washington's virtue on the world stage. And let us be perfectly frank. Hillary Rodham Clinton had a very easy passage before her as the outwardly visible sidekick of Barack Obama, elected after eight years of a Bush regime which confirmed all the worst nightmares of the conspiracy theorists. Did she pull it off? No she didn't.

For someone in her position, to label the Russian Federation and the People's Republic of China as "despicable" because they exercised their right to block NATO's evil desire to make another Libya out of Syria, is a clear sign of how low US diplomacy has sunk. In fact, it is difficult to discern which of the last three Secretaries of State is worse: Colin Powell, with his lies at the UNO about Iraqi Weapons of Mass Destruction; Condoleezza Rice, with her justification of Georgia's murderous attack against Russians and now Hillary War Zone Clinton, responsible for Libya and desperate to press further eastwards as she holds the hands of those whose human rights records are...in a word...despicable.

Despicable are those Gulf Royals, unelected, but in power, and accepted without a word of contestation by Clinton and Obama and company, some of whom allegedly go to Morocco and perform the most horrific sexual crimes with boys and girls...despicable are the leaders of the Gulf States favourable to the USA and its allies siphoning off their resources, which have carried out the most draconian measures against their citizens.

Despicable is the United States of America and its policy of torture flights, on which CIA operationals carried out barbaric acts against detainees; despicable it is to flout international law, invade sovereign states and destroy their civilian infrastructures with military hardware.

Despicable is Guantanamo Bay concentration camp, where the worst human rights violations in Latin America are perpetrated by the United States of America; despicable was Abu Ghraib concentration camp in Iraq, where the great American heroine Lynndie England was let loose on people who had been imprisoned without charge but hey! "just havin' fun". Despicable it is to detain people without due process, without access to a lawyer, without access to family visits and without even an accusation.

Despicable it is to arm terrorists overseas, as was the case in Libya and as is the case in Syria. Despicable, then, if we analyse with a modicum of intelligence, is Hillary R. Clinton and the hellhole that she represents.

To prove my point, in how many of the human rights violations mentioned above were Russia and China involved?

Thank you. I rest my case. Hillary War Zone Liar Clinton: YOU are despicable.