Syria: The pig-headed arrogance of the FUKUS Axis

FUKUS (France-UK-US), the neo-imperialist Axis, showed its true mettle in Libya where it strafed the water supply network to deprive civilians of water then bombed the electricity grid "to break their backs". War crimes? Certainly. And here they are again blaming Russia because their moderate terrorists are getting whipped in Syria. 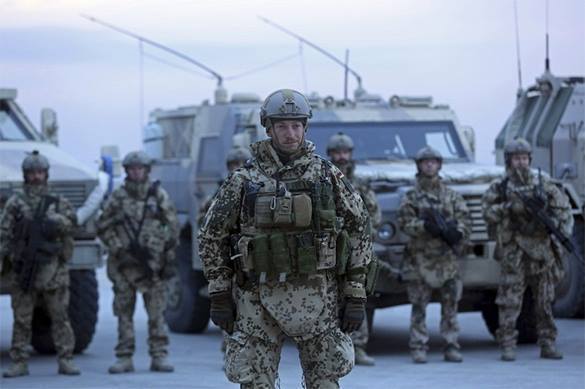 The sheer, shitfaced insolence of representatives of the United States of America during the Obama Presidency has been well documented in this column, the latest example being provided by one Samantha Power whose country/allies then went on to bomb dozens of troops in the Syrian Arab Army fighting against Islamist terrorists who have been unleashed in Syria by western bedboys Qatar and Saudi Arabia. Enter center stage Poodle in Chief, the United Kingdom, whose po-faced representative at the United Nations accused Russia of war crimes.

By war crimes, one supposes he meant "fighting terrorists" who have been slicing the breasts off women in the street, shooting women for wearing red jackets, raping girls before they were beheaded, raping girls after they were beheaded, impaling little boys on stakes, forcing children to watch their parents being tortured, sodomizing little boys, sodomizing teenage boys, sodomizing University students, pillaging, stealing, looting, burning property... and what did the illustrious FUKUS Axis say about that? Does the British representative at the UNO sit back and giggle as he views these scenes on his laptop?

I will tell you what France, the UK and the US said. They said absolutely nothing, in public at least. Sure, there were mutterings in Paris and London about "something has to be done about these Israelis" but nobody dares speak out in public because Washington is controlled by the Jewish Lobby and Washington pulls the strings of Poodle in Chief and the Great Pretender to Poodle in Chief, France...which just does not have the je ne sais quoi to edge out its old foe across the Channel as chief cock...adoodledoo.

It is amazing that countries with populations numbering the tens or hundreds of millions manage to find these gray, miserable, scowling misfits, spoilsports who look like they are suffering from chronic constipation or Crohn's Disease, to represent their countries by being insulting, arrogant, insolent and hypocritical.

The utter hypocrisy is risible

Remember when the FUKUS Axis invaded Libya without any legal pretext? Remember when aircraft from the FUKUS Axis, including apparently the RAF, spent one hour this month using 4 aircraft in a persistent attack against the Syrian Arab Army and only stopped because Russia told them to? Did the UK classify this as a war crime? What did the UK say when the USA precision-murdered patients in a hospital in Afghanistan?

The FUKUS Axis entered the Libyan war carrying out military action without the convening of the UNSC Military Council, under Resolutions 1970 and 1973 (2011). Under the UN Charter, Chapter VII, Article 46: "Plans for the application of armed force shall be made by the Security Council with the assistance of the Military Staff Committee". Such committee was never convened.What did the FUKUS Axis have to say to this infraction? Nothing.

What did the FUKUS Axis have to say when the same countries breached UNSC Resolution 2132 (XX) of December 21, 1965, on intervention in domestic affairs of a sovereign state in Iraq? In Libya? In Syria?

Did the UK and USA complain of war crimes when they broke Article 3 of the Statute of The Hague International Penal Court which states clearly that one criterion for indictment for war crimes is: "Attack or bombardment, by whatever means, against undefended cities, towns, villages, buildings or houses" or "Massive destruction of cities, towns or villages or destruction not justified by military necessity" applied to Iraq and Libya?

Under the British Home Office's own list of proscribed terrorist group is LIFG, which the British government sided with in Libya. Isn't that contradictory? Or does the United Kingdom now openly side with terrorists? What was it the Home Office said about this group? H yes I remember: "The LIFG seeks to replace the current Libyan regime with a hard-line Islamic state. The group is also part of the wider global Islamist extremist movement, as inspired by Al Qa'ida. The group has mounted several operations inside Libya, including a 1996 attempt to assassinate Mu'ammar Qadhafi". So the UK sided with them.

What did the UK say about its own breach of the Resolutions it used to enter the Libyan conflict and render the country with the highest Human Development Index to the status of a failed state crawling with terrorists? See, UNSC Resolution 1973 (2011), in its Chapter on Protection of Civilians, in paragraph 4. states:

It would also be interesting to hear what the representatives of the USA, France and UK have to say about this short list of sample crimes they committed in Libya:

And so, Russia is conducting a successful counter-terrorist operation in Syria. The Syrian war exists only because the west is supporting terrorist groups fighting against the legitimate President of Syria under international law. The west is becoming hysterical because Russian strategy, operations and diplomacy are thwarting their evil schemes at each and every turn.

The war criminals are the UK, USA and France, the barbarism is and has been practiced by those guilty of the world's only twin atomic terrorist strike and their allies.

Topics syria
21:20
Viktor Yanukovych: Ukraine on the verge of total annihilation
21:05
Video shows how Ukrainian military men are treated at detention facility
20:50
Horoscope for May 28, 2022: Too many surprises for everyone
19:20
Nuclear war scenario may materialise should Washington supply MLRS to Ukraine
18:49
Bloomberg: Germany's actions against Russia put Austria at risk
18:21
American laboratories found in Nigeria where monkeypox began to spread
17:34
Truss says what'll happen to the West if Russia wins the Ukrainian conflict
16:47
Newsweek explains why Russia is preparing Kalibr missiles after US statements
16:23
Expert says Zelensky might face a military coup in the coming weeks
15:57
Video: Foreign mercenaries fire grenade launcher at Russian BTR in Ukraine
World
Russian tank blown up by a mine turns out to be a bait for Ukraine in Donbass