"The President does not have power under the Constitution to unilaterally 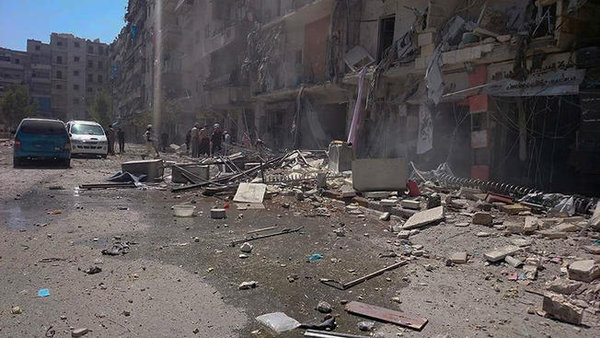 actual or imminent threat to the nation."

As the US heaps blame and accusations on Russia and Syria for the alleged air strike on the aid convoy on Monday 19th September, as ever there are more questions than answers - and whatever US spokespersons state, absolutely no certainties.

The only undeniable fact is that another tragedy killed at least twenty Syrian Arab Red Crescent volunteers and the organisation's local Director Omar Barakat, father of nine. At least eighteen of the thirty one-truck convoy were destroyed with the warehouse where humanitarian aid was stored.

No evidence of ordnance strike

The Russian Defence Ministry has categorically denied any attack and claims the convoy caught fire:

"We have studied video footage from the scene from so-called 'activists' in detail and did not find any evidence that the convoy had been struck by ordnance", commented Igor Konashenkov, a Ministry spokesman.

"There are no craters and the exterior of the vehicles do not have the kind of damage consistent with blasts caused by bombs dropped from the air." His observations are hard to challenge, anyone who has studied the assaults of the "international community" on far away countries over the last decades knows what a bombed truck looks like - what fragments remains of it.

Konashenkov said that damage visible in footage was instead the result of cargo igniting - "oddly" occurring at the same time as militants (formerly Nusra Front) had started a big offensive in nearby Aleppo, backed by tanks, artillery and other heavy equipment.

He added: "Only representatives of the 'White Helmets' organization close to the Nusra Front who, as always, found themselves at the right time in the right place by chance with their video cameras can answer who did this and why."

Indeed the 'White Helmets' boasted in a video of being on the scene within "moments."

The "White Helmets" who have had the gall to entitle themselves the Syrian Civil Defence Force are seemingly neither Syrian, nor Civil, nor Defence. Vanessa Beeley who has meticulously charted their antics points out "This is an alleged 'non-governmental' organization ... that so far has received funding from at least three major NATO governments, including $23 million from the US Government and $29 million (£19.7 million) from the UK Government, $4.5 million (€4 million) from the Dutch Government. In addition, it receives material assistance and training funded and run by a variety of other EU Nations."

She informs of such concerns regarding the organization that: "A request has been put into the EU Secretary General to provide all correspondence relating to the funding and training of the White Helmets. By law this information must be made transparent and available to the public."

Beeley points out: "There has been a concerted campaign by a range of investigative journalists to expose the true roots of ... the White Helmets. The most damning statement, however (comes from) their funders and backers in the US State Department who attempted to explain the US deportation of the prominent White Helmet leader, Raed Saleh, from Dulles airport on the 18th April 2016.

"And any individual - again, I'm broadening my language here for specific reasons, but any individual in any group suspected of ties or relations with extremist groups or that we had believed to be a security threat to the United States, we would act accordingly. But that does not, by extension, mean we condemn or would cut off ties to the group for which that individual works for." Figure that one, Dear Reader.

The Ron Paul Institute has pointed out: "We have demonstrated that the White Helmets are an integral part of the propaganda vanguard that ensures obscurantism of fact and propagation of Human Rights fiction that elicits the well-intentioned and self righteous response from a very cleverly duped public. A priority for these NGOs is to keep pushing the No Fly Zone scenario which has already been seen to have disastrous implications for innocent civilians in Libya, for example."

What better chance to push "the No Fly Zone scenario" than arriving within "moments" of the convoy tragedy, filming it and creating a propaganda scenario before any meaningful forensic investigation could even be started, since the trucks were still burning. And of course, the "White Helmets", aka "Syrian Defence Force", were filming rather than attempting to put out the fire and rescue those in the burning trucks.

However: "The footage emerged as the United Nations rowed back from describing the attack on the aid convoy as air strikes, saying it did not have conclusive evidence about what had happened."

It must be asked, why on earth, after long and protracted negotiations over the convoy would Syria and or their Russian ally risk the wrath of US and "coalition" further decimation of the country by laying themselves open to accusations of bombing and aid convoys?

The tragedy has emphatically achieved one thing, however. Wiped from the headlines is another atrocity - the US bombing which killed over sixty Syrian soldiers and wounded over a hundred others just two days earlier, on Saturday 17th September, causing Russian Foreign Ministry spokeswoman Maria Zakharova to comment: "We are reaching a really terrifying conclusion for the whole world: That the White House is defending Islamic State. Now there can be no doubts about that", according to the RIA Novosti news agency.

Again - Quis custodiet ipsos custodes? Who will guard the guards?

Author`s name Felicity Arbuthnot
*
Topics syria
18:54
Ukrainian soldier uses chainsaw and fire to release US howitzer from ice trap
18:30
Onet: Ukraine will lose in six months due to shell shortage
17:36
Russian troops defeat Ukrainian troops in Zaporizhzhia region
14:50
Number of foreign mercenaries in Ukraine continues growing
14:17
Russians buy more than 50 tons of gold in 2022
13:57
Russia will not talk to Ukraine. Russia will talk to the West
13:34
USA's plan to give 20 percent of Ukraine for peace hoax
12:51
Medvedev: Ukraine as a state to be devastated, go bankrupt and be turned into colony
19:57
Russia will use all of its military potential to counter Western arms supplies to Kyiv
18:34
Biden changing strategy on Ukraine to reach diplomatic solution with Russia
The West prepares army to invade Russia