Anthony Charles Lynton Blair currently back in Britain, cast a dark shadow over those campaigning to stay in the European Union in the 23rd June referendum. Inflicting himself on the Britain Stronger in Europe group, he spoke at every opportunity - reminding even the most passionate Europhile of the last time he assured: "I know I'm right" - Iraq. 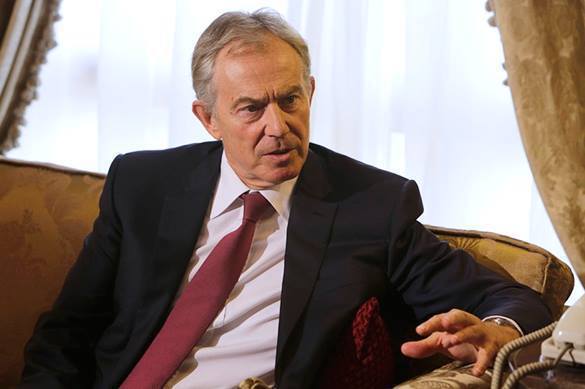 If the "Remainers" had an ounce of sense Blair should have been ditched in a nano-second. He is not "Toxic Tony" for nothing.

However, since the long awaited Chilcot Inquiry in to the Iraq invasion is to be published just thirteen days after the referendum (6th July) it is worth revisiting more of the mistruths of which he is capable.

On 18th March 2003, Blair stood in Parliament and listed the times Saddam Hussein's government had said they had no weapons of mass destruction dismissing them all, including the 11,800 pages or 12,200 pages of accounting of that which they did not possess and delivered by the Iraqi delegation at the UN to the UN UNSCOM offices on 8th December 2002.

Lest it be forgotten...

Lest it be forgotten, the reason for the uncertainty of the length of the volume is that the US delegation simply appropriated it and returned less than 4,000 pages so heavily redacted as to be indecipherable - and without the hefty index at the back listing the Western arms companies who had, prior to the first Gulf war, sold them weapons.

Blair told Parliament loftily: " ... the 8th December declaration is false. That in itself is a material breach. Iraq has made some concessions to co-operation but no-one disputes it is not fully cooperating. Iraq continues to deny it has any WMD, though no serious intelligence service anywhere in the world believes them ... We ... will back it with action if Saddam fails to disarm voluntarily." Iraq of course, was telling the truth. Blair had appointed himself  Judge, jury and executioner.

And here is a real whopper: "I have never put our justification for action as regime change."

And another: "Iraq is a wealthy country that in 1978, the year before Saddam seized power, was richer than Portugal or Malaysia.

"Today it is impoverished, 60% of its population dependent on food aid.

"Thousands of children die needlessly every year from lack of food and medicine."

What he omitted was stated in a piece I wrote back in 1998 addressing the ever repeated propaganda. The conditions were caused directly by the US-UK driven embargo, overseen by Blair's envoy to the UN, Carne Ross, who headed the Sanctions Committee after the August 1991 imposed embargo:

"By 1995 the World Food Program noted that: 'time is running out for the children of Iraq'. Figures - verified by UNICEF - record that 1,211,285 children died of embargo-related causes between August 1990 and August 1997. A silent holocaust in the name of the UN. These numbers are similar to those lost in Pol Pot's genocide in Cambodia. It is three times the population of Kuwait in small lives."

' "After 24 years in the field, starting with Biafra, I didn't think anything could shock me," wrote Dieter Hannusch of the World Food Program in l995. "But this was comparable to the worst scenarios I had ever seen." '

The day after Blair's address to Parliament, Operation Iraqi Liberation began, to which he had committed the country in his visit to George W. Bush's Texas ranch in April 2002, without telling Parliament.

Moreover, in 2009 The Mail on Sunday disclosed that: "Attorney General Lord Goldsmith wrote (a) letter to Mr. Blair in July 2002 - a full eight months before the war - telling him that deposing Saddam Hussein was a blatant breach of international law.

"It was intended to make Mr. Blair call off the invasion, but he ignored it. Instead, a panicking Mr. Blair issued instructions to gag Lord Goldsmith, banned him from attending Cabinet meetings and ordered a cover-up to stop the public finding out.

"He even concealed the bombshell information from his own Cabinet, fearing it would spark an anti-war revolt. The only people he told were a handful of cronies who were sworn to secrecy.

"Lord Goldsmith was so furious at his treatment he threatened to resign - and lost three stone as Mr Blair and his cronies bullied him into backing down."

The then Prime Minister did not alone ignore the Attorney General's legal advice. In November 2002 "six wise men" gave Blair "bloody warnings" as to the outcome of an attack on Iraq.  They were: " ... all academics, expert on Iraq, the Middle East and international affairs. They had been called to the Cabinet Room to outline the worst that could happen if Britain and the United States launched an invasion.

"This was a meeting that could have changed the course of history and, with better planning for the aftermath, saved countless lives - if only the Prime Minister and his advisers had listened and acted on the bloody warnings on that day in November 2002."

Dr. Toby Dodge, then of London's Queen Mary University foresaw with extraordinary clarity the near certain outcome, warning: '... that Iraqis would fight for their country against the invaders rather than just celebrate the fall of their leader. A long and nasty civil war could follow. "My aim that day was to tell them as much as I could, so that there would be no excuses and nobody saying, 'I didn't know.' "

Others who shared their extensive expertise were Professor George Joffe of Cambridge University, Sir Lawrence Freedman, Professor of War Studies at King's College, London and a Blair adviser, Professor Charles Tripp of the School of Oriental and Asian Studies, Steven Simon, Director of the International Institute for Strategic Studies, and Professor Michael Clarke, then of Kings College, London. Before the gathering they were warned: "Don't tell him not to do it. He has already made up his mind", Dr. Dodge told The Independent.

Blair and his Cabinet had: "... no plan for what would happen after the invasion. The approach was, 'The Americans are heading this up. They will have a detailed plan. We need to follow them' ", said Professor Joffe. However in reality, a year's planning by the State Department for the invasion's aftermath: "was junked. They were making up policy on the hoof."

Professor Joffe also explained the complexities of Iraq's power structures with Tony Blair seemingly disinterested in the potential cultural, societal and political minefields, responding with kindergarten simplicity (re Saddam Hussein) " But the man is evil isn't he?"

Steven Simon had little faith in bringing democracy to Iraq at the barrels of guns and deliveries of 30,000-pound bunker busters: "If everything had been done differently, there might have been some small shot at avoiding disaster. But only a small shot."

Incredibly, according to Professor Joffe: "The people who were put in charge in Iraq had very little knowledge or experience of the Middle East."

Professor Clarke commented that Blair's attempt to justify the invasion was mistaken: "We knew there was no nuclear stuff in Iraq." Moreover, he believed: 'Blair did not actually decide to go to war on the basis of intelligence, but made it look as if he had with his two "dodgy" dossiers. "He presented the case to the public as if they had incontrovertible evidence that Saddam had weapons of mass destruction. That was rubbish. They were ridiculous documents, both those documents." ' (Emphasis added.)

Late last year, Blair made what was described as a "qualified apology" for "mistakes" made in Iraq - among them: "our mistake in our understanding of what would happen once you removed the regime". In the light of the above, blatantly untrue.

Blair's dodging and weaving over the years since 2003 - in spite of his millions, numerous properties, jet (seemingly leased) and a yacht, accrued from advising some of the world's most despotic leaders - seems to have worn him down a bit, though.

In an extraordinary television outburst attacking Labour Leader, Jeremy Corbyn who said of Blair on BBC's Newsnight last August: "If he has committed a war crime, yes (he should stand trial.)  Everybody who has committed a war crime should." Blair responded: "I'm accused of being a war criminal for removing Saddam Hussein  ... and yet Jeremy is seen as a progressive icon as we stand by and watch the people of Syria barrel-bombed, beaten and starved into submission and do nothing."

No mention of the US' illegal "coalition" which includes the UK which has made 4,024 strikes to 1st June this year, according to the US Department of Defence. Strikes remarkably inept at affecting the countless foreign terrorist groups, but which have caused devastation to the Syrian people whose plight was caused by US plotting.

46,615 bombs and missiles have been dropped Syria and Iraq in the seeming non-fight against ISIS and other criminal groups. (airwars.org)

Apart from his ongoing economy with the truth, Tony Blair also seems to be well past his sell by date. In Northern Ireland, probably the only place on earth which has a tenuous reason to give him some credit for the "peace process", where he went to speak on the referendum at Ulster University, he was less than welcome.

"I was involved in protests about the Iraqi War which Tony Blair was responsible for, Tony Blair is hated throughout the world and he has blood on his hands over Iraq.

"I will be voting for the U.K. to remain on June 23rd but I think someone like Mr. Blair (urging the stay in vote) will put a lot of other people off.

"Tony Blair is not welcome in our city and the people who organized this visit obviously knew this" - the meeting had not been publicly advertised and the address was to a specially selected audience. The co-speaker was Blair's former Chancellor, Gordon Brown, near equally unpopular, who wrote the cheques for years of UK bombings before the invasion and then for the invasion's destruction. Had the meeting been publicly advertised, assured Mr McMenamin, protesters would have been out in force.

On 17th June, Blair was a signatory to an open letter, signed by two former deputy Prime Ministers and a number of MPs and public figures urging voters to stay in the European Union. It included the words:

" ... public life, whether in politics or elsewhere, should be about something else - something better.

"It should be driven by a desire to bring people together when it would be easier to tear them apart. A wish to build bridges rather than erect walls." To promote that which is "Peaceful, tolerant, compassionate."

As he added his signature, did he reflect on Iraq's destroyed bridges - literally and metaphorically, on a nation of walls erected by US and UK troops over one of the most open landscapes anywhere to be found and on the accompanying destruction of peace, tolerance and compassion at the hands of US and UK policies aided by his ignorant determination and "ridiculous documents."

Philippe Sands QC, Professor of international law and Director of the Centre on International Courts and Tribunals at University College London, has said 'he believes, unequivocally, that the 2003 invasion was illegal under international law. "In the UK, beyond those associated with the government's effort, I cannot think of a single international lawyer who thinks the war was lawful. Not a single name comes to mind. That's got to be telling." '

It can only be hoped the Chilcot Inquiry's findings deliver Charles Anthony Lynton Blair and his cohorts a sharp, chilly return to reality for their part in a tragedy which will be his and George W. Bush's place of infamy in history.

As this is finished, against the odds, the referendum is announced lost, the UK is out of the EU, the financial markets and the pound have plummeted and Prime Minister Cameron has announced his resignation. It will probably never be known to what - if any - extent Blair's reviled presence changed "stay" voters to "leave."