In 1999, Putin promised to find and destroy terrorists even in their toilets. All of those Chechen warlords - from Basayev to Umarov - were indeed destroyed. Russia's recent missile attacks from strategic bombers and a submarine came as a warning sign for the countries that support terrorists. 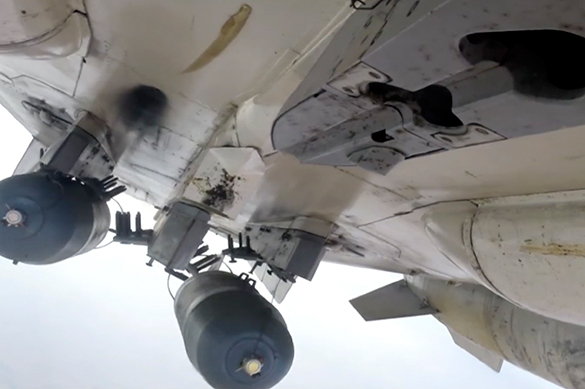 Article 51 of the UN Charter

In the fight against terrorism, Russia will act in accordance with Article 51 of the UN Charter. The article regulates the right to self-defense for a state, Putin stated. Russian Foreign Minister Sergei Lavrov stressed out at a meeting with his Lebanese counterpart that Russia would be implementing the article by all means - military, diplomatic and financial ones.

Article 51 of the UN Charter says that the Charter in no way impairs the inherent right for individual or collective self-defense in case of an armed attack on a UN member, until the UN Security Council takes measures to maintain international peace and security."

Originally, the document spoke about a direct invasion of a foreign army. After 9/11 attacks, the US appealed to the UN Security Council for the use of force against the Taliban movement, which, as US officials believed, masterminded the attacks in New York. The UN Security Council decided that the right to self-defense could be used against non-organized armed groups or those that did not act on behalf of any particular state.

After the terrorist attack in the skies over the Sinai Peninsula, Russia can use Article 51 to either bring perpetrators to justice, or take other measures against them (destroy them).

One of the terrorists, whom Putin promised to destroy was Chechen militant Zelimkhan Yandarbiyev, who organized the invasion of Dagestan in 1999. Yandarbiyev was killed on February 13, 2004 as a result of a special operation of the Chief Intelligence Directorate in Doha, the capital of Qatar. Russia had unsuccessfully requested his delivery from the Qatari authorities for three years.

All traces lead to Qatar

Qatar is one of the organizers of the terrorist act over the Sinai.

"In Qatar and Saudi Arabia, there are those who organize and sponsor terrorist attacks - they are headquartered there. There are well-known people there, who control terrorist activities in Syria and Iraq.

"In my opinion, these people should be very much afraid of Russia, like plague. It is up for the country's administration to decide how to intimidate those people. Bombing is not necessary at all - there are completely different methods of influence," CEO of the Institute for the Middle East, Yevgeny Satanovsky said.

According to Satanovsky, "Russia stepped on the warpath, grabbed a large tomahawk, arrows and went to work. Everything else does not matter." Russia was not coordinating its actions with international organizations to take Berlin in 1945, the expert added.

Russia must go ahead of NATO

The Rostov-on-Don submarine launched "Kalibr" ("Caliber") cruise missiles on the Islamic State from the eastern Mediterranean. The missiles flew on a ballistic trajectory over Turkey. Strategic bombers Tu-160, Tu-95 MS and Tu-22 took part in the operation as well.

If you can not prevent a fight, you should fight first, Putin said once. If Russia does not do it, NATO will take the lead in bringing the war to Russia's borders. According to Foreign Policy, NATO has been working on that (FP: "NATO's Turn to Attack").

In Brussels, EU officials discuss the military operation in Syria on the basis of Article 51 of the UN Charter. The EU has its own experience: the deployment of contingents in Afghanistan and Iraq, the adoption of the US Patriot Act that gave US special services an opportunity to violate any law in case of a terrorist threat. The EU imposed sanctions on the countries that support terrorism and toppled legitimate presidents.

Strangely enough, Saudi Arabia, one of the organizers of September 11 terrorist attack in New York, was left unpunished. Yet, it is the precedent and the scale of action that matters.

Russia can no longer ignore the fact that the conflicts in Syria and Iraq affect its most important interests. Russia can not let terrorists kill Russian citizens. Developing the special operation inside and outside Syria, Russia must emphasize that it is building an "open coalition."

It is worthy of note that the center to coordinate air operations led by the US and the US-led coalition - al-Udeid air base - is located in Qatar. Is it time to raise the issue at the United Nations to organize an international tribunal for the governments of Turkey, Qatar and Saudi Arabia for their involvement in terrorism?