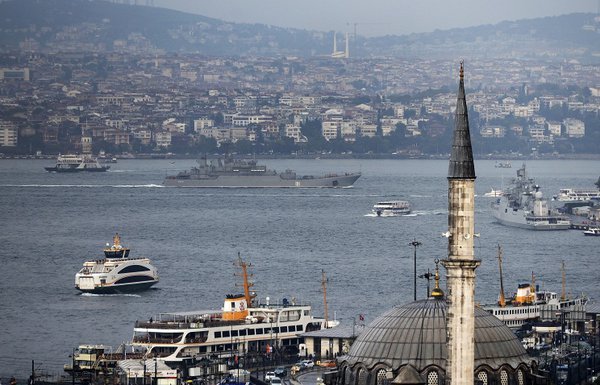 It's been two weeks since the occurrence of the tragic jet incident between Russia and Turkey yet the relations between the two countries do not seem to be settling down anytime soon. When we go back to the first days following it, we can clearly say that from the first statements of the leaders, they were both in favor of resolving the crisis through diplomacy. Russia was expressing the possibility of missile blast-off while Turkey was stating they downed a jet of an unidentified origin. However, these moderate messages were replaced with harsh accounts and several economic sanctions.

In my point of view, it is unbecoming for the two old friends to turn this situation into a growing crisis. Besides, deepening this critical point is of no benefit for both countries; it is not reasonable to make the people of both countries suffer pain that we believe will vanish after a while. Will we have such an issue in five or ten year's time? Probably not. Then why should the two nations who have been friends for years experience such difficulty?

Above all, one crucial matter vis a vis this event I'd like to note is that the Russian jet should not have been downed in the first place. In case the related pilots could not understand the warnings in terms of violation, the warnings should have been continued accordingly.  There is something wrong with this action. The pilots might have misunderstood the warnings, or perhaps the voices might have intermixed or the pilots might have made an airspace violation as a human mistake. Even if the pilots could have understood the warnings, it was not necessary to down the jet. They could have escorted it from the region by pulling away from the border. There are always options other than downing a jet. Air violations are encountered in almost every country but as my personal opinion, it is not necessary to apply it and down a plane even though it is approved by the international law.

For example, last week there was another incident in the Istanbul Straits when Russian sailor was donning shoulder-fired surface-to-air missiles during one of Russia's amphibious ship's transits. Turkish FM and many Turkish journalists and analysts declared this action was against the Montreaux Convention. However, Turkey did not take any action against this issue and moved on. They could have neutralized that sailor holding the missile considering this as a threat to Turkey. But they did not do it, they ignored it instead. They could have done the same in the previous incident. It is crucial to use authorizations in the best way possible. Turkey could have closed the Straits to Russia and declined their transits according to the Montreaux Convention but did not choose to do it. Within the frame of the law, we should search for ways of facilitating the issues. An attack option should be made difficult instead of making it an easy and first choice.

However, it is not possible to go back and change what was done. Even though the action is by no means acceptable in my personal view, what should be done now is to focus on our future to better our relations.

The importance of collaboration

Both Russia and Turkey have a long-standing history and culture and one is inherited from a world Empire, the other from tsarism. It is always better to exchange calm and friendly statements from the leaders of the involved parties. Turkey and Russia are two countries that complement each other in many areas, be it economically or socially. For example, Turkey serves as a bridge for Russia to the West and the Islamic World. Bilateral relations should not be affected negatively when such unwanted events occur because such surprising matters are invariably unwanted but may happen in international relations from time to time. It is not possible to form a permanent relationship if a person blames the other for what has been done in the past. The same applies to our two countries and I believe Russia and Turkey are both powerful enough to overcome this catastrophe like they did historically. For instance, the Ottomans and the Russians fought 13 different wars over the course of three centuries but this did not stop them having political relations during the time of Turkey's War of Independence. The Soviets and Turkey signed a nonaggression treaty, which also developed their cultural ties. Succeeding the establishment of the Turkish Republic and the Union of Soviet Socialist Republics, relations in every sphere from science to sports progressed and gained momentum after validating a new nonaggression and friendship treaty in 1925.

Additionally, Turkey and Russia have been experiencing their golden age for the last 15 fifteen years. The peoples of both nations have formed very friendly bonds. Russians are very warm people with quite beautiful characteristics who love Turkey and Turkish people a great deal. Nearly four million Russian tourists visit Turkey every year and recently, more than 300,000 Russian people have started to inhabit the city of Antalya. Their families and friends have engaged with Turks and have become almost one of us. In the same way, many Turks have moved to Russia and started family there. This crisis at issue is affecting these people directly as well since it is very difficult for them to visit one another due to the latest sanctions. All of our friends are unsettled because of this situation.

What to do to make up the situation

The most urgent thing now is to seek ways to reconcile the two leaders. This unexpected event offended President Putin since he worked very hard to better the relations with Turkey, not only in terms of trade and economics, but also on a personal level. Turkey on the other hand suffers from this to a great extent since the leaders and the Turkish people do not want to lose their valuable friendship with the Russians. Yet after the crisis, the mutual statements bore a language devoid of love and compassion. It is a time where both sides have to act with perseverance to avoid coming to a breaking point; after all, the two nations strove hard for years to reach to such a brotherly level. To make up this situation, President Erdogan and Prime Minister Davutoglu can once again express their sadness and regret as a start. Turkey can also make some remarkable gesture to Russia, which would relieve them to a great extent. Let us show our best efforts to reconcile both parties and normalize relations, as they should be, before it is too late.

Turkey will not leave Russia alone

How Russia and Turkey can change international energy hub