Aníbal Silva, the President of Portugal, leaves little room for doubt after his speech yesterday appointing the incumbent Prime Minister, Pedro Coelho, to form a government after the general election on October 4. He confirmed that NATO is a supra-national organization with unconstitutional powers which interfere directly in the internal affairs of its member states. 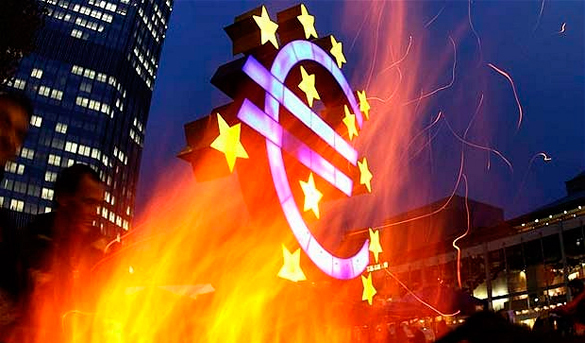 This means that a government formed by PSD-PP can be blocked by a motion of no confidence presented by the opposition, but a new election cannot take place until at least six months after the election of the new President in January 2016. In Portugal, this coincides with a torrid Summer (and an ensuing beach culture), so in real terms an election would take a full year to take place. If the opposition in Parliament presents and approves of this motion, the Government, if it stays, can perform only minimum functions until a new election is called or until the new President appoints another Prime Minister.

Tough times in Portugal, where austerity has bitten deep into the pockets of all but the wealthiest elites and where policies of social terrorism have closed companies, thrown tens of thousands of people into the street, unemployed, seen half a million young graduates (out of a total population of less than ten million) move overseas and ensured that the Portuguese economy has stagnated at an endemic near-zero growth level.

Just the time for a President with emotional intelligence, balanced, a lateral thinker with a clear vision of his country, his people and the future. This is difficult for a prickly person such as Aníbal Silva, who has according to many never behaved as the President of all Portuguese people but rather treats the country as a feud of the party he led as Prime Minister from 1985 to 1995. This, the time when billions were pouring into Portugal under his captaincy of the ship after adhesion to the European Economic Community in 1985, the decade when Portugal should have been prepared for the European challenge.

And was it? It was so ably prepared that its growth rate spiraled ever downwards culminating in the recent bail-out of 79 billion Euro because the country was technically bankrupt. Wonderful management. Aníbal Silva was Prime Minister while Portuguese fishing fleets were beached, while Portuguese farmers were paid to sit on their backsides or to bury apples and oranges, while Portuguese industry closed. And he was President while his former protégé, Pedro Coelho, ex-leader of Social Democratic Youth and Prime Minister since 2011, practiced policies of social terrorism which shrank the economy to a point where it needs to be placed in an intensive care unit.

Nothing has been said in this newspaper of Aníbal Silva since he was elected for the first time in 2006 basically because there has been little to say, except from a few juvenile quips, snide remarks and ludicrous attitudes more befitting of a troubled teenager in need of therapy than a President.

But there comes a time when silence is morally impracticable. With the result of the latest election, the political situation in the Portuguese Assembly of the Republic, or Parliament, is gridlocked. None of the opposition parties have a majority alone but together they represent the majority of the population; the PSD-PP coalition, called PAF (Forward Portugal), albeit the largest political grouping, also does not have a majority.

Instead of managing the situation with statesmanship, vision and emotional intelligence, what does Anibal Silva do? He appoints the leader of PSD, the largest coalition partner, the incumbent Prime Minister Pedro Coelho, as Prime Minister. Then he launches into a diatribe of epic proportions, proportions so monumental that they enter the field of psychiatry.

And here is the point of my piece. Bloco de Esquerda and CDU (Communists and Greens) are not in favor of the Euro, neither are they in favor of NATO membership. Understandably, because with the Euro a country loses any leverage it once had to control its economy, under the Euro Brussels pulls 97% of the strings and dictates policy over people it understands nothing about, and NATO is basically a terrorist organization which panders to the whims of the weapons lobby controlled by Washington, which in turn acts as the cutting edge of the 666, the Big Six which dictate policy in Washington, in the FUKUS Axis (France-UK-US) in particular and among NATO member states in general (Banking, Energy, Finance, Food, Pharmaceutical, Weapons Lobbies).

However, in the negotiations with the Socialist Party, which by the way are not yet even concluded, these two Left parties stated they would not push for an exit from the Euro or from NATO.

However, in his speech yesterday, President Aníbal Silva stated that a Government could not be constituted or supported by parties which are anti-Euro, anti-integration or anti-NATO. I would invite Aníbal Silva to present to the Portuguese people the article in the Portuguese Constitution where this is stated. He cannot because such clauses do not exist. But let us read between the lines: he is stating that Parties against NATO cannot be admitted in or near Government. Does this not spell an ominous message? Does this not smack of unacceptable levels on influence totally outside any Constitutional norms in any EU member State?

Secondly, these parties made their position crystal clear, in saying they would not push for core policies (exit from Euro or NATO) which in the event were not supported by around 80 per cent of those who voted and which would never pass in Parliament even if they were presented.

So how then can Aníbal Silva claim that he acts in the interests of the markets, when all he is doing is inventing a specter that does not exist? Indeed, he is the one who is creating a scenario of panic in the markets in the likely event that the PSD-PP coalition falls and a grand alliance of the Left becomes the Government. He is the one who tried to divide the Socialist Party appealing for a rebellion against its leader, and in so doing united the Party around its leader and against the President.

He is the one who masterminded the failure of Portugal to have conditions to grab the European challenge with both hands, he is the father of the Portuguese national debt.

Not that impressive. But then again what to expect from someone whose leadership of his own party was so great that he had to distance himself from it in the mid-90s, amid a flurry of attacks from Paulo Portas, the PP leader who he has given the government to...

And how dare President Silva use scare-mongering tactics, himself exacerbating the potential reaction of the markets, by reiterating pure nonsense, insulting the intelligence of the Portuguese people and the citizens of the international community. Thank Christ his Presidency, and his intervention in Portuguese politics, is about to end. Let this article be his political epitaph.