While doing research, I encountered a haunting image; the disturbing scene spoke volumes about the state of our times. A compassionate photographer captured the moment. His snapshot was both sad and poignant. The photo, one of several, was that of a funeral procession. When the horse drawn carriage carrying the flag draped casket of a young Ukrainian serviceman crossed paths with adolescent girls, the two lasses stopped. They bowed their heads. Then with heavy hearts the youth knelt before their fallen comrade. The girls may not have understood the entire context; but they sure recognized the gravity of their encounter. Their humble reverence almost brought tears. I pondered that scene more. That solemn act of contrition stayed with me. Questions abounded. Why did this lad have to die? What possible purpose was served by his sacrificial death; and for whom? Then reality spoke. 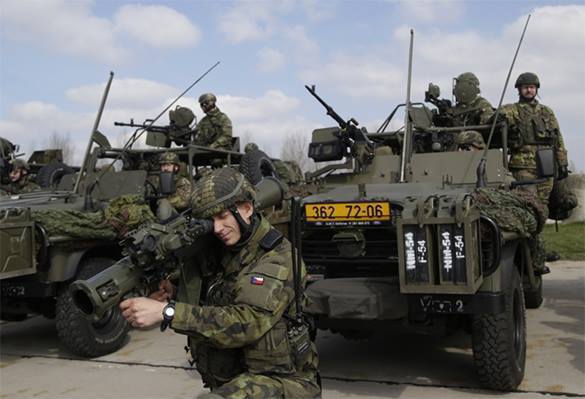 The soldier is a statistic

The departed soldier was now just a statistic; one of the thousands of young men killed in a struggle not of their choosing. Either as conscript or as a volunteer (many enlist due to dire economic circumstances) Ukraine's youth increasingly find themselves at the front lines of the fratricidal war in the East. There they fight their own brethren: Russian speakers whom the West labels 'rebels'. Fact is those 'Russians' are real patriots. As freedom fighters the Donetsk and Lugansk Peoples Republics defend their just cause: they oppose and reject the usurper coup d'état installed Kiev regime. Through successive presidential decrees the junta has even condemned Russian speakers as state undesirables.

Those of us who are better informed than the vassal masses who are breast fed by the West's fake news MSM networks know the real truth. Kiev's young army recruits are ill prepared for battle; both mentally and physically; they are too young to experience the horrors of war. Their armaments when operational are rusty relics from Soviet times. Many servicemen have not been paid for months on end. Soldiers on the front lines even lack the basics: food, clothing and medicine. Ammunition is always in short supply. None of the aforementioned baleful conditions are palpable to the war monger state's 'leaders' in Kiev.

Despite repeated setbacks from failed offensives (especially the stinging defeat in Debaltsevo's cauldron) Poroschenko boasts of increasing hostilities. He has taken his tawdry 'woe is me victim act' round the globe. With hat in hand in America as well as in Europe the provocateur petitions the West; grovels for more funds. The oligarch seeks lethal military aid all the while feigning compliance with the Minsk-2 agreements that call for ceasefire: withdrawal of all heavy artillery from the conflict zone.

Under those untenable circumstances chief of which are the continued machinations coming from their brave leader (Peace is on the table. What's Porous do? Why he shells Donetsk.), Ukraine's youth have deserted; not only have soldiers fled the war zone; many sought shelter nearby. Neighboring Russia has been more than receptive to Ukraine's refugees, citizen and soldier alike; makes no difference to their gracious hosts whether the asylum seekers are ethnic Russians. All are welcomed as Slavic kinfolk.

Meanwhile, the West pays the Ukraine's victims scant notice. No surprise! The mass media are too busy conjuring new lies to combat what America bewails as 'Russian Propaganda'.

For certain the U.S State Department does not seek the pathway to peace; they have no intention of standing down from that which they grievously foisted on the innocent peoples of Ukraine: regime change with the intent of drawing Russia into the conflict. Today, the specter of all out war looms over Europe; even WWW III.

Instead of banging the drum slowly in remembrance of the innocent lives already lost from the fratricidal slaughter in East Ukraine, the NATO gang rolls out pipe bands. Each day their patriotic battle hymns of lore grow louder; the aggressors are in fervor; their bombastic voices approach battle speed. War is all around. Best that Ukraine's youth continue to flee the unrest. Quick as you can...