The Ukrainian authorities are struggling to bring their armed forces in combat-ready status, while hoping to receive assistance from the West. US military instructors have arrived at a military base near Lviv. NATO is exporting weapons from Ukraine. Pravda.Ru discussed issues related to recent military activities in Ukraine with Vadim Fersovich, a military expert, journalist, a veteran of the war in Afghanistan and a participant of combat actions in Afghanistan as part of the US Marine Corps. 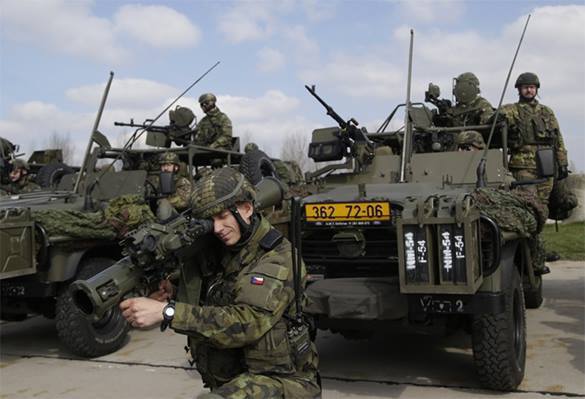 "In Kiev, they believe that three hundred US commandoes, who arrived in Ukraine, are going to save the country like heroes. Why is that so?"

"In Ukraine, people tend to idealize the US Army. This army is best-trained of all western armies, but all programs to train foreign armies with the help of American instructors have proved to be unsuccessful. The problem here is about motivation. One can teach a soldier how to shoot, but soldiers must be motivated to go to war.

"The Americans are not stupid, and they sent paratroopers to Ukraine to understand what the Ukrainian military are capable of. Note that they sent paratroopers, not marines to Ukraine. The US Marine Corps is an expeditionary force. Their task is to seize a territory and organize the work of military and civilian administrations there. If they use paratroopers as instructors, it means that they are preparing soldiers for specific combat operations.

"It would seem that the goal is clear - to teach the Ukrainians to fight. The tactics of the Americans is based on the massive use of modern hardware, active air support, including with the use of attack aircraft and so on. If they have nothing of that at their disposal, it does not seem likely that they will be able to train at least one regiment for the Ukrainian Armed Forces.

"I would conclude that the Americans intend to make Ukraine dependent on their instructors and hardware. They have done this before in Iraq and Afghanistan. As the saying goes, US military overseas act as managers for US-based companies that produce military equipment and software. When those companies need to sell something, politicians orchestrate another war. In battles, outdated military hardware is destroyed to be replaced with new armament as it was the case in Afghanistan."

"It just so happens that the events in Ukraine are a part of a marketing strategy?"

"This is quite true. I was once again convinced of this, when I learned that the Americans were transporting Hummer vehicles from Afghanistan to Ukraine. These vehicles are completely unsuitable to real combat conditions, I could see it myself in Afghanistan. Here is another example. The Americans supplied several radar systems to Ukraine, and those systems were the weakest ones. They operate within a radius of five kilometers. Meanwhile, I know that Ukraine makes much stronger radars on its own territory. Then they will send instructors to show the Ukrainians how to use and fix those weak radars until they realize that American radars are worse than the Ukrainian ones."

"This is an illusion. No one sells state-of-the-art technologies that are often secret technologies. Think of what happened when Iraq found itself in the middle of the Islamic State. Iraqi pilots quickly used up all available stockpile of US laser-guided "Hellfire" missiles. These are modern and efficient missiles, but they cost a lot. The Iraqis turned to the Americans for help and they said that they would ship as many missiles as needed to Iraq, at a good price. Iraq fell victim to this marketing trap. American companies are looking closely to the countries of Eastern Europe, particularly Ukraine.

"Well, let's have a picture of a US marine. They are mostly young guys 18-19 years of age, who want to let off steam. They are excited about adrenaline at war to subsequently suffer from the post-war syndrome. Euphoria is quickly replaced with depression - this is how it works for those young men.

"As for Afghanistan, the Americans do not feel sorry for the money they spend to reformat the mind of the local population. In Kabul, there is a huge number of free American TV channels, the Internet is developing rapidly. At first I could not understand the point: the streets are filled with hungry, ragged, half-naked children running around, refugees keep coming to the capital from across the country, but the authorities are busy building Internet lines. Then I realized that it was being done to educate people accordingly, to provide the required information to them. Today, many Afghanis blame the USSR for the destruction and desolation that they see every day. Who can explain a young man in the street that it was not the USSR, but the West that contributed most to all this destruction after there was not even one Soviet soldier left in the country? It was Western forces that entered Kabul, executed President Najibullah and then staged a civil war."