Say No on World No Tobacco Day

May 31 is World No Tobacco Day 2015. There are five main objectives, aiming to inform the public about the criminal nature of the tobacco trade as well as underlining the health risks and reminding people of the harm that taking up smoking as a habit can do. Why not just say No on No Tobacco Day? 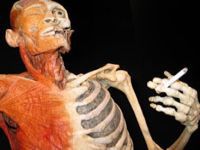 The United Nations Organization's campaign for World No Tobacco Day 2015 focuses on the following five points:

1. Raise awareness on the harm to health caused by tobacco products

2. Show how health warnings are undermined

5. Promote the "Protocol to eliminate illicit trade in tobacco products"

The decreasing cost of tobacco products mean they are becoming available and affordable to youth and poor-income groups, rendering these more vulnerable; the trade in illegal products reduces the effectiveness of pricing to dissuade people to smoke and images on packets to deter smokers; this illegal trade is translated into huge fortunes for criminal groups which engage in other activities such as human trafficking, terrorism, arms and drugs.

According to the UN Fact Sheet on Tobacco, use of tobacco products kills 50 per cent of those who smoke. The figure is six million people each and every year - over five million die as a direct result of smoking and over half a million are passive smokers. Experts predict an increase to eight million deaths by the year 2030.

One in seven people smoke - there are one billion smokers worldwide. One in ten adult deaths is caused by smoking. One person dies every six seconds because of tobacco use. Half of those smoking today will die because of their habit.

Around 80 per cent of smokers are from low and middle income countries, meaning the economic effect is heavier, as families lose income, health care costs spiral and the economy in general suffers.

Children harvesting tobacco get ill, contracting green tobacco sickness. Tobacco use killed 100 million people in the twentieth century. There is a delayed reaction between use and death meaning we are looking at the tip of the iceberg today. It is estimated that this century, one billion people could die from tobacco use.

Tobacco smoke has no less than four thousand chemicals. 250 of these are harmful. Over fifty of these cause cancer. Smokers are killing those around them - second-hand smoke inhalation causes coronary heart disease and lung cancer. In children, it can cause sudden death. 28 per cent of second-hand smoking deaths were children (2004).

Say No! Ask yourself whether you need to smoke to be happy, if you need a substitute for your mother's nipple sticking out of your mouth to be adequate in social situations and whether you can be happy being a non-smoker, and feel free from tobacco, free from the need to fill your mouth, throat, lungs, stomach and intestines with toxic substances which can cause cancers from the lips down to the rectum.

No smoking, no dependency. No dependency, freedom. Once you have worked it out in the mind, you will not feel any symptoms. Quitting is easy. Do it.