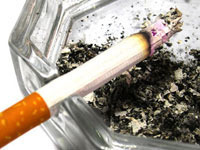 The healthcare committee of the Moscow government gathered for a meeting yesterday. The deputies discussed an opportunity to cut the list of places where smokers would be allowed to enjoy their cigarettes. It was particularly suggested smoking should be banned in all buildings that belong to Moscow. The list includes state institutions, stadiums, hospitals and polyclinics, schools, theaters and other cultural institutions. The populist bill is not going to be approved because of those lobbying the interests of tobacco companies.

The deputies offered to ban smoking on the stairways of apartment buildings. It was also offered to ban the sales of tobacco products in all buildings in Moscow's property.

The current federal law allows smoking in all of the above-mentioned buildings, albeit in specially designated places.

The Moscow deputies hope to reduce the number of smokers in the city by 10-15 percent before 2014, and the number of passive smokers - by 50 percent. They also set the goal to cover 90 percent of Muscovites with anti-tobacco propaganda.

In this connection, it was offered to ban the sales of tobacco products on public transport stops, and on the areas located less than 100 meters far from the above-mentioned buildings. Tobacco advertising shall be banned on all buildings in Moscow property too, the bill says.

The anti-tobacco campaign will cause considerable damage to public catering enterprises. Dividing cafes and restaurants into smoking and non-smoking parts does not help. Even most powerful ventilation systems reduce the concentration of tobacco smoke in the air by only 20 percent.

Smoking kills approximately 500,000 Russians every year. Russian smokers have been getting younger during the recent years too. Forty-three percent of permanent smokers among youth are below 13 years of age. Twenty-one percent of Russian boys started smoking before they turned nine. Moscow-based schoolgirls smoke more than teenage girls and even boys in Russian provinces. Thirty-four percent of boys and 30 percent of girls smoke on a regular basis in Moscow. As for the rest of Russia, the percentage is smaller - 27 and 22 percent respectively. Seventy percent of Moscow schoolgirls have smoking experience, which considerably exceeds the average index in Russia - 57 percent.

Of course, every doctor would say that the Russian authorities must take efforts to approve the new law. Dr. Igor Orlov said, for example, that the average lifespan of people in Finland increased by 25 percent during a year after the government banned smoking in public places ten years ago.

Darya Khalturina, a co-chairwoman of the Russian anti-tobacco coalition, said that the level of heart attacks dropped by 17 percent at once at the countries that passed anti-smoking laws.

It is an open secret that Russian tobacco producers have a powerful and influential lobby. It is not ruled out that the lobbyists of tobacco companies simply stimulated the "sensitive" deputies and did their best to make the new bill not quite viable. At least, the officials representing tobacco companies say that they are not expecting a decline in their profit.

"This is a populist bill, which has no chance to be approved. Even if the Moscow Duma approves it, it will be immediately appealed since it violates the Constitution," Maksim Korolev of Russian Tobacco agency told RBK daily.

Needless to say that those people who do not value their own health much, and those who turn their cash into cigarette smoke, will always be smoking no matter what happens.