In Russia, there is no struggle against smoking at all

In connection with the adoption of the anti-tobacco law in Russia, the Ministry of Health put forward an initiative to introduce fines for displaying acts of smoking on screen and on stage. Film director and Mosfilm CEO  Karen Shakhnazarov shared his views with Pravda.Ru on the subject. 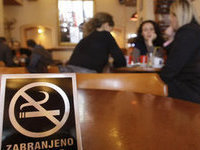 "We've had it before in our practice. During the Soviet era, in the 70s, there was an order from the USSR State Committee for Cinematography, which banned smoking on the screen. And we were not shooting everything without on-screen smoking, nothing extraordinary happened. I support the struggle against smoking, but still there can be artistic goals in films. In America, for example, they struggle against smoking brutally. One can hardly find a place there to smoke, it may come to idiocy sometimes, but they have no such prohibitions in the movies. I do not think that a ban to smoking in films is such an important factor in the struggle against smoking. A much more important factor is the ban on smoking in public places, such as in restaurants. I can totally agree with this, it does work now almost in all countries of the world, but not in Russia yet.

"I do not know how effective the ban on on-screen smoking can be. There are tasks that artists put in films, and still smoking is a part of life. For example, they will be making a film where Churchill is having a meeting with Stalin. The first one never took a cigar out of his mouth, the other one was always with a pipe. How can such a scene be shot then? This is, of course, an extreme example, but such stories can happen. There's also Sherlock Holmes, whose pipe is an inalienable part of his image. Clearly, one does not have to make a film, in which all characters just sit and smoke, but one does not need to bring the situation to the point of absurdity either.

"On the one hand, we struggle with smoking. On the other hand, there is no anti-smoking campaign in the country at all. For example, in America, when the country was preparing for this, they had social campaigns on all the time. It was everywhere - quit smoking, or you'll get cancer. Famous people would appear on TV saying that they were dying of cancer because of smoking. In Russia, we do not really have any struggle with smoking. They want to start with banning smoking in films. We should try and do something to demonstrate that it is necessary to quit smoking," said Shakhnazarov.