Syrian refugees, driven out of their country by the war, are trying to cross the Turkish-Greek border to seek asylum in the European Union. It is obvious that Greece cannot accept all those in need, therefore, the Greek authorities take a tough stance with respect to illegal immigrants. However, people still flee, drowning in the Aegean Sea and in the Maritsa River at the border with Turkey.

A Syrian citizen Achache Adeeb, a longtime resident of Athens who lost his relatives on a boat that sank near the island of Lesbos in the Aegean Sea, spoke of the strict measures by the Greek authorities against refugees. He said, referencing the words of the surviving refugees from other boats: "the boats were turned over and driven away by a Greek ship. According to eyewitnesses, it was a Greek Coast Guard vessel." 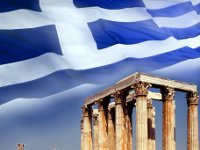 Another witness is a Syrian citizen Salva Al-Rajhi, who along with her family repeatedly tried to escape from Turkey to Greece via the Maritsa River near the city of Edirne, and in the end got into a Greek jail. Salva Rajhi's family set off on a difficult journey to the Greek land six months ago with a group of 40 Syrians. They had to leave Syria because her husband worked for the government intelligence, and the rebels intended to kill him. Al-Rajhi said that in one of the attempts to reach Greece, she along with other refugees was detained by Greek police and forced to return to the boat. At a gunpoint, representatives of Greek police divided the group and pushed their boat back to Turkey. "We were put in a rubber boat. I did not know where my children and my husband were. I almost fell into the water. I grabbed a policeman's hand, but he pushed me away," she said.

In turn, an adherent of Islam Ekrem Sherif-Omadoglu, helping to bury refugees on Greek soil, said: "They came from different countries around the world, but we consider them brothers," The son of a local imam continued: "They came in search of a better life, but unfortunately, they were not lucky." "We are doing for these people what we would have done for our fathers and relatives. We bury them according to the Muslim tradition," he continued, pointing to 400 fresh graves on a remote hill. This cemetery is located on the Greek territory near a Muslim village of Sidari near the Evros River. This turbulent river is about one kilometer wide, and separates Greece and Turkey. Four hundred refugees drowned while crossing the river in an attempt to reach Europe illegally. Only at the end of their journey they found understanding in Greece - local Muslims who bury them.

The Greek police and coast guard deny all the allegations against them. According to the authorities, refugees often drown in the Maritsa trying to overcome the turbulent river in unreliable rubber boats. At sea, they often turn over their boats when they see the Greek coast guard to be rescued and taken to Greece.

Of course, Greece is attractive for the Syrians whose home country has been engulfed in a civil war since the spring of 2011. For a long time the most vulnerable sections of the border of the European Union was the Turkish-Greek border, but recently other EU countries became involved in its protection. According to official statistics, over the past two years over nine thousand Syrians were detained in Greece, and only one percent of these detainees were granted the refugee status.

For two years, groups of women and children have been forced to flee along the dusty roads from Syria to Turkey. Television reports show them walk, with only plastic bags in their hands filled with clothes and household goods they were able to take with them.

Some Syrians find shelter in refugee camps located along the Turkish border. Others search for a better life in Turkish cities like Gaziantep located 100 km from the border. According to law enforcement organizations, there are 57,000 Syrians there at this time. People who have a little more money go to Istanbul in search of a better life. From there, until recently, immigrants used to travel to the city of Edime located on the banks of the river Evros. There, under the cover of the night, smugglers would place them in rubber boats and send them to Greece with rapid flows.

In a desire to get as much profit as they could from the refugees ready to do anything to get to the other shore, the smugglers violated all safety rules. "These people do not care. They locked women and children under the deck. It was a small boat for 20 people. They put 110 people in it," said an eyewitness. "The boat could not sustain such weight. It sailed 10 meters from the shore and sank." This case was not the only one. Last year alone hundreds of refugees drowned, and the total number of victims is unknown since not all the bodies were found.

According to human rights organizations, the forced return of the boats with refugees from Greek to Turkish waters is very dangerous, especially at night, and threatens people's lives. Smugglers transporting Syrians usually act at night. Amnesty International reported that in recent months forty cases of illegal shipments in the Aegean Sea and the Maritsa River were recorded.

According to the UN High Commissioner for Refugees, the number of registered migrant workers from Syria on March 17 of 2013 amounted to 1 million 515 thousand 639 people. Every day, 7,000 people move across the Syrian-Turkish border. According to the agency, 473,587 people found refuge in Jordan, 470,457 in Lebanon, 347,157 in Turkey, 147,464 in Iraq, 66,922 in Egypt, and 10,052 in other countries of North Africa. In addition, about 4.25 million people travelled inside Syria. At the same time, the UN noted that these numbers have increased because refugees arrive constantly, and not all of them had time to register at the time the report was prepared.

The issue of refugee acceptance and their number is one of today's main challenges of the world community. Officially, none of the countries are going to stop accepting refugees. There is Geneva Convention on Refugees, national laws for foreigners have been developed, and money is allocated to the budget for these purposes. However, the tightening of procedures that swept across Europe in recent years is understandable. The position of Greece is logical. At the time when the country is shaken by a severe crisis breeding poverty and unemployment, the influx of refugees, particularly Muslims, will bring new challenges. This, apparently, is the reason why the Greek security forces block the channels for refugees in an informal manner. A solution must be found with participation of the international community, at least in the face of the UN High Commissioner for Refugees. It would be much more humane than discussing the possibilities and ways of delivery of weapons to the Syrian Muslim militants.