The day that Humanity died

Tragedy in the Andaman Sea. A boat laden with refugees drifting in the ocean currents after more than one country in South-East Asia refused to accept them. Deplorable conditions, many dead or dying of illness. The food ran out provoking a fight to the death. Around one hundred were stabbed, hanged or thrown overboard. The day that Humanity died. 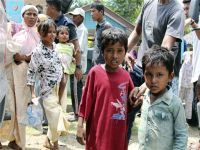 This weekend, Humanity died, if it ever existed. A boat laden with immigrants from Bangladesh and Myanmar (the Rohingya migrants) was intercepted by the Indonesian authorities after drifting at sea for around two months after the Governments of Malaysia and Thailand refused to allow it to dock. Around one hundred people had died as a result of a furious fight which broke out when food stocks ran out.

The crew by then had abandoned the migrants to their fate. Nobody air-dropped food, medicines or other supplies to them. They were left - men, women and children - drifting around in a sea of excrement, starving to death, seared by the sun, lashed by the winds and rain. The Bangladeshis, poverty-stricken in their own overpopulated country and the Rohingya, Moslems living in Myanmar which does not accept them as citizens and which has relegated them to a status of statelessness.

When the boat was finally found by the Indonesian authorities and allowed to dock at the port of Langsa, there were around seven hundred survivors aboard, most of whom had to receive hospital treatment for illness or severe dehydration or malnutrition.

What was going through the minds of the Malaysian and Thai authorities when they refused these migrants the right to dock in their countries? Why did nobody at least provide them with supplies?

Under international law, if indeed today such a thing exists in practical terms, States are obliged to help those in need at sea (*):

The 1982 United Nations Convention on the Law of the Sea (UNCLOS) provides that 'Every State shall require the master of a ship flying its flag, in so far as he can do so without serious danger to the ship, the crew or the passengers: (a) to render assistance to any person found at sea in danger of being lost; (b) to proceed with all possible speed to the rescue of persons in distress, if informed of their need of assistance, in so far as such action may reasonably be expected of him' (Article 98(1));

The 1974 International Convention for the Safety of Life at Sea (SOLAS Convention) obliges the 'master of a ship at sea which is in a position to be able to provide assistance, on receiving information2 from any source that persons are in distress at sea, ... to proceed with all speed to their assistance, if possible informing them or the search and rescue service that the ship is doing so' (SOLAS regulation V/33.1).

UNCLOS imposes an obligation on every coastal State Party to '... promote the establishment, operation and maintenance of an adequate and effective search and rescue service regarding safety on and over the sea and, where circumstances so require, by way of mutual regional arrangements co-operate with neighbouring States for this purpose' (Article 98(2)).

The SOLAS Convention requires each State Party to '... ensure that necessary arrangements are made for distress communication and co-ordination in their area of responsibility and for the rescue of persons in distress at sea around its coasts. These arrangements shall include the establishment, operation and maintenance of such search and rescue facilities as are deemed practicable and necessary ...' (SOLAS regulation V/7).

In addition, the 1979 International Convention on Maritime Search and Rescue (SAR Convention) obliges State Parties to '... ensure that assistance [is] provided to any person in distress at sea ... regardless of the nationality or status of such a person or the circumstances in which that person is found' (Chapter 2.1.10) and to '... provide for their initial medical or other needs, and deliver them to a place of safety' (Chapter 1.3.2).

The 1951 Convention Relating to the Status of Refugees defines a Refugee as a person who 'owing to [a] well-founded fear of being persecuted for reasons of race, religion, nationality, membership of a particular social group or political opinion, is outside the country of his [or her] nationality3 and is unable or, owing to such fear, is unwilling to avail himself [or herself] of the protection of that country' (Article 1A(2)).

The 1951 Refugee Convention prohibits refugees and asylum-seekers from being expelled or returned in any manner whatsoever 'to the frontiers of territories where [their] life or freedom would be threatened on account of [their] race, religion, nationality, membership of a particular social group or political opinion' (Article 33(1)).

In the last three years, 120,000 Rohingya have been forced to flee Myanmar. So far this year, it is estimated by the UNO that 25,000 Rohingya have been transported out of Myanmar, where their plight is inhumane to say the least, by traffickers. It is believed there are several more boats like this one floating on the high seas, ignored by the countries of the region despite the legal principles and agreements set out above.

Worse, it is reported that the authorities of some of these countries have instructed commercial vessels not to help the migrants at sea.

It doesn't get much more callous than that, does it? This despicable story leads us to believe that neither is international law worth anything these days not does Humanity exist outside the realms of a vague chimera or notion or a meaningless precept on paper.