According to the information recently revealed by the UN, Russia has become one of the world leaders on the number of migrants. There is only one state that goes ahead of Russia at this point and thus takes the first position on the list – the USA. Specialists of the largest international organization in the world have decided that Russia has accomplished such a result owing to its policies that encourage migration. However, the real state of things inside Russia is absolutely different. 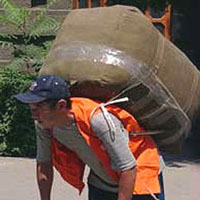 Such an opinion sounded from the new report delivered by Kofi Annan at a recent session of the UN committee for migration and development.

According to the results of the research, the number of migrants residing in Russia reached 12.1 million people in 2005. This number makes up over six percent of the total number of migrants in the whole world. The first place on the list is still taken by the country which was founded by migrants – the USA. There are 38.4 million migrants living in the USA. Germany (10.1 million) and Ukraine (6.8 million) follow the USA and Russia respectively.

Kofi Anna said during his speech that Russia had been the center of a variety of migration flows since the beginning of the nineties. The situation with migration policies was relatively normal in the Russian Federation during the nineties. The number of migrants, so-called guest workers, started growing speedily from the year 2000. In addition to the republics of the former Soviet Union, migrants come to Russia from China, Turkey and Vietnam.

Kofi Annan believes that the Russian government has been running proper and adequate migration policies, which eventually resulted in the creation of the above-mentioned situation. Apparently, the UN Secretary General does not think that Russia is a historical cross-point for many migration flows. Mr. Annan believes that only the countries of “uncontrollable democracy” can be a competition to Russia at this point – Canada, Australia and the Czech Republic. “These four countries (including Russia ) encourage migration to increase the number of migrants and fulfill its national needs,” Kofi Annan said.

The report says nothing about migration-encouraging methods. The leader of the United Nations Organization, however, is supposed to be informed about numerous problems of the Russian migration policy.

The chairman of the Federal Migration Committee, Konstantin Romodanovsky, said that there were not 12 million, but only five or seven million migrants living in Russia. Furthermore, amendments passed to the Law About Citizenship in 2002 categorize citizens of former Soviet Union republics as foreign citizens.

“As a result, five million migrants, who entered Russia without visas, have lost their legal status,” an official from the migration committee Lidia Grafova said. She added that 3.5 million of them were labour migrants, and 1.5 million arrived in Russia seeking permanent residence.

To crown it all, the Russian government does tend to describe its migration policies as proper or favourable. Making a speech at a session of the Russian Security Council a year ago, President Putin stated that four million migrants had no legal status in Russia. The criminal investigation department of the Russian Internal Affairs Ministry said that the number of killed or missing migrants was growing by 30% on a yearly basis.

It is worthy of note that the Russian society has quite a negative attitude to those foreigners who come to Russia searching for jobs. A recent opinion poll showed that only five percent of the polled were ready to support the idea of increasing the migration attractiveness of Russia. The majority of Russians approve absolutely different activities: counteraction to illegal migration and struggle against ethnic criminal groups.