It's treason, and I take full responsibility

In a past Pravda.Ru article entitled Obama: Nobel Peace Prize Winning War Criminal (02/07/2013), I discussed how Barack Obama became the first president to extrajudicially execute two American citizens-Anwar al-Awlaki and his sixteen-year-old son Abdulrahman-in a drone attack.  In my article Judge Rosemary Collyer: Sociopath and Murderer (04/21/2014), I further discussed how Collyer, a federal judge, dismissed a lawsuit filed by al-Awlaki's father against the United States government by mendaciously and hypocritically asserting that government officials "should be trusted and expected to act in accordance with the U.S. Constitution." 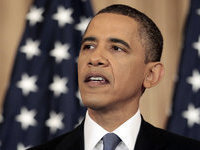 What makes Collyer's statement particularly cowardly and abhorrent is the very Constitution she cites clearly defines the extrajudicial execution of American citizens by their government as treason.

Article Three, Section III states, "No Person shall be convicted of Treason unless on the Testimony of Two Witnesses to the same overt Act, or on a Confession in open Court."  Extrajudicial executions deny American citizens accused of treason the right to confront such testimony and to have their cases heard in open court.

Article Three goes on to state that "no Attainder of Treason shall work Corruption of Blood."  Yet, two weeks after Anwar al-Awlaki was killed, the agency in charge of drone warfare-the CIA-extrajudicially executed Abdulrahman for nothing more than carrying the name of his father.  As Professor Deepa Kumar of Rutgers University said, "Abdulrahman was guilty of no crime."

It would seem that such open contempt for the Constitution of the United States by its President and members of the federal judiciary should strike fear into the hearts of every American, especially since the CIA has, during its sordid history, wantonly committed crimes like rape, torture, murder, and the overthrow of democratically elected governments, and it has even colluded with members of organized crime to achieve its objectives.

But this has not been the case.  Recently, and with scant outrage from the American public, Obama, Collyer, and the CIA again bloodied their hands when two more Americans, Adam Gadahn and Ahmed Farouq, were killed by drone attacks.  What made these killings more than just a two sentence blurb on the back pages of American newspapers and/or on the nightly news was that two Al-Qaeda hostages, Warren Weinstein of America and Giovanni Lo Porto of Italy, were killed as well.

In response to these deaths, Obama stated that he took "full responsibility."

I have often heard these words uttered by people in positions of power.  Yet, to this day, I have no idea what they mean.  How is it taking any responsibility when the responsibility "taker" knows there will be absolutely no repercussions for his/her actions?

In reality, Obama's statement is insulting and cowardly.  After all, the primary reason people refuse or fail to take responsibility is because they fear the consequences.  There can be no bravery without this fear.  Taking "responsibility" without fear is nothing more than a spineless way of saying, "I just committed murder with impunity and I will face no penalties for doing so."

Of course, this isn't the first time in recent memory that the United States has played this game.  The much hyped "Torture Report," supposedly designed to demonstrate America's "willingness" to confess its crimes, was nothing more than a conduit used to underscore how America's position in the world gives it unbridled power to openly and contemptuously defy international law.

Former Attorney General Eric Holder, in conjunction with an amoral gaggle of federal judges and Supreme Court "justices," went to extraordinary lengths to ensure that the crimes of the CIA went unpunished and that torture victims went uncompensated for the atrocities committed against them.  And even as the American government was demanding prosecutions for human rights violations in other countries, one of its principal advocates of torture, John Yoo, was teaching law at a prestigious university, and another, Jay Bybee, was serving as a federal judge.  In fact, under Holder and Obama, the wrath of the legal system has primarily been directed against those who exposed America's criminality to the world.

One of the results of being trained in law is the ability to conquer myopia and be more cognizant of the future ramifications of legal precedent, because, once such a precedent is set, it does not take long for attorneys and politicians to see how far they can expand it.

The precedent that gives Obama the unconstitutional authority to extrajudicially execute American citizens by labeling them "terrorists" may give future presidents the power to extrajudicially execute those who protest against government abuses, those who labor to expose these abuses, those who oppose the ever increasing hijacking of the Constitution, politicians, and judges by corporate interests, and those who express viewpoints (or truths) that oppose these interests.

If Americans fail to realize that treason does not always exist in the shadows, if they fail to comprehend that enemies of the Constitution occupy some of the most powerful positions in government, if they fail to recognize that their very existence can now be terminated without due process of law by one of the most corrupt, undemocratic, and unaccountable agencies in the world, and if they fail to understand that the legal system will thwart them at every turn to cover up, and in some cases promote, governmental abuses and criminality, they will, in the not so distant future, have to take responsibility for ignoring the destruction of the very freedoms they now take for granted.

And the consequences will be devastating.

Author`s name David R. Hoffman
15:02
Viktor Bout says he did not come across Russophobia in US prisons
12:02
Massive fire burns OBI hypermarket at Mega Khimki Shopping Mall to the ground
16:48
US basketball player Brittney Griner exchanged for Russian entrepreneur Viktor Bout
16:31
Zelensky believes Ukraine conflict may end in 2023
20:46
The West is expecting, but not pressing Russia-Ukraine talks
18:27
Putin: The threat of the nuclear war is rising, why deny it
17:17
Ukraine modenises Soviet Tu-141 Strizh drones
15:24
Ukrainian combat drones capable of flying at speed of sound may strike Siberia
14:35
Russian Army continues successful offensive in Krasny Lyman direction
20:56
UK and USA could be part of drone attacks on Russian military airfields
Polish writer shocked to find out Russians will not rise to topple Putin