A recent case in the USA concerning the personhood of chimpanzees and therefore bringing into question the legality of their detainment in a laboratory follows on from a ruling in India two years ago about the status of dolphins as "non-human persons" enjoying specific rights. To what extent should this apply to other animals? 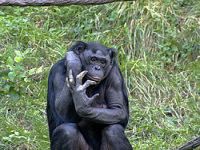 The case of the dolphins

There are those who will say that both events are a non-issue because the Indian Government did not decree that dolphins and other cetaceans should have their rights as non-human persons enshrined in the law, but rather, should be "seen as 'non-human persons' and as such should have their own specific rights and is morally unacceptable to keep them captive for entertainment purpose"; in the second case the wording of the legal document which covered chimpanzees with the term "writ of habeas corpus" was changed the following day.

However, the first case was a landmark first step in establishing global animal welfare rights, taken by India's Minister of the Environment and Forests, a decision which banned dolphin shows or dolphinariums. This makes it illegal to capture or confine cetacean species, which include whales and dolphins, the reasoning being that these animals are highly intelligent and sensitive.

India thus takes an important first step in establishing a universal code of animal ethics and rights. The heroine in this ruling is Puja Mitra, a leading Indian animal rights activist, whose research drive focused on, and introduced, the concept of non-human persons. Other countries to have banned the use of cetaceans for entertainment are Costa Rica, Hungary and Chile.

The work of marine scientist Lori Marino has revealed that cetaceans have large brains and complex behavior and advanced, intricate systems of communication and cognition.

For those who go to a dolphin show, just remember this question: Do you know how dolphins are captured? Most often, they are driven to waters where they cannot swim, the unmarked ones are hauled on to vessels to be carted off to dolphinariums to perform in freak shows and the others are either hacked to pieces, or left to die.

The case of the chimpanzees

The second case regarding the two chimpanzees occurred last week in New York State, USA. On April 20, NY Supreme Court Justice Barbara Jaffe responded to a petition by the Nonhuman Rights Project (NhRP) claiming that two chimpanzees held for research purposes by Stony Brook University were being detained illegally. She signed the order requiring that the University answer the claims.

The legal issue was that the legal writ was filed under the term Writ of Habeas Corpus, which if only applied to humans, means that the chimpanzees are covered with "personhood" status and therefore enjoy the full legal rights of any human being. The following day Justice Jaffe erased the wording Writ of Habeas Corpus... but by then the case had been made, and the second question is the legality of just emending the wording of a document because a media storm has arisen.

In an interview with Nature Magazine (http://www.nature.com/news/chimpanzee-personhood-case-sows-confusion-1.17398), the Executive Director of NhRP, Natalie Prosin, stated that her organization focuses on achieving the legal recognition of the most intelligent, autonomous and self-aware animals as "persons" with specific rights, namely bodily liberty and so in this case keeping chimpanzees in captivity is unlawful.

True, in this case the legal system was quick not to set a complex precedent. However, the scene is set and the legal precepts are established, a basis has been formed to enshrine full rights to living beings which are not Homo sapiens sapiens. How far we extend the line remains to be seen but when doing so, let us take into account the considerable evidence provided from research that animals in general, not just dolphins and chimpanzees, have tremendous skills which we do not begin to understand and animals in general like to play and have fun.

Some of us have already taken the first step, which is not to consume or use animal products. Today it is a choice. Tomorrow, a duty.