Cetaceans should be regarded as non-human persons with their own rights and therefore it is morally unacceptable to keep them in captivity - this is the new ruling by the Government of India, which in a landmark decision has taken an important first step in establishing global animal welfare rights. 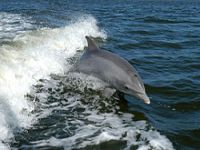 The decision was taken by India's Minister of the Environment and Forests, who banned dolphin shows. All Indian states have been warned by the Government to reject proposals to hold dolphin shows or open dolphinariums, be these requests public or private.

The Central Animal Authority issued the following statement: "Cetaceans...should be seen as 'non-human persons' and as such should have their own specific rights." The direct result is that dolphin parks which have opened recently in India will close and proposals for new ones will be shelved. The move makes it illegal to capture or confine cetacean species, which include whales and dolphins, the reasoning being that these animals are highly intelligent and sensitive.

India thus takes an important first step in establishing a universal code of animal ethics and rights. The heroine in this ruling is Puja Mitra, a leading Indian animal rights activist, whose research drive focused on, and introduced, the concept of non-human persons. Other countries to have banned the use of cetaceans for entertainment are Costa Rica, Hungary and Chile.

The work of marine scientist Lori Marino has revealed that cetaceans have large brains and complex behavior and advanced, intricate systems of communication and cognition.

For those who go to a dolphin show, just remember this question: Do you know how dolphins are captured? Most often, they are driven to waters where they cannot swim, the unmarked ones are hauled on to vessels to be carted off to dolphinariums to perform in freak shows and the others are wither hacked to pieces, or left to die.