The "superpowers" of dolphins 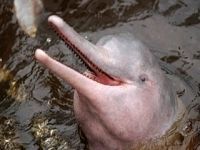 Recent studies show that dolphins have features that could be compared to the powers of comic book heroes. In addition to the animal's capacity for quick healing, which can inspire human medications, scientists discovered that they are able to detect electric fields around them, making it easier to obtain food both in the open sea and in the seabed.

The researcher, Michael Zasloff, Georgetown University, USA, was impressed when hearing ten years ago that dolphins were massively attacked by sharks and many still did not die. "For me, it seemed impossible that a mammal could survive a wound that size in the ocean," he said.

Zasloff discovered that the secret of survival of the dolphins is to accumulate large amounts of a chemical in their body fat. Thus, dolphins are able to quickly recover from shark bites with apparent indifference to pain.

He explains that when the dolphin is attacked, this substance is released by acting as a good antibiotic. "A wounded dolphin is not infected with pus or redness. In humans, an injury of this type would be infected by bacteria in the mouth of the shark, something very difficult to treat with antibiotics we have." Zasloff said that the study results have been published in the Journal of Investigative Dermatology.

When attacked by sharks, they do not bleed to death. This is because with these fat components in the body, the healing process of the dolphins is quite different from humans. Another difference is that the animals also use a good strategy to stop the bleeding. "They make a deep dive after being bitten, which interrupts the flow of blood to the periphery of the body of the animal and allows clots to form," he said.

Another recent discovery about dolphins is the ability of the species, the dolphin of Guyana, to detect electric fields around fish. Researchers at the University of Hamburg found that these electroreceptors are present in small holes in their noses developed from small mustaches. "This makes it a kind of sixth sense," the study said.

The ability to detect electric fields is present only in fish, amphibians and monotreme mammals like the duck-billed platypus.