Warming of water may be the cause of death for animals in Peru...at least 1,500 birds, mostly pelicans, and 877 dolphins died in the last two weeks... 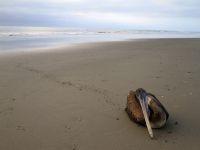 Peruvian authorities have advised people to avoid several beaches and not to eat fish after the mysterious death of hundreds of dolphins and pelicans in recent weeks.

"The Executive Director of Environmental Health has determined that municipalities should guide the public about the risk of frequenting beaches where there are dolphins and pelicans dead," says the Ministry of Health

At least 1,500 birds, mostly pelicans, died of unknown cause in the last two weeks, just as 877 dolphins, according to the Ministry of Environment.

"Until we know with certainty the causes of the deaths, we will follow scientific measures," said the director of environmental protection of the health ministry, Bernardo Ausejo, on Monday.

"We will wait about five to ten days to see if we can free up the beaches," said Ausejo, amid the country's most popularly asked question: what is killing the dolphins and pelicans?

Abraham Levy, president of the Meteorological Service, the leading private weather enterprise in Peru, attributed the deaths to the warm waters of the sea, due to the weather phenomenon El Niño.

"The last case of mass death of sea birds dates back to 1997 (...) and in both there was a significant warming of the sea," said Levy.

"The warming of the sea changes the food chain, which is something complex that begins and ends with the plankton in the sea, for birds to birds, and on the side of mammals it ends with the sea lions ...," explained Levy.

The former deputy minister of Fisheries, Patricia Majluf, said the deaths of birds is due to the lack of anchovies, which migrate south before the warming of the water, and dolphins are the victims of a virus.

Biologist Carlos Bocanegra, a professor at the Universidad Nacional de Trujillo (north), states that dolphins are victims of oil and gas exploration in the waters of the Pacific north of Peru.

"The death of the dolphins is not surprising. It is the noises that are killing the dolphins that appear later on the beaches," said Bocanegra to RPP radio, ruling out the presence of a virus.

On the pelicans, Bocanegra agrees that the cause is lack of anchovies due to warming waters, "the sea temperature in La Libertad (north) reached 22 degrees, when it should not exceed 17 degrees."