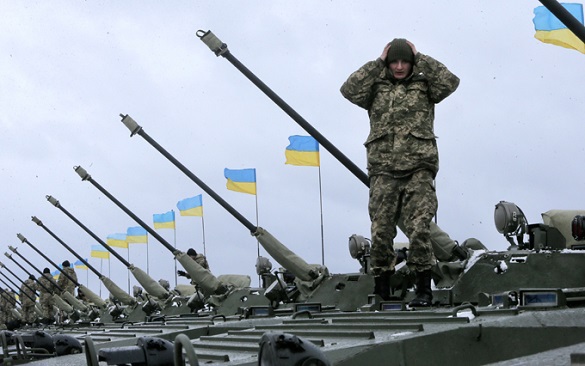 Everything began in November 2013 when former Ukrainian President Viktor Yanukovych refused to sign the EU Partnership Agreement. Currently despite the ceasefire signed in Minsk, the guns have not fallen silent in the eastern parts of Ukraine where the death toll is some six thousand people. Now the shadow of a second Cold War has fallen over the region.

Toward a New Cold War?

Recently the U.S. Army sent heavy weapons and military equipment to Lithuania on the Russian border. It was also announced that the U.S. and NATO countries had planned four separate maneuvers in Ukraine, together with bilateral and multilateral maneuvers in Poland and the Baltic countries.

In the face of the developments in the Baltic area, Russia initiated a giant exercise in 19 wide areas with the simultaneous participation of 8,000 troops in bases in Crimea, South Ossetia, Abkhazia and Armenia. Special forces in the Russian Central Military District began a five-day exercise in the region of Sverdlovsk, where more than 600 troops and 300 armored vehicles took part.

In the Black Sea, the missile carrying amphibious ship Bora, the warship Ivanovets and R-109 boats carried out a simulated attack using real rockets. A continuing exercise by NATO warships in the Black Sea at the same time led to a rise in tensions. The message from both sides was clear; 'we are in charge in the region.'

A statement from Moscow while the exercises were going on revealed the full scale of the tension. Putin announced that he was annulling the European Conventional Forces Agreement (ECFA), the most important document signed at the end of the Cold War between Russia and the West.  NATO described this as a worrying development.

Tensions between Russia and the West are again rising to resemble those during the Cold War. Both sides clearly need to take steps to repair the damage without delay. Blocs are forming fast, with the U.S. and the EU countries lining up against Russia.

Sanctions Are No Solution

Experts from the Carnegie Center state that; "Sanctions will create a perception among the Russians that they are under constant pressure from the U.S. This stimulates patriotism and nationalism and also forges a foreign enemy image embodied by America. New sanctions would only solidify this perception and consolidate the government"1. Indeed, the level of support for Putin's policies has risen by 5-10% each month, reaching 88% in October 2014.

The fact is that both the Russians and objective thinkers do not believe that Moscow is seeking to build a new Soviet Empire. Putin regards NATO's Open Door policy as a violation of the promises given to them following the break-up of the Warsaw Pact. The Russians therefore think that Russia has a natural and legitimate right to protect itself and the surrounding area against the plan to surround Russia by way of Georgia, Ukraine and the Baltic countries and to isolate it. In a statement in the early days of the Minsk negotiations, Putin said that their aim was not to wage war but that they would not accept a world order in which the U.S. was the only leader.

The EU countries, being encouraged towards polarization under pressure from the U.S., are aware that prolonging tensions with Russia will wreak serious harm to their own economies. For example Germany, the largest economy in Europe, has more than 6,000 companies doing business with Russia, with investments of more than 20 billion Euros made over the last 20 years. These sanctions are having a serious effect on Germany, the main pillar of the EU economy, as they are on other European countries. Not for nothing did Merkel make intense efforts during the Minsk talks to bring about a ceasefire between Russia and Ukraine. Merkel was aware of the need to halt the $21 billion losses suffered in the EU countries because of the crisis. It was no surprise that Holland would support Merkel in the talks. France, which ended 2014 in a position of almost zero growth, is currently in the unenviable position of being the sick man of Europe. Replacing the French Economics Minister did not stop France, with the world's fifth largest economy, taking a step back in that ranking. The Dutch demand a relaxation of the sanctions against Russia stemming from its largest oil companies being active in Russia.

On the other hand, European countries are 90% dependent on Russian natural gas. Europe has no way of responding to retaliation by Russia in the form of cutting off natural gas supplies in the long term in the face of the sanctions.

Russia is in turn looked to deepen relations with Asian countries in order to show that it is not dependent on the West. The 30-year natural gas sales agreement signed with China, estimated to be worth some $400 billion, is one outcome of this Russian search for alternative markets. In addition to China, negotiations over new energy projects are also taking place with Egypt and Turkey.

It is therefore expected that Moscow, which is determined to use all the cards it holds against the sanctions, will not be making concessions on such fundamental issues as Crimea. So it is essential for both sides to take the requisite steps for establishing lasting peace and security while the road is still near. A determination of the position of Ukraine, the main fault line between the two sides, will play a critical role in resolving the crisis. Only an independent Ukraine that is controlled neither by Russia nor by the West, yet that is inclusive of both without excluding either side, and that can play the role of a buffer zone in a temporary process, can unite the two sides on common ground.

The Cold War was of no benefit to anyone. A second Cold War will mean nothing but destruction and disaster, and it is therefore essential for world peace for NATO and Russia to adopt balanced policies of reconciliation.