South Ossetia - No Turning Back

August 8th marked the fourth anniversary of the short, but brutal war in South Ossetia. This date gives rise to the annual debate about who started first and internal discussions in the Russian Federation and Georgia. There is no dispute on one issue only: everyone agrees that the date of 08/08/08 was the starting point of a new reality, not only on a regional scale. 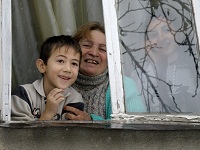 Getting from the checkpoint at the border of South Ossetia and Georgia to the center of Tskhinvali by car takes five minutes. If one leaves Tskhinvali going west along the road leading into the mountain villages, the magnificent scenery on the left side is also Georgia. Before the war in 2008, even if one went to the north towards the Russian border, in a few minutes, one would again be in Georgia - in the pocket of a series of Georgian villages located along the main road.

The microscopic nature of the local scale is difficult to get used to. Most of geopolitics was done on an area of ​​several dozens of square kilometers, where for decades, maybe even centuries, culture and ethnic groups were intertwined together. Now the name of this boondocks, a natural "ladder" between the plain and the highlands, is known to the entire world.
It is no accident. People living in these beautiful places are held hostage to high politics and old unresolved conflicts of bygone eras. The conflict between Georgians and Ossetians did not begin yesterday, and not even 20 years ago. Old people today can tell you about the massacre of 1920. In all likelihood, Georgians have something to tell as well. But every age presents its own way of solving the conflict, which always proves to be only temporary - for several decades. And then everything will be repeated again. This means that the details of the tragedies of recent years will form the basis of mythology that will support the next generation of combat readiness of the inhabitants of these places.

The Georgian-Ossetian conflict is not over. But in this case, the Ossetians had more luck than the Georgians - they managed to win with the help of Russia, and clearly indicate their monopoly on the territory that has always been a source of controversy, simply because it intersected at two different cultures, two different peoples. A conflict of identities is always there at the crossroads of cultures. Today, from Tskhinvali, the Georgian hills seem farther away than they really are.
But everything else happened for the first time. The war of 2008 was different from the events of 20 years ago. First, along with events in Kosovo, it broke the immutable throughout 60 year period order. "Smart heads" after World War II decided that they could stop the natural course of human civilization if they recorded that the then existing boundaries between nations cannot be changed under any circumstances. This is the greatest folly that directly contradicts the logic of the world history.
And yet, despite the abundance of precedents, the world before the end of the last decade stood on this foundation. With the recognition of Kosovo's independence by a few dozens of countries and with Russia's recognition of South Ossetia and Abkhazia, the idea of ​​the inviolability of the borders has collapsed. The old system of values ​​will live by inertia for a number of years, but the powers-that-be would have to invent a universal form of spatial changes that is actually impossible to do.

Precedents of South Ossetia and Kosovo have shown that the actual reality that developed after severe ethnic conflicts where one side has clearly won, and the other - clearly lost, cannot find legal recognition. Until now, the international community either forgot about these problem areas, or insisted on the possibility of restoring the old status quo, which is often impossible. Most interestingly, the initiators of breaking the old system were the United States and Russia - precisely the countries that once created it.

It turns out that in the case of South Ossetia, Russia has a considerable share of responsibility for the viability of the "experiment". Moscow's recognition not only legitimized the reality created by force of arms, but also acted as a guarantor of the adequacy of the system that prevailed in South Ossetia. This is the first reason that makes it clear that it is impossible to go back despite the expectations of Tbilisi. For Russia, the viability of South Ossetia is a matter of reputation.

Compared to earlier times, much has changed not only in the rules of the world politics, but the atmosphere and environment around the conflict. We know from history that the events of the 1920s in South Ossetia were at least as much, if not more, bloody than the days of August 2008. Even better, we know that 20 years ago, when South Ossetia achieved de facto independence, human tragedies and atrocities were even more rampant than four years ago. But how many in the world knew about the troubles of the small area?
We will likely not be mistaken if we assume that even a century ago no one knew what was happening in the neighboring regions of the Caucasus. 20 years ago, there was no Internet, but there was television and newspapers with millions of copies. However, in order for one's voice to be heard in the world, tremendous efforts were required. The voice of South Ossetia in the early 1990's was not heard.

Now everything has changed completely. The war in and around Tskhinvali was fierce, but short, and lasted only five days. The war in the information space continues to this day, and will last a long time. It will not be stopped by anything, not even the investigation by the commission headed by Heidi Tagliavini recognized by the international community.
We are back where we started. Today the problems of the microscopic area in the mountains without roads, with a few people and no oil are known to many millions of people around the world. And this, as well as the presence of their own state, now makes the new realities absolutely unique to the Ossetians. Now their future is largely dependent not on the ability to shoot well but the persuasiveness of their arguments to the world community.
The new generation of the republic has a chance to build new houses, hoping that they will not be burned by the enemy half a century later. Now their future is increasingly dependent not on how well their knives are sharpened, but the rest of the global situation in the world. They have a chance to win this fight - but there is also a chance to lose because the opponent, too, lives in the present and is well aware of the opportunities that the new times provide.
Anton Krivenyuk