From communism to monopolistic capitalism in a single swoop 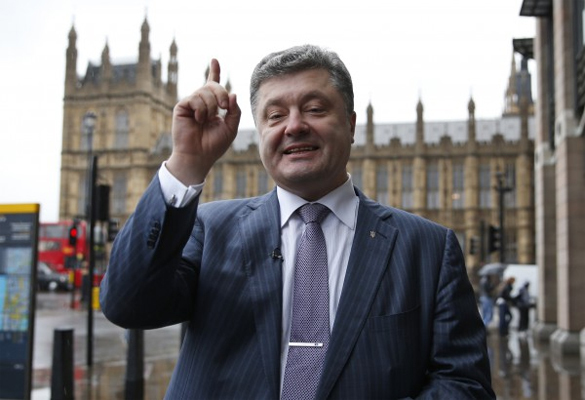 What's the difference between an apparently benevolent Ukrainian oligarch and a charismatic chief of a drug cartel in Colombia or Mexico?  There isn't any!  Economically, politically and socially both were birthed as identical twins; and that behavioral-DNA which exists in both can also be found in most other powerful economic magnates who have metamorphosed in former communist nations, or Soviet republics, from the ranks of the party elite after conveniently setting aside the precepts of Karl Marx... and readily accepting pseudo-entrepreneurial predatory capitalism as the new cult.

And while a chocolate cake was instrumental a week ago in the capture of drug kingpin Servando Gomez in Mexico, the chocolate kingpin in Ukraine, Petro Poroshenko, roams presidentially-free in charge of a bankrupt nation temporarily being held afloat by the IMF and a shotgun western alliance led by the United States.

Although the president of Ukraine was dropped from Forbes' list of world billionaires compiled three week ago, that was just a reflection of the devaluation in the Ukrainian hryvnia.  Twenty-three past Russian billionaires also failed to make the list for the same reason, the value of the ruble in this case (88 listed this year vs. 111 in 2014).

Poroshenko does bring center stage the very calamitous way in which much of the wealth and natural resources which belonged to the people in the many republics of the Soviet Union ended up in the hands of mafia-entrepreneurs, often parasitic scoundrels who from their posts of influence in government would structure the "redistribution" of such wealth. Mikhail Gorbachev's idea of perestroika, no matter how well-intentioned in both its political and social aspects, appears to have been lacking in the most critical element of all: the optimal way of reconstructing the economy.

It is rather difficult to conceive how the leadership in the Soviet Union, with such vast intellectual resources available to them in every field of human endeavor, would just become despondent and let chaos ensue.  I recall an academic friend (economist) telling me over two decades ago, during the transitional turmoil, that Gorbachev fell short with his perestroika and should have architected the creation of a manual dealing with what my economist-friend called "wealth devolution," from the state to the people, and which he named in Russian, peredacha, a word which I jotted down in my notes right next to glasnot and perestroika.

I have long suspected that Mr. Gorbechev had way too much integrity in him to make a good politician, and as a result succumbed to the phony Reagan charm.  Gorbachev did probably expect America to be correspondingly thankful in seeing an end to the Cold War, and would lend a helping hand in the unique transition that would be taking place in the Soviet Union, from state enterprise to private enterprise.  But just as Ronald Reagan had fooled the American middleclass, starting his reverse Robin Hood charade, he double-dipped his charm fooling the Kremlin caretaker as well... which brings us to ask... and where was the Politburo during this crucial time?  As the chief political and executive committee with virtual veto power, was the Politburo derelict in exercising its entrusted duties?  Unfortunately, my reading exposure to accounts dealing with that period is too sketchy and incomplete to render a judicious opinion on how equitable the peredacha might have been.

Two decades after the transfer of wealth from the state coffers to "private enterprise" in the former Soviet republics, we probably need to reserve judgment in how efficient, or inefficient, that transfer might have been.  At the end of the day, what matters is not so much who has ownership or is entrusted with the use of natural and productive resources, but rather if economic results are truly optimized... something ultimately reflected in the so-called standard of living.  Still, one cannot help but wonder if maybe this large oligarchical class created in Russia in such short order, rather than in a gradual entrepreneurial fashion, measures up to an acceptable utilization/consumption of all resources. Discounting for the current "situation" of the ruble, which could likely end relatively soon, Forbes crowns Russia as having the third largest number of billionaire-oligarchs, after the United States and China [Germany and India would have higher numbers at the current petro-dollar exchange rate]. Given both Russia's population and its GNP, that does bring into question whether the people's resources might have improperly utilized or gifted for the benefit of a few during the wealth devolution.

Perhaps the leaders of the new Russian Federation should analyze peredacha... and revisit glasnot and perestroika.  There could be a history lesson to be learned.