On March 11, 1985 Mikhail Gorbachev became the General Secretary of Central Committee of the Communist Party of the Soviet Union. 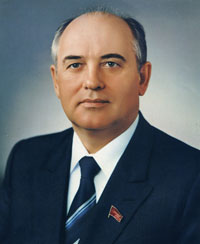 No visionary could predict that his years in office would bring Russia Perestroika, a strange, dramatic, amazing and terrifying historical period filled with great hopes and deadly disappointments. Twenty five years have passed since the beginning of that incredible journey in 1985. There is a life of entire generation between the Soviet Union of Socialist Republics and the new Russia.

Perestroika’s anniversary is a good reason to remember the way Russians used to live and discuss how we see this 25-year old story now.

In 1982 General Secretary of the Central Committee of the Communist Party of the Soviet Union Leonid Brezhnev passed away. In1984 Yuri Andropov passed away, followed by Konstantin Chernenko in 1985. Old and sick members of Politbureau of Central Committee (average age – 75) provoked sarcastic comments of the people. They called the succession of pompous funerals on the Red Square a “gun carriage race.” Everyone in the Soviet Union was familiar with a superstition that the one chairing the funeral organization committee will be appointed the General Secretary. Chernenko’s funeral committee was chaired by a 54-year old Second Secretary, Mikhail Gorbachev, the youngest in Politbureau.

The Politbureau meeting regarding the election of the new General Secretary was scheduled the day after Chernenko’s death, before he was buried. The only candidate discussed in phone conversations of Politbureau members was Mikhail Gorbachev. His election process was sweeping. In the beginning of the meeting Andrey Gromyko, the head of the Ministry of Internal Affairs and the most influential member of Politbureau, stood up and suggested Gorbachev for the position. The vote was unanimous . Twenty hours had passed between the death of the former General Secretary and the election of the new one . This was the beginning of a new period in Russian history.

There is an opinion that Perestroika was designed by Andropov. If he had not been morbidly ill, he would have conducted the reforms. There is information that 15 years before Perestroika he used to tell people he trusted: “The machine has seen better days, it requires repair. It may be a capital repair, but the traditions should not be broken, they’ve proved to be efficient. We should start with the economy. When people feel that their lives became easier, we may ease the reins and give them more air. But we have to do things in moderation.”

It was Andropov who brought the young and promising Gorbachev to Moscow from Stavropol. It was him who sent Ligachev, Secretary of the Central Committee, to Sverdlovsk to take a closer look at progressive Yeltsin.

Not long before his death, hopelessly ill, with failing kidneys, he told his supporters:”Our economy needs a boost.”

The boost (of a scientific and technical progress) was the first thing that General Secretary Gorbachev announced at the plenary assembly in April of 1985. The boost had to be strong enough to provide every Soviet family with a separate apartment, as per the Party’s promise, by 2000. The people liked it a lot. Later Gorbachev abandoned the idea of building communism and called the society to “improve socialism” and give it a “human face.” Later the notion of “Glasnost” was created to give the socialism that “human face.”

In 1986, a landline phone was installed in the apartment in Gorky (Nizhny Novgorod), where Andrei Sakharov, a human rights advocate and Noble Prize laureate lived under house arrest. It was obvious he would soon receive a call . Soon, Gorbachev called him: “Come back and resume your patriotic activity.” A week later, Sakharov and his wife came back to Moscow.

A sensational film “Repentance” directed by Tengiz Abuladze was shown to the general public. The books banned earlier were published, including those by Alexander Solzhenitsyn, Mikhail Bulgakov, “Children of Arbat” by Anatoly Rybakov, “Life and Fate” by Vasily Grossman, “Doctor Zhivago” by Boris Pasternak, “The Scaffold” by Chingiz Aitmatov and other books that people have already read in underground press. Movies “Assa” directed by Sergey Solovyev and “Interdevochka” by Vitaly Pitchul were shot. People handed to each other thick magazines “Novy Mir” (New World) and “Znamya” (Banner) that published sensational materials, advocacy pieces and Perestroika-period fiction.

It took the country some time to feel the “wind of changes.” “We are waiting for changes,” sang popular singer Victor Tsoy, and his song became the anthem of Perestroika.

The shelves in stores were empty. In May of 1985, when the dry law was enacted, people started knocking each other down in lines and a bottle of vodka became the strongest currency.

It was appropriate to give a bar of imported soap as a birthday gift, let alone tights, a pack of Marlboro, or chewing gum. A popular joke was “If you come to my house and drink tea with sugar, then you should wash your hands without soap.”

The period was also marked with appearance of aerobics, and Soviet ladies rushed to dance to cheerful rhythms. The country was trying on “tie-dye” jeans (often tied and dyed in people’s own kitchens), dreaming about Tavria cars whose design was based on that of Zaporozhets, and listening to the sweet-voiced guys from Modern Talking without understanding a word. TV screens were displaying incredibly brave and open analytical programs, “Vzglyad” (The View) and “Projector of Perestroika” among them.

Mikhail Gorbachev: “We missed a lot… And then God sent us Yeltsin”

The first and the last President of the USSR talks about Perestroika and who invented it, and why the Soviet Union collapsed.

“The country had to change. It is not an invention of a group of people. I remember March 10, 1985, the day of death of Konstantin Chernenko. Before we went to Politbureau meeting to decide what to do next, I gathered everyone at 11pm. Half an hour before that I asked Andrei Gromyko (at the time, 1st Deputy chairman of Council of Ministers of the USSR), to meet with me. We met, and I said “We have to do something, because people will get out to the streets. We are burying the third General Secretary in a row. Tsoy understands that we need changes, and we don't ? It is unavoidable!”

You can say that Perestroika has begun under Andropov. Special groups were created. Andropov was an experienced man and realized that something had to be done. Back in 1982, when he was coming to office, there was a colossal recession. We, as a party, had to look for a way out, otherwise people would hustle us.

Many things should have been done differently. First of all, the Communist party had to be reformed. An entire conglomerate of parties was under the roof of the Communist party, including communists, liberals, Christians. At some point it became so unbearable that it turned into a coup. Who was leading the coup ? Politbureau members ! Only in 1991 we accepted the program draft and scheduled an extraordinary congress. We missed something, we got confused.

The situation with food and goods became increasingly worse. We were not the only ones to blame. Now we have access to the documents that explain everything. Reagan asked the King of Saudi Arabia to lower prices for oil, which was done, and we lost 2/3 of the currency. All out five year plans failed.

There were confrontations inside the governing party, members were arguing. It was a difficult time for Ryzhkov. He had 13 deputies, all of them technocrats. Decisions were made during plenums, but then dropped. These were decisions regarding cooperatives, factories, and lease, everything that could change the economy.

The anti-alcohol campaign did not help either. Everyone says: “How could Gorbachev, a seemingly smart person, implement this ridiculous campaign! Anti-alcohol campaign in Russia! But it was invented by the smartest person, Leonid Brezhnev. He did not want to do it, but had to agree under pressure. Gromyko was saying that once he and Brezhnev were coming back to Moscow from their residence in Zavidovo and he told Brezhnev “We have to do something, our people are drinking themselves to death, the country is paralyzed.”

Brezhnev was silent for a minute and then said: “Andrei, Russian people are not able not to drink.”

We were late with reforming the Soviet Union that really needed it. We grew our own elites, our economic complexes, political and cultural institutes. We had formed nations that met state requirements, but lived according to old rules. We had to decentralize. And we did not have to do anything special! Read Stalin and Brezhnev constitutions. They say that Union Republics are state formations that have sovereignty and a right to choose whether they should stay in the Union or not. It was designed as a long term plan. I think we missed the moment. We believed in the Soviet Union more than we believed in ourselves. And a lot of toasts were made to friendship.

When the Soviet Union disappeared, pro-western liberals were foaming at their mouths: finally! We could not win a war with them, but they collapsed on their own! They had to use it. And all promises not to go to the East were abandoned. Now they are justifying themselves by saying that the promises were given to a different country, the USSR, that no longer exists. That’s their balancing acts. And now this mess has to be cleaned up.

We conducted first competitive elections. My opponents in Politbureau could not remove me through political methods. Then they organized the coup. And then God sent us Boris Yeltsin. But how did he send him ? We dragged him out. At the same time, Ryzhkov used to say “You’ll have a great deal of trouble with him.” And we did. Not just us, but the entire country.