Continued. Read Part I, Part II and Part III of the article 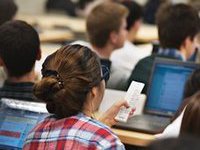 Slavery by Another Name

If there is one major inconsistency in life, it is that young people who know little more than family, friends and school are suddenly, at the age of eighteen, supposed to decide what they want to do for the rest of their lives. Unfortunately, because of their limited life experiences, the illusions they have about certain occupations do not always comport to the realities.

I discovered this the first time I went to college. About a year into my studies, I realized I loathed my chosen major. Unsure where to go from there, I decided to quit and join the working world.

For several years, this decision seemed sound. I worked a few part-time jobs before eventually being hired by a security company that had been in existence for over a hundred years. This longevity, and the fact there will always be crime, convinced me I had found lifetime employment. As an added bonus, my employer offered a tuition reimbursement benefit, and, believing a degree would improve my chances for promotion, I returned to college.

But fate had other plans. My department was shut down and I was unceremoniously laid off. I had enough savings to finish my final semester, but I graduated during an economic downturn, and therefore decided to do what many college graduates do when their undergraduate degrees fail to produce tangible economic benefits: I continued my education.

Many college graduates make this choice because student loan payments are normally deferred while one is attending a graduate or professional school. Unfortunately, this choice also means that students are often piling one debt on top of another, with no guarantee their employment prospects will be enhanced.

In some instances, an advanced degree can even work against a person. Employers who simply want workers with college educations are often hesitant to hire applicants with advanced degrees, believing they will eventually demand higher wages and become dissatisfied if they do not receive them.

After making the decision to continue my education, I had to decide what area of study I wanted to pursue. I was always fascinated with television courtroom dramas, like Perry Mason, so I decided to go to law school. Plus, innocent idealist that I was, I wanted to make a positive difference in the world and thought law was the way to do it.

It wasn't long, however, before the corrupt and hypocritical realities of America's legal system began to sweep into my consciousness, and, for the second time in my academic career, I regretted the decision I had made. Unfortunately, I had already borrowed thousands of dollars to pay my first year's tuition, so my choices were to either spend the remainder of my life paying back a loan that had garnered me nothing or finish law school and hope my misgivings about the legal system were unfounded.

I'm sure some readers will have little sympathy for my dilemma, contending that nobody forced me to borrow that tuition money or to go to law school.

But this argument ignores an aspect of American culture that routinely bombards people with messages touting the benefits of a higher education and testimonials claiming the more educated you are, the better your life will be.

Many law schools do little to discourage this culture and much to exploit it. During our orientation process, my classmates and I were regaled with stories about the potential income our law degrees could generate. It was only near the end of my final year, shortly before graduation, that I was truthfully informed about how dismal my employment prospects actually were.

The class I graduated with, for example, had over 150 students, and it was just one of four law schools in the state. If these other three schools had a similar number of graduates, it meant that 600 prospective attorneys from just one state would be looking for employment.

Some undergraduate and professional schools are "fighting back" by arguing their role is to provide students with an education, not to ensure they have jobs. While this argument may appear tenable, it ignores the principal reason most people seek out a higher education in the first place. It is doubtful that anyone who leaves a low paying job and/or borrows thousands of dollars in student loans does so with the goal of simply receiving a diploma and then returning to the same, or a similar, low paying job.

Receiving student loan money to obtain a higher education is easy, perhaps too easy. Often forgotten is the fact that these loans will eventually have to be paid back or they will go into default. Absent exigent circumstances, they cannot be discharged through bankruptcy. Defaults can bring with them incessant telephone calls from collectors, lawsuits, bad credit ratings, wage garnishments, the seizing of tax refunds, and reductions in Social Security payments that can plague you for the rest of your life.

If this series of articles accomplishes anything, I hope it awakens Americans to several realities: first, how corrupt, mendacious and hypocritical their legal system really is; second, how some institutions of higher learning, like the University of Colorado, are destroying academic tenure and academic freedom; third, how the "marketplace of ideas," so crucial to a free society, is being decimated through the increasing use of adjunct professors; fourth, how some for-profit colleges are actually doing more harm than good; fifth, how the benefits of higher education are being smothered by its stifling costs.

In the past, middle-class Americans were easily subjugated by the fear of losing their jobs, homes, and savings. But as the middle-class vanishes into the ranks of the poor, as angry and frustrated people come to recognize their salvation does not reside in the vacuous platitudes of politicians bankrolled by billionaires, and as the greed, corruption, and hypocrisy of America's institutions generate more problems than solutions, America will become a nation destined to implode.

Today I am just one of thousands enslaved by student loan debts that I have little, if any, prospect of paying off. Although it's too late for me to shed my shackles, hopefully stories like mine will prevent people from forging their own shackles in the future.

When all is said and done, people with dreams of bettering their lives, and the lives of others, through higher education should not find themselves living a nightmare.

There was a time when I had dreams of saving the world.

Now I cannot even save myself.