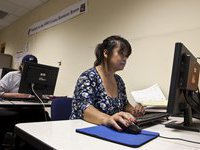 Several years ago, a young lady came into the college where I was teaching to inquire about a full-time instructor's position in the sociology department. She was advised that only adjunct positions were available. Her response was, "No thanks. Once an adjunct, always an adjunct."

Her words still echo in my mind.

Even as colleges and universities raise their tuition costs, they are relying more and more on adjunct instructors. Adjuncts are part-time instructors contracted to teach on a semester-by-semester (or term-by-term) basis. They are classified as "at-will" employees, are usually poorly paid, and are not provided with benefits, such as health insurance, enjoyed by full-time instructors. Some are motivated by their love of teaching, but most hope to eventually segue their adjunct positions into full-time jobs.

Yet this dream often becomes their Waterloo. In order to exploit the education and experience of adjuncts as long as possible, universities and colleges have become adept at dangling the "carrot" of full-time employment in front of them, without ever intending to let them reach it.

Several years ago, as I was struggling to build my law practice, I decided to supplement my income by taking an adjunct position at a local university. It wasn't long before I came to enjoy teaching more than practicing law and hoped to become a full-time instructor.

My Department Chairperson (hereinafter Department Chair) encouraged these hopes, and my teaching skills consistently received positive reviews from both students and peers. Eventually I began teaching four undergraduate classes a semester, and was even "borrowed" by another department to teach one of their Masters Degree courses.

After five years of serving as an adjunct, a full-time position finally became available. The head of the "Search and Screen Committee" (hereinafter Committee) assigned to select promising candidates was also my Department Chair, so I was not surprised when she informed me that I had been hired to fill one of the full-time positions.

But approximately a month later, a letter in my campus mailbox, signed by my Department Chair and other members of the Committee, informed me that I had not even been selected for an interview.

A little angry and even more confused, I asked my Department Chair how I went from being hired full-time to not even being selected for an interviewed. She replied that certain university administrators had rejected her request to hire me. But when I contacted these administrators, I was told the Committee had not even forwarded my name to them. I then informed them that I had been promised a full-time position, and they remarked that this promise was a "moot point."

I later learned that my Department Chair had originally intended to give me a "pretextual interview" to keep me working as a "loyal, part-time instructor," but after I contacted the administration, she denied offering me a job at all, and claimed I was "unqualified" to work full-time.

I subsequently learned that this was a lie as well, because teaching four classes a semester would have classified me as full-time, with the commensurate salary and benefits, had my Department Chair not fraudulently listed me as a "visiting professor."

Having no opportunity for advancement where I was, I accepted an adjunct position at another college. But it wasn't long before I discovered that even though the faces were different, the dishonesty was the same.

For the first two years, whenever I inquired about full-time employment, I was told that the department in which I taught was losing money due to poor enrollment. But this lie was exposed when my Department Chair suddenly passed away.

I agreed to temporarily run the department, believing that the more experience and knowledge I acquired, the better my chances of being hired full-time. One of my duties involved reviewing the department's budget, where I soon discovered that it was not only profitable, but had been so for some time.

About a week after I made this discovery, in what I can only describe as the apex of cluelessness or audacity, I was asked if, in addition to running the department, I would be willing to teach a full-time course load for part-time pay.

Throughout history, academics have made extraordinary contributions to the "marketplace of ideas." They give lectures, conduct research, and write books, essays and polemics that encourage discussion, questioning and debate.

But if the civil liberties enshrined in the Bill of Rights, the provisions of academic tenure, and America's legal system do not protect full-time, tenured professors like Ward Churchill from economic retaliation, then how can adjuncts be expected to contribute to the "marketplace of ideas"?

Make no mistake about it. Although the reverberations have yet to be felt, the pestilence wafting from the campuses and courtrooms of Colorado and higher education's increasing reliance on adjunct instructors will soon turn the "marketplace of ideas" into a ghost town of intimidation and silence.

Coming in Part III: For Whose Profit?