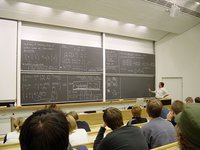 Disillusioned with the machinations of so-called "traditional" colleges, I became an adjunct instructor at several "for-profit" colleges.

Thanks largely to the power and pervasiveness of the Internet, "for-profit" colleges (hereinafter for-profits) have become a growing phenomenon in America.  They have also been the subject of much political debate and the focus of a Frontline special entitled College Inc.

Unlike traditional colleges, for-profits are owned and managed by corporations.  They solicit students through aggressive advertising campaigns and by offering flexible class schedules, including a variety of "Online Courses."  Prospective students are often told that they can learn "at their convenience," and/or obtain a degree in less time than it would take in traditional colleges.  They often have branches in several states, and their academic programs tend to be focused on particular areas of study, omitting courses, such as history and/or the physical sciences, that students might be required to take at traditional colleges.

For-profits often attract prospective students that traditional colleges might not accept:  the poor, high school dropouts who have obtained their GEDs, single parents who had children at an early age, and individuals with a history of poor academic performance.

The composition of their student bodies invokes the most debate over the merits of for-profits.  On the one side is the argument that mistakes and/or poor decisions people made when they were young should not preclude them from opportunities to better themselves and their employment prospects.  On the other is the argument that for-profits actually exploit the most vulnerable in American society by enticing them to take out costly government and/or private loans to pay for degrees that ultimately are not worth the paper they're printed on.

I have seen both sides of the issue.  For-profits with strict policies regarding attendance and academic performance can provide their students with a quality education.

Unfortunately, in most for-profits student retention is a persistent theme, for both monetary and accreditation reasons.  This can influence them to retain students who, in a traditional college setting, would most likely be expelled for academic reasons.

Also, some students who enroll in for-profits do not do so for educational purposes, but to use the residual funds from their student loans for personal living expenses.

The policies of one for-profit where I taught actually encouraged such borrowing.  Daytime courses met four days a week for one month.  Students were only required to attend the first two classes of the term, then they could maintain their attendance by simply coming to class for five minutes a week, meaning they could be absent roughly 87% of the time.

Of course, students with such poor attendance rarely received passing grades; however, since they were often given two or three opportunities to pass a particular course, and since the same courses were not always offered every month, a student could potentially thrive at a for-profit for months, even years, before finally flunking out, oftentimes borrowing thousands, perhaps even tens-of-thousands, of dollars in student loans in the process.

Laissez-faire theorists often contend that for-profits that focus primarily on their short-term profitability will inevitably be "hoisted by their own petards," because employers will eventually refuse to hire graduates from for-profits that inadequately educate their students.  But many, perhaps most, prospective students do not even research a for-profit's job placement record, and even when they do, it's usually not a deciding factor in their decision to attend.

For example, one for-profit where I taught had an excellent career services center and a good record of finding employment for its graduates.  Yet it still experienced an exodus of students when rumors surfaced that a competing "for-profit" with an inferior job placement record was allowing its students to borrow and keep more student loan dollars for personal use.

In response to the growing political backlash, a for-profit where I was teaching ordered its employees, under threat of termination, to sign a contract banning us from making statements about the college that were considered to be disparaging, derogatory, ridiculing or critical.  The people and entities this ban encompassed included students, accreditors, regulators and lenders.  If the college determined that an employee had made such statements to any banned persons or entities, he/she would have to pay $1,000 in "liquidated damages."

When I protested that part of the college's accreditation procedure involved accreditors meeting personally with faculty members to discuss college issues, I was verbally assured that the contract's prohibitions would not apply to such discussions.  But when I requested that this assurance be memorialized in writing, I was refused.

So I refused to sign this contract, even though several attorneys advised me that its terms were probably unenforceable in a court of law.  Knowing the ludicrous rulings in the Ward Churchill case, and the legal system's propensity to protect the rich and powerful, I had little difficulty envisioning a corrupt judge decreeing I was legally bound by the terms of this contract, because I was an attorney and therefore  "knew" what I was signing.

Given the amount of tax dollars for-profits receive in student loan money, it is a frightening thought if contracts like the one I refused to sign become an industry standard.  A report by Senator Tom Harkin recently disclosed that "taxpayers spent $32 billion in the most recent year on companies that operate for-profit colleges, but the majority of students they enroll leave without a degree, half of those within four months." (The New York Times; July 29, 2012).  Harkin's investigation also revealed that "nearly half of all federal student loan defaults occur at for-profit schools, although the schools have only 10% of higher education students." (USA Today; October 18, 2011).

When one considers the state of today's economy, the fact that graduates from traditional colleges are increasingly competing with students from for-profit colleges for a diminishing number of good paying jobs, and the legal reality that student loan debt cannot be discharged through bankruptcy, this question must be asked:  How many for-profits are truly serving their students, and how many are simply making them more destitute?

This question is extremely relevant, because more and more employers are now basing their hiring decisions on an applicant's credit rating.  This means that people who default on their student loans, even through no fault of their own, may find themselves in the "Catch-22" of needing a good paying job to make payments on these loans, but being unable to obtain a good paying job because they cannot make payments on these loans.

Coming in Part IV:  Slavery by Another Name