Donald Trump has turned his cards over. From ambiguous allusions of US military intervention in the Syrian crisis, the 45th US President has moved on to overt blackmail. 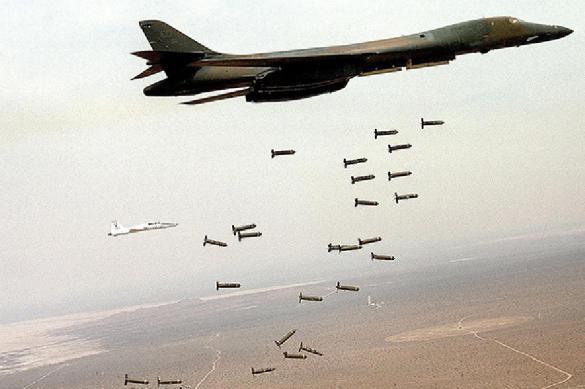 On Monday, March 12, he instructed US Ambassador to the United Nations Nikki Haley to address a UN Security Council meeting with a threatening, ultimatum-like statement: if the UN is unable to achieve a ceasefire in Eastern Ghouta near Damascus, the USA will be prepared to strike a military blow on Syria.

Haley recalled that in April 2017, the United States struck a missile blow on Ash Shayrat air base of Syrian government forces in the province of Homs. That attack, she said, came in response to a chemical attack in the Syrian city of Khan Shaykhun.

The US delegation to the UN distributed a draft resolution demanding that military operations in Damascus and its suburbs be stopped. Naturally, the USA addressed the requirement to Moscow and Damascus, because Syrian government troops conduct military operations with Russia's support  to oust pro-American terrorists from Eastern Ghouta.

Washington seems to be worried because civilians of Eastern Ghouta began leaving the area for the first time in a long time thus giving a hope for the situation to improve. The US administration does not need such a development, because the United States intends to use 400,000 civilians, who, according to the UN, still remain in Eastern Ghouta as hostages for guerrilla operations against Assad's troops.

The essence of Trump's ultimatum to Putin is this: the United States submitted a draft resolution to the UN Security Council demanding a 30-day truce in Damascus and its suburb of Eastern Ghouta.  Even if Russia votes for this resolution, it does not mean that US-backed militants in the province of Damascus will honour the truce.

In this case, Trump will accuse Assad of violating the cease-fire and using chemical weapons. He will then give an order to inflict a new massive blow on Syria. This time, however, the US missile strike will target not only military facilities of the Syrian army, but also government buildings in Damascus, including the residence of Bashar Assad in the Syrian capital. "Over the past two weeks, the Russian and Syrian regimes have been busy labeling every opposition group in Eastern Ghouta a terrorist group," Haley said, thus suggesting that the United States would continue supplying weapons to militants who use the population of Eastern Ghouta as a human shield.

Rex Tillerson's recent demonstrative refusal to meet with his Russian counterpart Sergei Lavrov in Addis Ababa became a signal that Washington sent to Moscow: the Trump administration clearly does not like the status quo in Syria, and the USA may exacerbate the crisis, even if it may entail a clash of Russian and US fighter jets in the sky over Syria.

It appears that Trump ignores Russia's military presence in Syria, even despite the recent deployment of four Su-57 multi-purpose fifth generation fighters there. A new report that Trump has recently received from Chief of the Central Command of the US Armed Forces (CENTCOM), General Joseph Votel, indicates that the United States has lost the initiative in Syria, where, according to the author, Russian anti-aircraft missile forces threaten the US Air Force in the region.

The report also said that Iran has been gradually expanding its zone of influence in the region hiding behind Russia's military support and relying on Hezbollah. In addition, Tehran supports the actions of Shiite Houthis in Yemen, which, as the report says, aggravates the civil war in Yemen and threatens Saudi Arabia and the UAE. Iran's ultimate goal is to create an arc of influence, or the Shiite crescent, across the entire Middle East.

Israel is joining the dangerous game of saber-rattling. Israel has recently held large-scale military exercises with the US. "Israel will do everything possible to prevent the creation of the Shiite corridor between Iran and Syria," Israeli Defence Minister Avigdor Lieberman stated.

It is highly likely that the IDF may strike Iran's military facilities in Syria. If Tehran responds to such a challenge with a missile strike of its own, a big war between Tel Aviv and Tehran may break out. If this happens, the civil war in Syria will go into the background.