The anti-terrorist system in St. Petersburg has failed. After the explosion, one should analyse why and where counter-terrorist measures did not work. Member of the Federation Council, chairman of the Defense and Security Committee Viktor Ozerov said that "the tragedy in St. Petersburg means that counter terrorist measures, as well as legislative bodies and special services have not worked." "Now we need to analyse the reasons to understand  where exactly our system has failed," Ozerov told Russia-24 television channel. 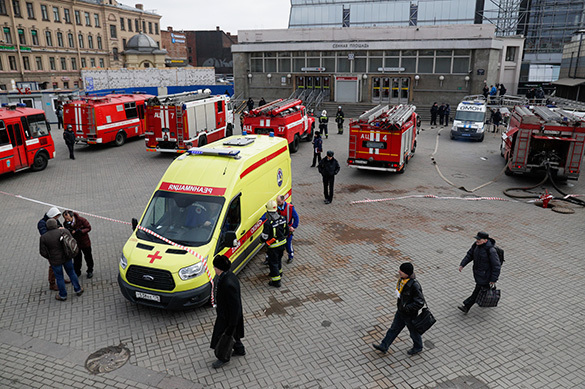 According to him, access systems to the metro and other transportation facilities should detect explosive devices and substances such as TNT and explosive gases. "This system should be further improved, as well as the system to recognise faces of the people who come to stations," the senator added.

Member of the Legislative Assembly of St. Petersburg, Boris Vishnevsky, wrote on his Facebook page that hundreds of millions of rubles (if not billions) from the budget of the city had been spent on security measures in the metro.

"Everything was reduced to meaningless metal detecting frames, where no one is checked, especially at rush hours, when it is practically impossible, because so many people have so many metal objects in their pockets and bags - keys, telephones, coins, computers, etc. As a result, the frames slow down the movement of passengers, but they do not increase security in any way, and we all could see it yesterday," the official wrote.

The agenda of the meeting of the Legislative Assembly of St. Petersburg, which is to be held on April 5, already includes a question about security measures in the metro.

According to Vishnevsky, existing security measures in the St. Petersburg metro are ineffective. "They have proved to be absolutely inefficient. This approach - to install metal detecting frames everywhere - does not work. They have installed frames and surveillance cameras but there is zero effect from this," he added.

"Over the past year and the beginning of the current year, Russian special services have prevented dozens of terrorist attacks that could have taken many human lives in Moscow, St. Petersburg and other Russian cities. I repeat, it goes about dozens of terrorist acts. This is a very alarming fact, because it means that terrorists are always active in Russia, they always work to kill people," the official said in an interview with Pravda.Ru.

"That said, it is migration services and border guards that should a special role in combating terrorism. It is important to introduce personal responsibility of officials who directly or indirectly allow the penetration of extremists into the territory of our country. One requires a highly responsible, coordinated and thought-out migration policy.

"Attempts of the United States to build a wall on the border with Mexico, or the same attempts that Israel makes in relation to Palestine is not a way out. Such an approach generates negative sentiments within societies. Yet, it is important to understand that radical Islamists continue coming to Russia and other countries. The migration regime must work within the framework of law, but the regime must be very strict.

"It also makes sense to amend the Criminal Code accordingly. If terrorists commit atrocities, their relatives and friends  everyone, who was aware of imminent attacks, should be held accountable. We are talking about mass murders, about dozens and hundreds of lives taken away from innocent people, including children.

"One should pay special attention to the criminal community as would-be terrorists are often recruited in penitentiary institutions, especially among those who have already been involved in such crimes. Foreign special services, including from the countries that support Islamism, maintain close contacts with penal colonies in Russia. This is another factor that deserves close attention.

"Most importantly, it is the whole society that should be involved in daily activities to prevent terrorist attacks. We live in a difficult time, when terrorism becomes a horrendous everyday occurrence. Therefore, one should respond to this challenge on all levels - from schools to special services."