The Geneva peace talks, meant to resolve the crisis in Libya where rival militias and their respective governments are at war over the control of the country, so far failed to be fruitful. It in fact is believed that the lame leading the blind would have yielded better results than the UN-brokered mediation, facilitated by a Bilderberg Group member named Bernardino Léon, between a government of CIA assets and a rival government of Al Qaeda terrorists and the like. The latter, self-proclaimed Tripoli-based government, on January 19 proposed to move the talks from Geneva to the Libyan desert town of Ghat, which led to the suspension of the dialogue. Two days earlier the rival factions called for a ceasefire starting on January 18 at midnight, even though the Libya Dawn militia, which is terrorizing the capital of Tripoli since last July, was not represented at the talks. And with ongoing heavy fighting in several Libyan cities - including near Ghat - as well as heavy clashes near oil ports and fields, the ceasefire already has proven to be just another empty notion. The only clear outcome of the talks so far seems to be that Libya Dawn was given the opportunity to run away with the bone that the other factions were feebly negotiating on in Geneva. 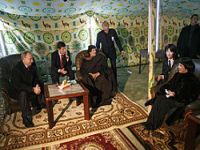 But it wasn't the representatives of the Libya Dawn militia that were the big absentee at the Geneva peace talks. While a motley crew of terrorist gangs and extremist figures was invited to the mediation, no seats were reserved for the Libyan Popular National Movement (LPNM), which was founded in early 2012 as the political body of the majority of the Libyans who support the Jamahiriya, also known as the Green Resistance. This however did not prevent the LPNM from issuing an announcement on the event. In an Arabic-language post on its official Facebook page, the movement on January 18 published an eight-point statement addressing the actual, in-country problems Libya is experiencing and the ineffectiveness and ill-informedness of the solutions that the Geneva talks try to provide, saying:

1.
In order to achieve the goals and ambitions as aimed for at the Geneva talks, meaning freedom and stability, the reconstruction of the state institutions and the law, the presence of all political parties, social forces, tribes and human rights organizations is required, as well as various political visions. At the Geneva dialogue, no opposition to the so-called February 17 revolution was present. The success of the talks depend on the majority of the Libyan people, which include:
1. Political organizations opposed to the so-called February 17 revolution and its results;
2. Representatives of the tribes and the Libyan cities.
3. Humanitarian organizations, civil society organizations and organizations concerned with refugees, displaced persons, prisoners and missing persons.
4. Independent national figures known for their patriotism and neutrality, whose participation in this dialogue we consider to be a key to success.

2.
We acknowledged there was no clear basis and no regulations for the Geneva talks; on the contrary, they merely serve the principles of the so-called February 17 revolution. First of all the interlocutors should reach a consensus on which strategy should be pursued towards the restoration of security and stability, the rebuilding of the state institutions and the defeat of the widespread terrorism throughout Libya. It is very important that the interlocutors agree on this before engaging in dialogue. The basis of dialogue is a united, independent Libya and the Libyan people's right to security, stability and self-determination and to freely choose the political system of their choice.

3.
Before thinking about any operational or political mechanisms, this dialogue should provide radical solutions leading to a ceasefire, the withdrawal of weapons and the withdrawal of the militants. It should bring all armed actions in the country to an end, because no effective political process will succeed as long as there is no control over the arms and over the formal institutions of the country.

4.
There should be consensus about all operational regulations. The problem of the militias should be addressed in a way that avoids their crimes being left unpunished, as they are crimes against the nation and its citizens. Impunity would undermine security and stability in any future opportunity.

5.
The internationally recognized Libyan parliament is elected by a small part of the Libyan people, yet it is the body entrusted with the legislation and formation of the government and all judicial and executive institutions. There should be a united government which should repeal all legislation that has led to congestion, which was imposed by force of arms on the former General National Congress, such as the Political Isolation law, the law of Transitional Justice and the law of Custody.

6.
It is impossible to create a positive political climate while tens of thousands of people are detained in secret or public prisons outside the authority of the state, and with thousands of missing persons. There is an urgent need for interlocutors to take urgent decisions to put an end to the unjust imprisonment and kidnapping. All hostages and unlawfully detained prisoners should be released, and the judiciary should take lawful and just actions regarding all parties.

7.
After the culmination of all of these procedures and after confidence building between all parties by consensus to form a national unity government in which all parties are represented in a balanced manner, a period of dialogue should be installed in order to return stability, so that the government can proceed with its tasks. The most important tasks should be the compliance management among all parties in accordance with a constitution that meets the aspirations of the Libyan people for freedom, democracy, justice and equality. The unity government should reorganize and restructure the military, the security bodies and the police institutions. It should broadcast and handle all grievances and reparations on a broad cross-section of citizens over the past years and deal with economic problems and issues of basic services to citizens throughout the country, and should culminate the political process permanently and for everyone.

8.
There should be a notice of motion to the head of the United Nations mission to become aware of the urgent need of a national unity government, without the before mentioned limited dialogue with only the pro-February 17 factions. The head of the United Nations mission should be told that the continuation of this methodology will likely lead to sliding into chaos and all-out civil war, which could be avoided if dialogue includes all political factions, so that solutions could be gradually and carefully implemented on the basis of consensus.

Taking into account that almost two million Libyans - one-third of the population - marched in support of the Jamahiriya on July 1, 2011 alone while NATO was unsuccessfully trying to bomb its rebels into power for already almost four months, those millions who currently largely live in exile and who now have reorganized themselves in the Libyan Popular National Movement, most certainly should not be excluded from any real political solution in the country. However, the UN last Friday announced that the talks "will resume on Monday, representatives of influential municipalities will hold discussions on Wednesday and armed militias will enter the talks next Friday." With the dialogue being limited again to rival groups that emerged from the so-called February 17 revolution and without a clear plan on the table, all that can be expected from the upcoming talks is further disunity, leading to more chaos, more division and more bloodshed in the once most prosperous country of Africa.

And maybe that was the plan all along. Just like Libya was bombed into the stone age under the guise of protecting civilians, lofty-sounding peace talks hosted by the UN will ultimately only contribute to the division of Libya in three parts, so that the West can gain total control over these geographically and politically weak regions, like the former spokesperson of the Jamahiriya, dr. Moussa Ibrahim, said earlier this month. A strong, united and independent Libya as it was under Gaddafi is the last thing the West wants to see, so let's not fall in the pro-peace trap again.