During a historic event last Monday at the Committee Rooms Houses of Parliament, Westminster, London, dr. Moussa Ibrahim, the main media spokesperson of the Libyan Jamahiriya government at the time of the NATO aggression in 2011, spoke publicly in English for the first time after the so-called fall of Tripoli. Dr. Ibrahim, who is still wanted by the NATO powers for committing the "crime" of eloquently defending the truth about the imperialist war on Libya to the international press, joined the event called "Libya: NATO's untold story"  via video link. 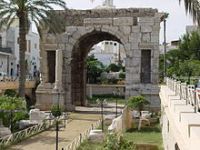 "This is a political and moral appeal to each and every one of you", Dr. Ibrahim started his speech. "I address your hearts and minds."

Dr. Ibrahim declared he also spoke on behalf of the Libyan Popular National Movement, which was founded in early 2012 as the political body of the majority of Libyans who support the Jamahiriya, and whose founding declaration can be found here. "We are Green Libyans, we support Brother Leader Muammar Gaddafi, and we make a peaceful initiative to reclaim our country from Al Qaeda and NATO's gangs", he said.

The illegal war on Libya was a full blown media war, Dr. Ibrahim stressed. Throughout the conflict, the racist lie of Black African mercenaries was used to demonize the Jamahiriya. "But not a single African soldier was captured during eight months of war." Meanwhile NATO's rebel terrorists were eager to pose with darker skinned Libyans whom they forced to eat the green flag of the Libyan Jamahiriya.

Other media lies included the "10,000 peaceful protesters who were killed by Gaddafi's forces", which was the basis of UNSC Resolution 1970 and 1973 and of U.S. President Obama's hypocritical statement that "if we had waited one more day, Benghazi, a city nearly the size of Charlotte, could suffer a massacre that would have reverberated across the region and stained the conscience of the world." However, dr. Ibrahim emphasized, "even [former chairman of the NATO-rebels' National Transitional Council] Mustafa Abdul Jalil admitted that only eight protesters were killed before the NATO intervention, not 10,000."

"Libya was the main member of the African Union and the main power behind Arab unity", dr. Ibrahim said. "The West knew Gaddafi would not slow down his efforts to unite Africa and the Arab world. France even asked Libya to stop a project for a united African currency, calling it "destabilizing". Now their ultimate goal is to split up Libya in three parts, so that they can totally control these geographically and politically weak regions."

In a quick reference to last week's terrorist attacks in France, dr. Ibrahim said he read several Arabic-language reports saying that the Paris terrorists, who last summer returned from Syria, may have visited Libya and may have received training in Libya, which certainly could be the case as many foreign fighters left Libya for Syria during mid-2012.

Dr. Ibrahim ended his address by pointing out that there are currently two million Libyans, meaning one third of the population, living in exile, often under appalling conditions. "But we are not just crying over Libya. We have the tools to solve this crisis, based on national dialogue in which all Libyans are included. I cannot claim this is going smoothly, but I believe that Green Libya will prevail."

In October 2012, dr. Ibrahim refuted reports of the Libyan prime minister's media office on his capture in Libya by saying in an audio message that he is not even in the country. He said those reports were an attempt to distract people from the Libyan regime's crimes in the city of Bani Walid.  Libya's Deputy Prime Minister, Mustafa Abushagur, subsequently apologized on Twitter for reporting the news of dr. Ibrahim's capture. Ibrahims younger brother, 25-year-old Hassan, however was assassinated by a British Apache gunship in Zawiya during the third week of August 2011.

The "Libya: NATO's untold story" event was hosted by journalist, broadcaster and political analyst Hafsa Kara-Mustapha. Other speakers at the event were dr. Mabruk Derbash, professor at Tripoli university and political commentator, who stated that he opposed Gaddafi on many issues, but now wished that "the problems of the Jamahiriya returned, as compared to what Libya has become, they were hardly problems at all", and Sukant Chandan, coordinator at the Tricontinental Anti-Imperialist Platform and political analyst who reported from Libya three times during the NATO aggression in 2011.

"We are so colonized that we don't want to listen to the Libyan people, or to revolutionary leaders like Chavez and [Fidel] Castro", the latter pointed out. This also turned out to apply to a few pro-NATO attenders of the event who could not wait to put dr. Ibrahims words out of context on social media. "Mussa ibrahim: asks if the room has only libyans or even foreign journalists ? He probably would put the lying mode" Twitter user @Tajourian wrote, conveniently leaving out dr. Ibrahims addition that he would like to know this because of geographical indications in his speech that might need explanation for non-Libyans.
Many others did value the historic speech of dr. Ibrahim. "Moussa Ibrahim true Libyan hero and patriot !!!!", an exiled Libyan posted on Twitter.

A video of the event will be available on YouTube on the Tricontinental channel soon.