Why General Haftar is not Colonel Gaddafi

The name of man who claims to be on a mission to drive out "Islamists and terrorists" from Libya, was mentioned as early as February 22, 2011 - only five days after the start of the NATO-led rebellion against the Jamahiriya - as the possible leader of "post-Gaddafi Libya". And not without reason. 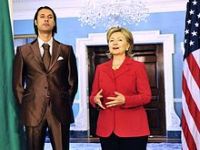 The main purpose in the life of General Khalifa Belqasim Haftar was to feed and express his grudge towards the leader of the Libyan Al-Fatah revolution. Once part of the Free Officers Movement that overthrew the corrupt regime of King Idris and its Western imperialist supporters, Haftar betrayed the revolution in the 1980s, when he cut a deal with anti-Gaddafi forces in the neighbouring country of Chad during the Chadian-Libyan conflict. In exchange for being freed from the Chadian prison that kept him locked up with about 600 other Libyan fighters, he vowed to set up the anti-Gaddafi Libyan National Army (LNA). This army was founded on June 21, 1988 - but not without the vast support of the U.S. Central Intelligence Agency (CIA), under the approval of then president Ronald Reagan, who had bombed the Libyan capital of Tripoli two years earlier in an attempt to kill the Gaddafi family.

According to a New York Times report from 1991, the U.S. by then offered a home to 350 Libyan soldiers who plotted to overthrow Gaddafi. Haftar is believed to be one of them. The Benghazi native started to live with his family in the town of Falls Church in suburban Virginia - just a few miles away from the CIA's headquarters in Langley - for the next twenty years. In that period Haftar was pursuing LNA activities from the U.S. He returned to Libya in early 2011. On the eve of NATO's bombing campaign against the North-African country, Haftar was appointed chief rebel commander on March 17, 2011.

The former Free Officer with a U.S. passport, who lately made headlines after launching an attack in Benghazi on May 16 and two days later in Tripoli, thus isn't exactly new to the scene. By now Haftar and his well-equiped brigades can even count on the support of former prime minister - and former skeptic - Ali Zeidan, who from his refuge in Europe declared that Haftar's "Operation Dignity" (sic) is contributing to the Libyan army's war on terrorism. It was after this expression of support that comparisons with Muammar Gaddafi started to be made. In a remarkable twist of logic, the media began to brand Haftar as a modern day Gaddafi who seeks to eradicate the country of what he believes is corrupt, dangerous and terrorist. His call for the suspension of the NATO-backed Libyan interim parliament on February 14 this year was compared to the Free Officers Movement's revolution of September 1, 1969. There were even voices saying that this was the long awaited answer of the so-called Green Resistence - the Libyans loyal to the Jamahiriya - to the 2011 NATO intervention and its devastating results.

In order to understand exactly what is going on with general Haftar and his "Operation Dignity" in relation to colonel Gaddafi and the 1969 Al-Fateh revolution, let's first of all take a look at what is not going on. Contrary to the events on September 1, 1969 and the days after, Haftar's operation has been far from bloodless. On May 17 alone, nearly 80 were killed in clashes between Haftar loyalists and a number of the militias that control various parts of Libya. But way more significant is the fact that Gaddafi and the Free Officers Movement enjoyed the overwhelming support of the Libyan people. The Haftar supporters come from quite a different field. Among them is French philosopher Bernard-Henri Lévy who applauded the NATO bombing of Libya. His main supporters however seem to be the mainstream journalists and their clients who are eager to report on Haftar's alleged popularity among the Libyan people. "We are now fighting not only on behalf of Libya, but on behalf of the whole world", the New York Times quotes him saying on May 29. Strangely enough, the Libyan people themselves are remaining silent.

In fact they are not. It is the media that remains silent on the voices of the Libyans regarding Haftar. When current U.S. ambassador to Libya, Mrs Deborah Jones, said in a (mis)statement on May 21 that Libya is a strategic goldmine for the West, and that Libyans are incapable of running their own country, the Great Libyan Tribes, who represent 98% of the Libyans worldwide, thought it was about time to speak out in response. In a three page open letter the Tribes explained that their best days were the 42 years under Gaddafi. As for general Haftar, they declared:

"The USA planned to overthrow the legitimate Libyan government in 1980 and hired a traitor Libyan military officer named Khalifa Haftar, trained him and several thousands mercenaries to destroy the Gaddafi government. The change of government in Chad made the USA stop that planned overthrow. Haftar and his band of traitors were moved to the USA near Langley Virginia where Haftar et al worked for the CIA for 20 years." [...] "You [ambassador Jones] talk as if you do not know General Haftar, when in fact he is the selected military front for the USA-CIA military division in Libya. He receives all his orders from Langley Virginia as do you. In fact, Haftar took refuge in the US embassy in February of this year when his first coup attempt failed. Has the USA not done enough damage to our country?"

So what are we really dealing with here? Clearly not with a Gaddafi-like figure who aims to free his country from foreign occupiers and their mercenary puppets, and make it as prosperous as it was before the 2011 war. General Haftar is nothing but the West's answer to their self-created chaos. This is a well-known strategy used by the imperialist powers all over the world for years now. Three years after the NATO war, Libya obviously has not become the free democratic state that according to the West would sprout from the destructive bombing raids. In other words, the lofty but naive promises of freedom made by the U.S. and the NATO countries in an attempt to justify their aggression, have failed loud and clear.

The West has failed to install a stable puppet regime in Libya and people worldwide have grown aware of this, as well as of the true nature of the "Libyan rebels" who were branded freedom fighters back in 2011. Yet the West has no choice but to rebrand the mercenaries of its own creation from freedom fighters to terrorists and Islamist extremists, and to subsequently put forward a more convincing proxy from the same stable, in order to proceed with their strategy of divide-and-conquer. Once again the snake is biting its own tail.