Unsuccessful offensive is the last clear chance for Kiev 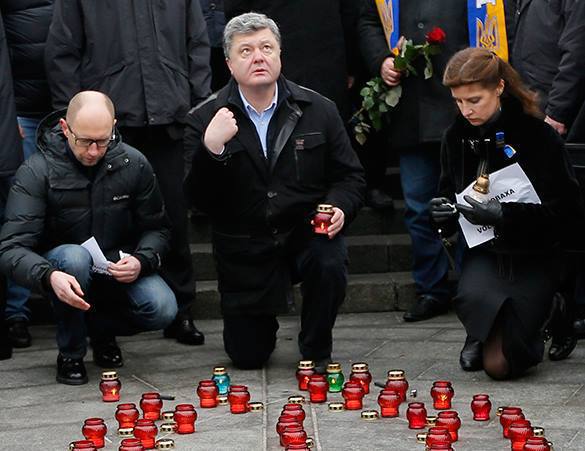 Pro-American Kiev has launched an offensive in the east of the country with a provocation in Donetsk airport, then switched to bombings and tank attacks of the city. Foreign Minister of the Russian Federation Sergey Lavrov had warned of a military operation under preparation. Why did Poroshenko promise to restore the "Ukrainian heritage" in Donbass realizing that it is impossible? It is his last chance of survival.

Poroshenko and "restoring the Ukrainian heritage" in Donbass

"We will not surrender a bit of Ukrainian soil, we will return Donbass, we will restore the Ukrainian heritage in Donbass. Our unity is key for victory. Today Ukraine is united as never before," President Petro Poroshenko said at a "Peace March" in Kiev on January 18th.

He started "restoring the Ukrainian heritage" with a provocation in Donetsk airport several hours earlier. Ukrainian forces attempted to assault the old terminal occupied by militia, but they were defeated and retreated suffering great losses. As a result of a counterattack, DPR's army has occupied the new terminal rather easily and with minimum casualties, and placed the airport under control.

Then Poroshenko ordered to open a heavy artillery fire on Donetsk. There were air bombings and attempts to break through to the city in tanks that failed. Russia and OSCE called to follow Minsk agreements and pull back heavy equipment from the separation line. However, Ukrainian President has not responded.

Why did Poroshenko launch an offensive? Moreover, such poorly prepared?

According to Russia Today, Executive Director of the Ron Paul Institute for Peace and Prosperity Daniel McAdams thinks that in such a way Poroshenko is hoping to obtain the U.S.'s aid. "We saw just this last week President Poroshenko talked about achieving a military victory in the east. He said, "we will retake Donbass region." He has probably calculated that he has US government's support in this move." If you remember back at the end of last year, the Ukraine Freedom Support Act was passed by Congress and signed by the president.

Remember there is $350 million in that bill stating that it is US policy to assist the government of Ukraine in restoring its sovereignty and territorial integrity. That's why Ukrainian authorities might have decided that America would support them," the export told RT.

Indeed, the American media is promoting to extend military assistance to Ukraine in every possible way, not only Republican congressmen are talking about it but Democrats as well. Therefore, a war, as odd as it may seem a very unsuccessful one, is a way to survive for impoverished Kiev.

Ukraine started a new war with a "Peace March"

Besides, Ukraine's credit rating has been recently revised downwards due to late payments to the International Monetary Fund and deterioration in foreign exchange reserves. Ukraine is about to declare a debt default. In such circumstances, only unsuccessful war can force the West to render assistance to Kiev. If Washington is led to believe that "all is lost" and Russia is winning, only then they will probably pass from words to deeds. If you will, that is a small game by Poroshenko in a large play jointly with Obama.

Conclusion of peace in Donbass is equivalent to surrender for Ukraine

According to a French specialist on Russian law Karine Bechet-Golovko, as reported by RIA Novosti, conclusion of peace in Donbass would be equivalent to surrender for Ukraine that will not be acceptable for either Kiev authorities or those providing funding.

"It is clear that Ukraine came to a standstill because it was not able to resolve the situation in Donbass by military actions, it can not win, at that it is not in a position to discuss the political and diplomatic surrender, since it is not the goal its sponsors launched Maidan for," Bechet-Golovko writes. According to her, Donbass is used as a leverage that "must draw Russia into the war". It should be added that it is possibly Americans' condition for Poroshenko under which certain military and financial assistance was promised.

However, at the current level of communications and internet it is impossible to hide true intentions of the "West-Kiev" coalition. Even such Russophobic organization as Human Rights Watch can no longer hide the fact that Ukrainian security forces throw unaimed fire on peaceful cities of Donbass, absolutely ignoring aftermath of such fire. For the world community it becomes clearer that Kiev does not take any measures to settle the conflict.

So what result do we have as of Tuesday January 20th? The offensive of the Ukrainian army resulted in securing of Peski village by militia forces, attack on Avdeevka, Debaltsevo, Mariupol, there are also battles in LPR. DPR's leaders have repeatedly stated their plans to place Mariupol under control which almost clears the direct road to Crimea.

This night an offer to cease fire in two days appeared on the website of the Ukrainian Ministry of Internal Affairs. Pull back heavy equipment in 5 days. Ensure separation along the line as of November 13th in 21 days. The offer is yet again addressed to Moscow.

It seems that it is necessary to seize the moment and do not respond while Kiev discusses this matter directly with the "separatists", Sergey Markov, Pro-Rector of the Plekhanov Russian University for Economics, member of the Civic Chamber of the Russian Federation, wrote in his blog. The political analyst also offered "not to stop the offensive and free villages, Schastye, Debaltsevo, Mariupol, Slavyansk, Kramatorsk, and demand demarcation of forces not along the line as of November 13th, but along the line of new cease-fire". Announce that Minsk agreements have been disrupted by Kiev, hold new negotiations and achieve new agreements that will specify new demarcation lines for military forces. Furthermore, at least within the borders of former Donetsk and Luhansk Regions.

Washington will probably have minimum time to come down with money and prevent the offensive from carrying forward. We will find out soon enough if Obama decides to go for it.