Another piece in The Washington Post, another pile of Russophobic hogwash from beginning to end, another insubstantial and hysterical squeak from one of its correspondents, this time ruing the day when the USA did not expand NATO eastwards earlier and claiming there was never any promise not to do so. And now for the truth... 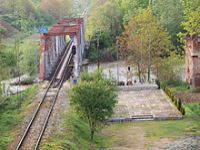 When I was told yesterday that Anne Applebaum is at it again, I did not need to use much imagination to figure out what she had been saying this time around. And predictably, here it is, in what The Washington Post these days probably terms an opinion-editorial piece, called "The myth of Russian humiliation", printed on October 17, author, the columnist Anne Applebaum. The whole focus of the piece is (violins) how Central and Eastern Europe have enjoyed peace and prosperity while NATO expanded eastwards, and how NATO had every right to do so, because, I quote, "For the record: No treaties prohibiting NATO expansion were ever signed with Russia. No promises were broken". (crescendo) And so, why didn't NATO do so earlier, especially when one takes into account, and (drumbeat) I quote, "military invasions of Georgia and now Ukraine"... "exactly as the Central Europeans feared" and Russia's "military spending" (stop violins).

This sort of Russophobic hogwash is exactly what we would expect from what has become just another MainStream Media outlet, an instrument in manipulation and brainwashing through control of fear, selling an "us" and "them" approach to justify the "us", in fact preparing the ground for public opinion to support the Machiavellian mechanisms of the lobbies which pull the strings of the political policy-makers. And it is this sort of pig-headed arrogance which has landed our world in the state it is in today.

This time, there are two clear "clangers" in Anne Applebaum's piece, where there used to be only one. The first is the focus on Russia's military spending. Well, if on a planetary scale, one point seven trillion USD are spent on military budgets, and if NATO itself makes up for one point two trillion USD of that, each and every year, then Russia, not belonging to NATO, makes part of the zero point five trillion USD, along with the rest of the world. So as is the case with most of what the MainStream Media states these days, follow the rule, i.e. turn what is written on its head, turn it inside out and back to front and you get somewhere near the truth. The word for such an approach, in plain English, is bullshit!

The second is the precept that NATO signed no treaties with Russia on its expansion and therefore no promises were broken. Esmeralda is a duck, all ducks can fly, therefore Esmeralda can fly. Where do they get them from these days? For a start, promises were indeed given to Russia and secondly, there is something called honoring your word. Not where NATO is concerned, it would appear.

On February 8, 1990 US Secretary of State James Baker met his Soviet counterpart, Eduard Shevardnadze, in Moscow, and gave the following assurance: NATO's jurisdiction or forces would not move eastwards if all of Germany were included in NATO, and this would also apply to the territory of the German Democratic Republic.

Jack Matlock, US Ambassador to the Soviet Union, has stated that a "clear commitment" was given by the West that NATO would not expand. This is backed up by declassified documents which gave Soviet negotiators the impression and assurance that NATO would not move into Czechoslovakia, Hungary or Poland.

Mikhail Gorbachev himself wrote that "they gave assurances that NATO would not extend its zone of operation to the east".

The transcript of the meeting between Gorbachev and the Chancellor of the German Federal Republic, Helmut Kohl, in February 1990 shows that Kohl stated " NATO must not expend the sphere of its activity".

On May 9, there was another meeting between Baker and Gorbachev, in which Baker stated "there would be no extension of NATO's jurisdiction or NATO's forces one inch to the East" and "We believe that the consultations and discussions in the framework of the 2 plus 4 mechanism must give a guarantee that the unification of Germany does not lead to the extension of NATO's military organization to the East". If these are not promises and commitments, it is difficult to imagine what are.

So, we have Anne Applebaum's opinion that no promises were broken, against the likes of James Baker, Mikhail Gorbachev and Jack Matlock. One wonders where The Washington Post stands.

But this is hardly surprising when we examine how NATO operates. For instance, after supporting Albanian terrorists in Kosovo, the Ushtria Çlirimtare ë Kosovës (KLA), after kidnapping President Milosevic outside any law in force in the Federal Republic of Serbia or the FR Yugoslavia, NATO performed the murderous and illegal acts of repeated war crimes in Iraq, insulting the UN Charter, breaching international law, breaching the terms of the Geneva Conventions, setting up prison and torture camps across the globe, including allegedly in Anne Applebaum's beloved Central Europe, sodomizing prisoners, urinating in food, forcing Moslems to eat pork, performing acts of sexual depravity and perversion. If that is what Anne Applebaum and The Washington Post defend, I for one do not.

And speaking of NATO's "word", what about the spectacular mission creep in Libya, where boots on the ground constituted a direct breach of UNSC Resolutions 1970 and 1973 (2011), and where NATO used terrorists on its own list of proscribed groups to destroy a sovereign State. Google up Law Case of the Century, my indictment of NATO which was not even acknowledged by the International Criminal Court or the ECHR. (**). So as if this wasn't enough to see where the putrid heart and reptilian soul of NATO lie, how about cavorting with terrorists again in Syria and using an event in which the terrorists used chemical weapons against the Syrian Government troops for NATO to enter the region, set up a supply line for Qatari natural gas and bypass Russia? This is what it is about, is it not?

The war crimes and crimes against humanity committed by NATO are well documented, however much cyber attacking goes on behind the scenes. What is even more unacceptable, however, is claiming NATO is a peaceful and defensive organization, as Applebaum does, and then trying to blame Russia for "invasions" in Georgia and Ukraine.

True, the MainStream Media at the time tried to show the Georgian War in 2008 as one of Russia's making, and we even saw TV channels showing Georgian missiles firing northwards, reported as Russian missiles firing southwards, yet it soon became clear that Georgia committed the first act of aggression and Russia limited itself to a very light raid to re-establish the status quo.

What Applebaum and The Washington Post seem to be unaware of is the fact that under the Soviet Constitution, the dissolution of the Union was catered for under clauses which guaranteed the rights of minorities and provided these with the right to a Referendum. Georgia failed to hold this, Russia did and the South Ossetians and Abkhazians decided to join Russia. Because they're Russians. Russia did not invade, Georgia did and in my opinion was lucky Russia reacted with such a restrained and measured response.

As for Ukraine, those who apply a tailored time line to such a conflict are obviously intellectually challenged. The entire sorry episode started when an illegal coup took place in Kiev in February, ousted the democratically elected President (Yanukovich) in the absence of any of the three existing norms for so doing, amid calls for the slaughter of Russians and Jews on the streets of Kiev, anti-Russian edicts from the Ukrainian Rada (Parliament, you know, that place where you can see fisticuffs for free), and Fascist massacres in Odessa, Mariupol and elsewhere, with crowds of pro-West Ukrainians jeering and cheering as burning bodies fell out of windows. If Anne Applebaum and The Washington Post find that kosher, I do not.

So, with the existing legal entity - the President - removed, the legal entity with decision-making powers in Crimea became its Parliament, and this voted for a referendum on return to Russia or not. The people voted. It's called Democracy. So how could Russia invade itself? As regards the rest of Ukraine, the South-East took up arms as a reaction to the Fascist Putsch and the Fascist massacres. These people are Russian-speaking, but Ukrainians. If Russia had been involved, the entire conflict would have reached Kiev within 48 hours and that would have been the end of it.

So, it is very difficult to understand the logic of Anne Applebaum's piece, yet again. What is surprising is the apparent naivety with which The Washington Post publishes such belligerent and jingoistic nonsense and expects people to take the publication seriously.

True, Applebaum did win a Pulitzer Prize... once... but then again Obama won a Nobel Peace Prize, and look what happened.

It is a pity that neither Applebaum, apparently, nor The Washington Post, nor Obama appear to realize that the world has moved on. A growing percentage of people are choosing not to have a TV set dominating their living room spewing out pro-NATO bilge 24/7, a growing number of people are moving away from the MainStream Media, calling it the "bought" or "compromised" media and are moving on to alternative sources to find some real news.

Rather than spread hatred and loathing, why don't Anne Pulitzer Prizewinner Applebaum, Barack Nobel Peace Prizewinner Obama and The Washington Post try to stop blowing up bridges and find common ground? Because like their friend NATO, that's what they do.

Photo: Monument to NATO terrorist strike against a civilian train in 1999, in Serbia.