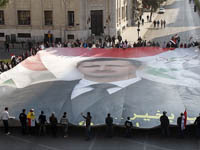 The situation in Syria and around it is becoming increasingly volatile. Following the sanctions imposed by the U.S., EU, Turkey and the League of Arab States (LAS), the armed detachments of mercenaries from Libya have been put to use. The troops of the former Libyan rebels are ready to join the armed rebels of the "Free Syrian Army."

On November 29 Arabic website "Al-Rai Al-Arabi" reported that some 600 Libyan volunteers, who want to participate in the overthrow of President Bashar al-Assad, came to Syria through Turkey. The site indicated a representative of the current leadership of Libya as its source. Strictly speaking, this can hardly be surprising. The current Transitional National Council (TNC) first recognized the Syrian National Council as "the sole legitimate representative" of the Syrian people.

The "Free Syrian Army" in some way is a clone of the Libyan rebels. It was formed in the border areas with Turkey by the Syrian army defectors. They had frequent clashes with the government forces. Last week, they attacked the buildings of the Air Force of the Syrian Intelligence but were unable to seize them. According to some reports, Turkey and Libya have already had a series of talks on the supply of Syrian rebels and volunteers with arms. Now it seems that the first "well-wishers" from Libya have arrived.

The emergence of volunteers alone says that the force scenario of overthrowing the current leadership of Syria is quite likely. How the events in the country will develop? A military expert and director of the Center for Military Forecasting Anatoly Tsyganok talked about it in an interview with "Pravda.Ru".

"The first possible scenario is that the army will restore order as it happened in Egypt. Who, indeed, the Syrian government would negotiate with? It will not negotiate with the so-called Transitional Council sitting in Istanbul. Incidentally, in Syria nearly fifteen hundred policemen were killed in clashes with al-Assad opposition. Why does the West not mention this?

The second scenario is that of force. Either Saudi Arabia or NATO would inflict blows at Syria. If this happens, most likely, it will be Saudi Arabia.

For Turkey that seems to be at the vanguard of the opponents of Assad the force scenario is not advantageous. If it happens, its territory will be flooded by thousands of refugees, including ethnic Kurds who could destabilize the situation in Turkey. There is also Israel that fought with Syria four times. Today, however, there is peace in the disputed Golan Heights. For Israel the most important thing is the absence of threats. For example, the weapon from the war-torn Libya quickly reached the Gaza Strip. Israel does not need this war.

The third scenario assumes interference of Iran with which Bashar al-Assad signed a treaty of mutual assistance in 2009. Units of the Islamic Revolution Guards Corps (IRGC) can be transferred to Syria. If Iran loses Syria, the probability of attack at Iran by NATO would drastically increase.

In addition, in the event of the forceful resolution the current Syrian leadership will be able to hide in the areas populated by the Alawite on the border with Turkey and establish a new Alawite government there."

So far force scenarios against Syria are not officially discussed in the West. However, the decision to bomb Yugoslavia, Iraq or Libya, too, was not made overnight. In all cases first there were sanctions and numerous reports of human rights violations prepared by human rights defenders. The last paper of this kind was published by the International Independent Commission of Experts on human rights.

"A considerable amount of evidence collected by the Commission indicates that these egregious human rights violations were committed by Syrian military and security forces since the beginning of the protests in March of 2011," the committee members noted in their report. Its head Paulo Pinheiro argues that its members have established the facts of executions, arbitrary arrests, kidnappings, torture and sexual violence. Syrian security forces could have killed 3.5 thousand people. However, the committee members had not visited Syria.

However, even in the West not everyone believed another portion of data demonizing Bashar al-Assad. A French journalist and political analyst Thierry Meyssan who at some point expressed doubts about the official theory of terrorist attacks on September 11, 2001 in the United States, accused the authors of the report of forgery. He pointed out that the above information is based on the data from a human rights organization Observatoire syrien des Droits de l'homme (OSDH), whose office is located in London. He also indicated that many of those who enlisted as dead are actually alive.

Unlike the authors of the report, Meyssan traveled to Syria. According to him, there is much violence provoked by mercenaries from Iraq, Yemen, Pakistan, Afghanistan and Chechnya, and the Qatari television station "Al Jazeera broadcasts staged footage. "We have met with the survivors and saw mutilated bodies in morgues and hospitals. Most of the victims are military, not civilians, which once again suggests that this is not about political repression against the civilian population by the authorities", said Meyssan.

Strictly speaking, the opponents of the current Syrian government and the Western media that replicated their information have been often accused of fraud. 18-year- old Zainab Al-Hosni allegedly killed for the opposition activities of her brother "resurrected", saying that she just ran away from home. A blog allegedly written by some oppressed Syrian lesbian was created by a resident of Scotland.

But the Western media prefer to ignore their own faults and continue to attack the president of Syria. The British newspaper The Financial Times recently wrote that Arab countries have taken the unprecedented step of imposing sanctions against Syria, strengthening thereby the economic pressure on the regime of Bashar al-Assad. France Press echoed it saying that Human Rights Committee of the UN General Assembly adopted a resolution condemning bloody repression against demonstrators in Syria.

Turkish Weekly wrote that the conflict in Syria continues between the Assad regime and dissidents. While the situation is still gloomy, methods of suppression of popular unrest based on force increase the instability of Assad regime.

The clouds are gathering over Syria each day. LAS imposed economic sanctions on the country. Turkey threatens to cut off electricity and stop using Syrian territory for transit trade. The U.S. and the EU issue new threatening statements. The campaign of attacks on al-Assad in Western and Turkish media outlets has been ongoing for several months. Now the country has to deal with the mercenaries sent from Libya.