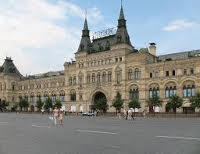 A large scandal is brewing in Moscow. A woman visited a cafe in Moscow's GUM luxury department store on Red Square. She bought a bottle of mineral water and was soon hospitalized with serious burns of her food pipe and larynx. The woman, named as Karina Orlova, a journalist, suffered second and third degree burns after she drank some water from a bottle of Bon Aqua. It turned out that there was acid in the bottle instead of water.

The woman has been transferred from the intensive care unit of Moscow's Sklifosovsky Institute of Emergency Care to a common ward.

"I was in a cafe with my mother yesterday. To be more precise, we were at GUM and decided to have a cup of coffee on the second storey. We ordered coffee, some snacks and a bottle of Bon Aqua water. As far as I can remember, the bottle was closed, but it was not industrially sealed, you know, it opened without a click. I opened it and filled two glasses. When filling the glasses, I noticed that the water was somewhat sticky and oily, but I didn't pay attention to it. The next moment I took a gulp," the woman said.

"The water burned me immediately, I started suffocating. I realized that they poisoned me with something. It was very scary because I did not know what it was and how I could get that out of me. I spit all out, fell on the floor and started screaming, it was very scary. It was some sort of acid," the journalist told Kommersant FM radio station.

The ER vehicle arrived in quite a while, because there was no place for parking outside. The bottle with the liquid has been sent for analysis; a criminal case will be filed accordingly.

The woman bought the bottle at Illy Cafe on the second storey of the department store, RusNovosti news agency reports. The cafe has not been closed and continues working. Employees of the cafe said that they did not know anything about the incident.

Spokespeople for Coca-Cola Corporation, which owns Bon Aqua brand, said they did not have any information about the incident, nor did they receive any complaints. Each bottle of water, they said, contains a special code indicating the place and time of production of each bottle. A customer can call the hotline indicated on the bottle and report the incident together with the code. In this case, the company will be able to recall a doubtful batch of water.

The director of the cafe, Suren Mitskhajan, told RusNovosti that his firm was not guilty of what happened because he only supplies coffee to the cafe. All other foods and drinks are supplied by other organizations.

The analysis of the liquid showed that there was alkali in the bottle. Police officers also said that the bottle did not look like other Bon Aqua bottles, so it could be a counterfeit product.