Everyday Saints and other stories

Sometimes you come across books with an appearance simple and almost harmless. Their title perhaps suggests you a content already read or known, so that nothing new can stimulate the interest and imagination of the reader. Indeed, quite the opposite: some titles make you want to leave there a book that you think will be boring and sleepy, a book that cannot impress you reader or teach you a lot. I must confess that if it was not for an article by Maurizio Blondet I would have never picked up Everyday Saints and other stories, I would never have read it amazed a first time, I would never have set it aside and re-read it a second and at the end I would never tried to write an article that talked about it. 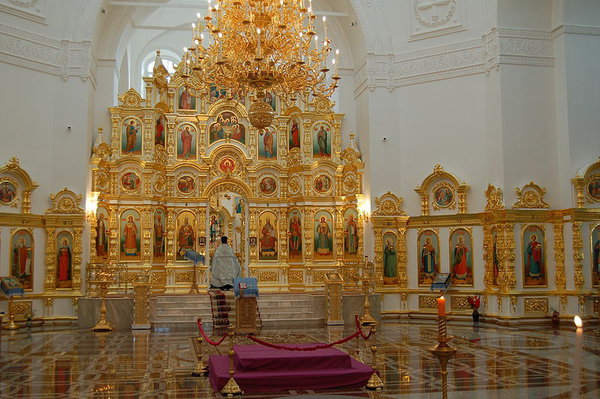 That of Archimandrite Tikhon (born Georgy Ševkunov) was a great publishing success in Russia in 2011 and behind the title that may mislead the astute reader, accustomed to handling books, there is a little treasure of teachings about the love of God and that for our fellows.

Tikhon's experience as a monk

Tikhon talks to us about his experience as Orthodox monk, about his vocation born in Moscow of the '80s, long before Gorbachev and his perestrojka, when the Communist Party and the Soviet Union seemed destined to last for the centuries yet to come, and not to collapse a few years later, disappearing in the evolution of History. He accompanies us throughout all the book talking about himself, his weaknesses, his mistakes and some of his success, but remaining in some way in the background, narrative trait d'union of the real characters in the book: his spiritual fathers in the Monastery of the Pskov's Caves, his friends and fellow monks, the life stories of ordinary people who addressed and addresses the Orthodox Church for help, comfort, consolation, even when the communism reigned powerful.

Becoming a priest or a monk in the Soviet Union invariably meant to meet a lot of trouble: parasites, obscurantist, linked to an irrational past were the most common allegations that they felt ask those people, men and women, who thought of having to answer a higher call  and to which they did not want to give up.

Insane good for a psychiatric hospital, agitators, enemy agents guilty of anti-Soviet activities: they could find opened the doors of the asylum as those of the gulag, without distinction. Always ended questioned by party officials, by the police, by the KGB agents during questionings from which they could go out with all the fingers broken or worse.

But God does not love the vile, so teach the abbot Alipij and for this reason he always worked to defend the monastery of Pskov during the years of Khrushchev's persecution and even later, when the Communist Party wanted to close that place and clear it forever. The namestnik Alipij and Gavriil opposed peacefully but with superhuman firmness to the Moscow authorities in defense of this sacred place. They, as well as many of the monks, had in fact already risked their lives in the war against the Nazis and had taken their vows at the end of the conflict. They had therefore already experienced an enormous and frightening danger and with it the fear for their lives, they had already experienced the hunger and the privations of wartime, fatigue and despair. That is, they were men forged by the severity of life, in a time when living was hard but instead perishing was easy.

As the reader turns out reading the book, despite churches and monasteries destroyed or converted into factories and warehouses, despite the threats, the beatings, the hostile invasiveness of the Communist Party, the Russian Orthodox Church continued to exist, in her two forms one public and the other hidden. There was not only the official Church, who daily suffered at the hands of the Communist Party and that was apparently destined to disappear finding confined in a few monasteries and churches used by the party the same way as reserves or zoos, but there was also a Church clandestine and secret. In cities, large or small, there were men and women who apparently were engaged in their daily work recognized by the Soviet society, but in fact they were monks and nuns who lived in hiding their vocation. The mountains of Abkhazia hosted for decades monks and nuns who lived in solitude as eremites and ascetics, looking poor mountaineers dull and lonely at the eyes of the world when in fact they were educated and sensitive people, daily devoted to God. They lived their vocation hidden right under the eyes of the Communist Party but still in constant danger, in the clandestinely of impervious hermitages who were known to few even among the locals.

In the monastery of Pskov there is a custom: in a monastery chapel, every day, the monks take turns reading the Psalter aloud, doesn't matter there is someone is present to listen or not. Every day of the year, every hour of the day monks in turn read the word of God. And to me, son of the atom's age, has a strange effect to know that this happens: it is as if this unceasing litany, constantly repeated, would spread all around. As if a vital fluid overflowed from its source soaking and enlivening the surrounding land. Here it is intertwined with the fabric of reality, becoming support and lifeblood for it, in opposition to the Evil that in accordance with its obscure deep nature can only bend and pervert.

There are many pictures as compendium of this strange book. Places and landscapes, ordinary people, ordinary priests and venerable monks, some of whom are said to have been even granted with the gift of foresight. Looking at them, they will return a timeless look, sometimes severe, sometimes smiling.

Here are the "wayfarers crazy in Christ", who live a life wandering around the monasteries and churches, last among the last.

Here's batjuska Ioann, Archimandrite Krest'jankin, grieving to tears when his spiritual children do not listen to him, and incur the damage that he had already pre-seen, victims of that same free will of which even God doesn't deprive us.

Here's the starec Dosifej, that finding in his hut thieves in search of his pension as war veteran, says "Take what you want but let me first bless you" and at once they run away in terror without taking anything.

Watching those wrinkled faces, marked by the harshness of life, on bodies bent by age but not by the wickedness of men, you understand why certain Western circles have so hated and still hate the Russian Orthodox Church (and more simply the religion in general) to the point of inventing groups as Femen or Pussy Riot, who desecrated cathedrals and sawn crosses. But you can also understand why those same circles have never had any chance of success. In fact, as taught by Tradition: obedience for obedience, if you obey God, God obeys you. These are not the years in which the filths of all the Soros' of the world can something to blacken and bend the Russian Orthodox Church: they have to make do of having (temporarily) bent the Church of Rome with one of their color revolutions against which an opposition is rising and whose results will soon be reversed.

I want to end with a story dating back to the time of the Desert Fathers and which is also quoted in the book: every night a farmer placed a bowl with some milk under a palm tree, not knowing in his simplicity how else to address his prayer to God. Every morning he found the bowl empty, with joy. A monk knew it and explained that surely some animal drank the milk, but for sure not the Lord God. So they stationed in the evening to watch unseen and they saw that in fact a fox drank the milk in the bowl. The farmer felt himself as a poor fool and returned sad in his hut, prey of discouragement. So did the monk but he found the entrance barred by an angel. On his knees, he felt reproach for his conduct. "But there was really a fox!" cried the monk. The angel of God said resolute to him that yes, there was indeed a fox to drink that milk, that night and all other nights. And yet, the angel continued, there's one thing you do not know in tour wisdom, or wise: God had contemplated the heart of that man welcoming his simplicity and to not grieve him, every night He sent a fox to drink the milk of his offering.