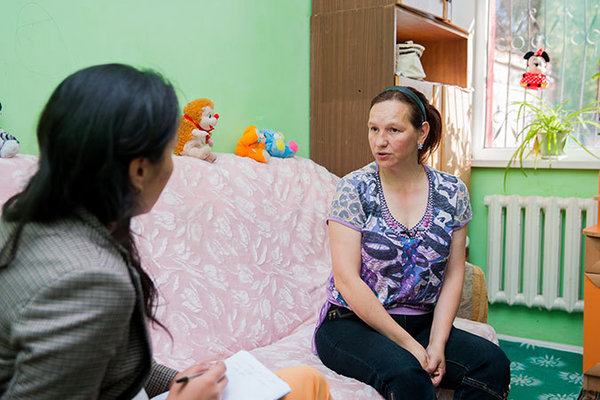 As long as Marina can remember, she has suffered violence. When she was eight, she was repeatedly raped by her two step-brothers. Her mother turned a blind eye.

Marina thought marriage would be her way out.  But her husband was abusive. In 2015, pregnant with her fourth child and with her three-year-old daughter in her arms, Marina came to the My Home Crisis Centre, one of Kazakhstan's 21 non-state domestic violence centres, after her husband beat her mercilessly. Her two other children were sent to an orphanage because she could not afford to take care of all of them.

"When Marina came here, she had no documents," recalls Irina Zhdanova, Director of My Home Crisis Centre. "She didn't know her basic rights, or that she was entitled to child care benefits."

At the Centre, Marina received legal and psychological support and basic health care. She gave birth to a daughter, brought back another daughter from the orphanage and learned about her rights, what to do and where to go if she faced abuse again.

"Here, I have found my calm and freedom. I learned to trust people and be resilient," said Marina.

After getting all her papers in order, including her children's missing birth certificates, with the help of the staff at the crisis centre, Marina is now on the waiting list for a home of her own. She has applied for benefits from the government, enrolled her children in school and started working in a bakery to support herself and her children. She is also taking additional skills training classes offered at My Home.

Since 2013, the My Home Crisis Centre in Temirtau, about 185 km from Astana, the capital of Kazakhstan, has given refuge and support to more than 300 women. "Right now, eight people are staying with us-three women and five children. One woman is pregnant. None of them had any other place to go to," said Zhdanova.

"Violence against women and girls remains a persistent and widespread challenge in Central Asia. Adequate support services for victims are rare. As part of its efforts to prevent and respond to violence against women and girls, UN Women, along with partners, supports initiatives that increase survivors' access to services and  build the capacity of local authorities to implement the law on prevention of domestic violence," explains Elaine M. Conkievich, UN Women Representative Kazakhstan, Tajikistan, Turkmenistan and Uzbekistan.

More than a third of the 341,291 crimes committed in 2014 in Kazakhstan involved violence against women, according the Statistics Committee of the Kazakh Ministry of National Economy. In the first half of 2016, the Ministry of Internal Affairs revealed that 40,000 women had filed reports of violence and more than 3,500 women had been referred to crisis centres.

"Crisis centres are multifunctional spaces that provide comprehensive housing, psychosocial and legal support. They help women stand on their own feet after escaping an abusive situation so that they don't have to go back into that situation. However, these crisis centres are acutely under-funded," said Zulfiya Baysakova, Chairwoman of Kazakhstan's Crisis Centres Union and a member of UN Women's Civil Society Advisory Group.

Kazakhstan has 28 domestic violence crisis centres in total, of which seven are government-backed and only admit survivors after they report their case to the police. While the non-state centres offer free services, anonymity and confidentiality, they are acutely under-financed and overwhelmed with demand. In 2015, Kazakhstan's non-state domestic violence crisis centres received more than 9,000 helpline calls, gave consultations to 8,449 women and placed 592 women in shelters.

On 6 and 7 October, the Union of Crisis Centres held a forum to discuss how to get more financing for non-government domestic violence crisis centres. Co-organized by UN Women, the forum, "Life free from violence in the family as an inviolable right of everyone", convened more than 50 representatives of the Government of the Republic of Kazakhstan, non-state crisis centres, international organizations and other partners. Besides funding, participants also discussed service standards, the role that non-government crisis centres play in the referral system and in preventing domestic violence, and stronger local and regional cooperation between Central Asia's domestic violence crisis centres. The forum presented a set of recommendations to the Government and respective ministries have committed to advocate for increased funding.