In her message for International Widow's Day, UN Women Acting Head and Deputy Executive Director Lakshmi Puri, calls on the international community to end discrimination against widows so they can live in dignity and fully participate in society. 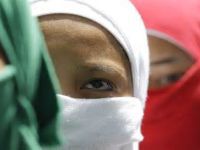 Ms. Puri draws attention to the estimated 115 million widows currently living under the poverty line, and the 81 million who are subjected to physical abuse, often by their own family members.  She underlines that widows are contributors to society as mothers, caregivers and heads of households and that their rights should be upheld by national laws and policies, guided by the Convention on the Elimination of all Forms of Discrimination against Women and the Convention on the Rights of the Child.

We commemorate the third International Widows Day for the hundreds of millions of women in the world who suffer exploitation, deprivation and exclusion when their husbands die. There are more widows than ever before due to armed conflict, the HIV/AIDS pandemic, and the age difference between partners, with many girls being married off to much older men.

Today, we call for stronger action to end widespread discrimination against widows.
Many widows are denied their rights, subjected to abuse and evicted from their homes because they cannot inherit property or land. Widows are forced into exploitative work to support themselves and their families. An estimated 115 million widows currently live in poverty, and 81 million have suffered physical abuse, some from members of their own family. Young widows, who were child brides, face great risk with little protection.

UN Women advocates for the empowerment of widows everywhere and supports this in Asia, Africa and Latin America. We work in partnership with widows' organizations so widows can live free of stigma and discrimination, with dignity, rights and economic independence, and have a voice in decisions that affect their lives in the household and the public sphere.  This is part of our broader work to support women's economic empowerment, political leadership and participation, women's role in peace and security, ending violence against women and girls, and gender-responsive budgeting.

In India, we are working for widows rights so they can move from exclusion to empowerment and shape their futures with confidence and dignity. In Malawi, we support national consultations to secure livelihoods for widows, based on a study on the status and opportunities widows have in the country. In Guatemala, UN Women supports the rights of widows who lost their husbands in internal armed conflict and to secure reparations.

On this International Widows Day, UN Women calls for action to end discrimination against widows so they can live in dignity and enjoy equal rights, opportunities and full participation in society.